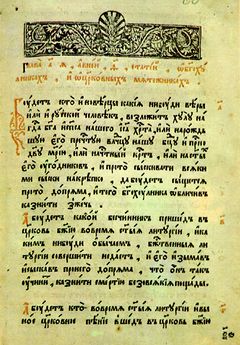 First chapter of the code

The Sobornoye Ulozheniye (Russian: Соборное уложение) was a legal code promulgated in 1649 by the Zemsky Sobor under Alexis of Russia as a replacement for the Sudebnik of 1550 introduced by Ivan IV of Russia. The code survived well into the 19th century (up to 1849), when its articles were revised under the direction of Mikhail Speransky.

The code consolidated Russia's slaves and free peasants into a new serf class and pronounced class hereditary as unchangeable (see Russian serfdom). The new code prohibited travel between towns without an internal passport. Russian nobility agreed to serve in the army, but were granted the exclusive privilege of owning serfs.

The causes of promulgation

As the Time of Troubles ended, a new dynastic government, the Romanovs, commenced active law-making. An intensive growth in the number of edicts ("ukases") since the Sudebnik of 1550 can be seen from the following data:

Overall, in the years 1611-1648, a total of 348 edicts were issued, and in the period of 1550-1648, another 445 edicts. This led to the situation in the Russian state where an immense number of state edicts existed that were not only obsolete, but even contradicted each other.

This chaos was contributed to by the scattering of normative acts throughout different state institutes (traditionally new edicts were made on demand of some prikaz, and after their promulgation were attached to an edict book of this prikaz). There was also an absence of coordination in law application: a new article in this book was often known only to the statesmen of the given prikaz. Also, the casual character of legal rules was becoming inefficient. The legislators now sought to regulate legal rules, that is, to pass on to a normative interpretation of legal rules.

The Salt Riot, which broke out in Moscow in 1648, also contributed to the promulgation of the Sobornoye Ulozheniye, one of the demands of the rioters being to call the Zemsky Sobor and to make a new legal code. The riot was suppressed, but as one of the concessions to the rioters, the czar called the Zemsky Sobor, which continued to work until the promulgation of Sobornoye Ulozheniye in 1649. 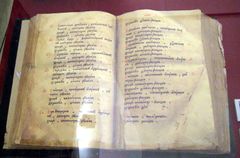 A copy from Ferapontov Monastery

A special committee headed by Prince Nikita Odoyevsky was created to draft the new legal code. Members of the committee included Prince Semyon Prozorovsky, an Okolnichy Prince (one of highest ranks of boyars in old Russia), Fyodor Volkonsky, as well as the scribes Gavrila Leontyev and Fyodor Griboyedov. At that time, the practical job of the Zemsky Sobor began.

The Zemsky Sobor was intended to consider the bill of Ulozhenie. It had many members, including representatives of posad people communities. The Zemsky Sobor consisted of two houses. The Tsar, Boyar Duma and Consecrated Sobor comprised one house, and elected people of different ranks took part in sessions of another house.

Deputies of the Nobility and posad people had a major impact on the adoption of many of the norms of the Ulozhenie. On 29 January 1649, the drafting and editing of the Ulozhenie concluded. The original of this historical document is a scroll consisting of 959 narrow columns. At the end of the document are 315 signatures of Sobor members. The signatures of the scribes are located at the margins of the columns. Centuries later, during the reign of Catherine II, a silver ark was created to store this original scroll. At the present time, the original of the Sobornoye Ulozheniye is housed in the Kremlin Armoury.

Later, a copy of the scroll was transcribed in book format. From this book, the Ulozhenie was reprinted twice in 1649, with 1200 copies made each time. The Sobornoye Ulozheniye of 1649 is considered a new stage in the development of Russian jurisprudence.

All Sobor members endorsed handwritten copies of the Ulozhenie with their signatures, and these copies were then distributed to all state offices (prikazes) in Moscow as a guide for policy and law.

Elected people sent their own amendments and additions to the Duma as petitions of Zemstvo. Some of these were enacted in cooperation with the elected officials, the Duma and the Tsar.

Vasily Klyuchevsky singles out several technical stages at process of lawmaking of Ulozhenie:

The Sobornoe Ulozheniye represents the first attempt by Russian legislators to form system of norms and classify them by areas of law. Significant attention was given to procedural law.

The sources of the Sobornoe Ulozhenie originated both from Russian and international law.