Social anarchism (sometimes referred to as socialist anarchism[1]) is a non-state form of socialism[2] and is generally considered to be the branch of anarchism which sees individual freedom as being dependent upon mutual aid.[3] Social anarchist thought generally emphasizes community and social equality.[3]

Social anarchists advocate the conversion of present-day private property into social property or the commons, while retaining respect for personal property.[4] The term is used specifically to describe those who place a higher emphasis on supporting the communitarian and cooperative aspects of anarchist theory than other anarchists. It is generally considered an umbrella term which includes (but is not limited to) Mutualism, collectivist anarchism, anarchist communism, anarcho-syndicalism, and social ecology.

The term "social anarchism" is often used interchangeably with libertarian socialism,[1] left-libertarianism,[5] or left anarchism.[6] It emerged in the late 19th century as a distinction from individualist anarchism.[7] 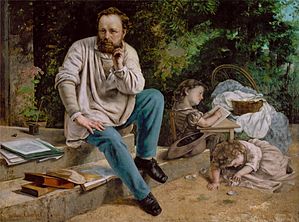 Mutualism emerged from early nineteenth-century socialism, and is generally considered a market-oriented strand within the libertarian socialist tradition. Mutualists typically accept property rights, but with brief abandonment time periods. In a community in which mutuality property rules were upheld, a landowner would need to make (more or less) continuous use of his/her land; if he/she failed to do so, his/her ownership rights would be extinguished and the land could be homesteaded by someone else. A mutualist property regime is often described as one rooted in "possession," "occupancy-and-use," or "usufruct."[8] Nevertheless, Mutualism is also associated with the economic views of 19th century US individualist anarchists such as Benjamin Tucker and William Batchelder Greene[9] and today Kevin Carson is a contemporary mutualist and author of Studies in Mutualist Political Economy who describes this work as "an attempt to revive individualist anarchist political economy, to incorporate the useful developments of the last hundred years, and to make it relevant to the problems of the twenty-first century."[10] 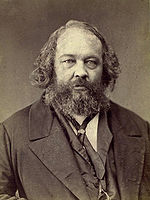 Collectivist anarchism (also known as anarcho-collectivism)[11][12] is a revolutionary form of anarchism, commonly associated with Mikhail Bakunin and Johann Most.[13][14] It is a specific tendency, not to be confused with the broad category sometimes called collectivist or communitarian anarchism.[15] Unlike mutualists, collectivist anarchists oppose all private ownership of the means of production, instead advocating that ownership be collectivized.

This was to be achieved through violent revolution, first starting with a small cohesive group through acts of violence, or "propaganda by the deed," which would inspire the workers as a whole to revolt and forcibly collectivize the means of production.[13] However, collectivization was not to be extended to the distribution of income, as workers would be paid according to time worked, rather than receiving goods being distributed "according to need" as in anarcho-communism. This position was criticised by later anarcho-communists as effectively "uphold[ing] the wages system".[16]

Anarchist communist and collectivist ideas were not mutually exclusive; although the collectivist anarchists advocated compensation for labor, some held out the possibility of a post-revolutionary transition to a communist system of distribution according to need.[17] Collectivist anarchism arose contemporaneously with Marxism but opposed the Marxist dictatorship of the proletariat, despite the stated Marxist goal of a collectivist stateless society.[18] 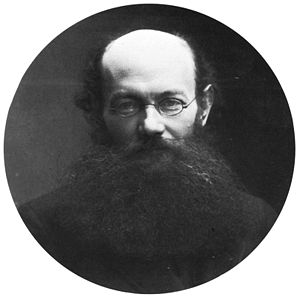 Anarcho-communist Peter Kropotkin believed that in anarchy, workers would spontaneously self-organize to produce goods for all of society.

Anarchist communism (also known as anarcho-communism and occasionally as free communism) is a theory of anarchism which advocates the abolition of the state, markets, money, capitalism and private property (anarchist communists believe in converting private property into the commons or public goods, while retaining respect for personal property), in favor of common ownership of the means of production,[19][20] direct democracy and a horizontal network of voluntary associations and workers' councils with production and consumption based on the guiding principle: "from each according to his ability, to each according to his need".[21][22]

Anarcho-communism developed out of radical socialist currents after the French revolution,[30][31] but was first formulated as such in the Italian section of the First International.[32] The theoretical work of Peter Kropotkin took importance later as it expanded and developed pro-organizationalist and insurrectionary anti-organizationalist sections.[33]

To date, the best known examples of an anarchist communist society (i.e., established around the ideas as they exist today and achieving worldwide attention and knowledge in the historical canon), are the anarchist territories during the Spanish Revolution[34] and the Free Territory during the Russian Revolution. Through the efforts and influence of the Spanish Anarchists during the Spanish Revolution within the Spanish Civil War, starting in 1936 anarchist communism existed in most of Aragon, parts of the Levante and Andalusia, as well as in the stronghold of Anarchist Catalonia before being crushed by the combined forces of the regime that won the war, Hitler, Mussolini, Spanish Communist Party repression (backed by the USSR) as well as economic and armaments blockades from the capitalist countries and the Spanish Republic itself.[35] During the Russian Revolution, anarchists such as Nestor Makhno worked to create and defend—through the Revolutionary Insurrectionary Army of Ukraine—anarchist communism in the Free Territory of the Ukraine from 1919 before being conquered by the Bolsheviks in 1921. 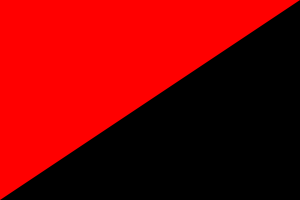 In the early 20th century, anarcho-syndicalism arose as a distinct school of thought within anarchism.[36] With greater focus on the labour movement than previous forms of anarchism, syndicalism posits radical trade unions as a potential force for revolutionary social change, replacing capitalism and the state with a new society, democratically self-managed by the workers.

Anarcho-syndicalists seek to abolish the wage system and private ownership of the means of production, which they believe lead to class divisions. Important principles include workers' solidarity, direct action (such as general strikes and workplace recuperations), and workers' self-management. This is compatible with other branches of anarchism, and anarcho-syndicalists often subscribe to anarchist communist or collectivist anarchist economic systems.[37]

Its advocates propose labour organization as a means to create the foundations of a trade union centered anarchist society within the current system and bring about social revolution. An early leading anarcho-syndicalist thinker was Rudolf Rocker, whose 1938 pamphlet Anarchosyndicalism outlined a view of the movement's origin, aims and importance to the future of labour.[37][38]

Although more often associated with labor struggles of the early 20th century (particularly in France and Spain), many syndicalist organizations are active today, united across national borders by membership in the International Workers Association, including the Central Organisation of the Workers of Sweden (SAC) in Sweden, the Unione Sindacale Italiana (USI) in Italy, the CNT and the CGT in Spain, the Workers' Solidarity Movement (WSM) of Ireland, and the Industrial Workers of the World in the United States.

Platformism is a tendency (or organized school of thought) within the anarchist movement. It stresses the need for tightly organized anarchist organizations, that are able to influence working class and peasant movements. It is in many ways identical to especifismo, and has an antecedent in the work of Mikhail Bakunin.

"Platformist" groups reject the model of Leninist vanguardism. They aim, instead, to "make anarchist ideas the leading ideas within the class struggle".[39] The four main principles by which an anarchist organisation should operate, according to Platformists, are ideological unity, tactical unity, collective responsibility, and federalism. In general, platformist groups aim to win the widest possible influence for anarchist ideas and methods in the working class and peasantry—like especifismo groups, platformists orient towards "ordinary" people, rather than to the extreme left milieu. This usually entailing a willingness to work in single-issue campaigns, trade unionism and community groups, and to fight for immediate reforms while linking this to a project of building popular consciousness and organisation. They therefore reject approaches that they believe will prevent this, such as insurrectionist anarchism, as well as "views that dismiss activity in the unions" or that dismiss anti-imperialist movements.[40]

The name "Platformist" derives from the 1926 Organisational Platform of the General Union of Anarchists (Draft).[41] This was published by the Group of Russian Anarchists Abroad, in their journal Dielo Truda ("Workers' Cause" in Russian). The group, which consisted of exiled Russian anarchist veterans of the 1917 October Revolution (notably Nestor Makhno who played a leading role in the anarchist revolution in the Ukraine of 1918–1921), based the Platform on their experiences of the revolution, and the eventual victory of the Bolsheviks over the anarchists and other groups. The Platform attempted to address and explain the anarchist movement's failures during the Russian Revolution outside of the Ukraine.

The document drew both praise and criticism from anarchists worldwide and sparked a major debate within the anarchist movement.[42] Today "Platformism" is an important current in international anarchism. Around thirty platformist and especifista organisations are linked together in the Anarkismo.net project, including groups from Africa, Latin America, North America and Europe.[40]

According to Arran Gare, Towards an Inclusive Democracy "offers a powerful new interpretation of the history and destructive dynamics of the market and provides an inspiring new vision of the future in place of both neo-liberalism and existing forms of socialism".[43] Also, as David Freeman points out, although Fotopoulos' approach "is not openly anarchism, yet anarchism seems the formal category within which he works, given his commitment to direct democracy, municipalism and abolition of state, money and market economy".[44]

Parecon is an economic system proposed primarily by activist and political theorist Michael Albert and radical economist Robin Hahnel, among others. It uses participatory decision making as an economic mechanism to guide the production, consumption and allocation of resources in a given society. Proposed as an alternative to contemporary capitalist market economies and also an alternative to centrally planned socialism or coordinatorism, it is described as "an anarchistic economic vision", and it could be considered a form of socialism as under Parecon, the means of production are owned by the workers. The underlying values that Parecon seeks to implement are equity, solidarity, diversity, workers' self-management and efficiency. (Efficiency here means accomplishing goals without wasting valued assets.) It proposes to attain these ends mainly through the following principles and institutions: Workers' and consumers' councils utilizing self-managerial methods for decision making, balanced job complexes, remuneration according to effort and sacrifice, and Participatory Planning.

Under Parecon, the current monetary system would be replaced with a system of non-transferable "credit" which would cease to exist upon purchase of a commodity.

Parpolity is a theoretical political system proposed by Stephen R. Shalom. It was developed as a political vision to accompany Parecon. The values on which Parpolity is based are: Freedom, self-management, justice, solidarity and tolerance. The goal, according to Shalom, is to create a political system that will allow people to participate, as much as possible in a face to face manner. Participism as a whole is critical of aspects of modern representative democracies and capitalism arguing that the level of political control by the people isn’t sufficient. To address this problem Parpolity suggests a system of "Nested Councils", which would include every adult member of a given society. With five levels of nested councils it is thought, could represent the population of the United States.

Under Participism, the state as such would dissolve into a mere coordinating body made up of delegates which would be recallable at any time by the nested council below them. 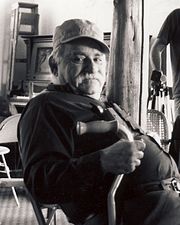 Bookchin later developed a political philosophy to complement social ecology which he called "Communalism" (spelled with a capital "C" to differentiate it from other forms of communalism). While originally conceived as a form of Social anarchism, he later developed Communalism into a separate ideology which incorporates what he saw as the most beneficial elements of Anarchism, Marxism, syndicalism, and radical ecology.

Politically, Communalists advocate a network of directly democratic citizens' assemblies in individual communities/cities organized in a confederal fashion. This method used to achieve this is called Libertarian Municipalism which involves the establishment of face-to-face democratic institutions which are to grow and expand confederally with the goal of eventually replacing the nation-state. Unlike anarchists, Communalists are not opposed to taking part in parliamentary politics—especially municipal elections—as long as candidates are libertarian socialist and anti-statist in outlook.