Social centers (or social centres) are community spaces. They are buildings which are used for a range of disparate activities, which can be linked only by being not-for-profit. They might be organizing centers for local activities or they might provide support networks for minority groups such as prisoners and refugees. Often they provide a base for initiatives such as cafes, free shops, public computer labs, graffiti murals, legal collectives and free housing for travellers. The services are determined by both the needs of the community in which the social center is based and the skills which the participants have to offer.[1]

Social centers tend to be in large buildings and thus can host activist meetings, concerts, bookshops, dance performances and art exhibitions. Social centers are common in many European cities, sometimes in squats, sometimes in rented buildings. Ben Franks and Ruth Kinna write that "The development of social centres, which are hubs for cultural and cultural activity, as well as venues for more formal political organising, have been a stable (and growing) feature of Britain’s radical political scene, often driven by anarchists."[2] 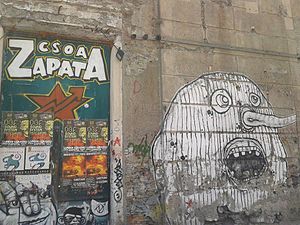 Also known as a free space, social centers may be designated "safe-space" where specific forms of dialogue and activism are encouraged and protected from harassment, or they may be intended to serve as open space for community interaction among widely disparate groups without censorship. There is a great deal of overlap between the two types.[citation needed]

Social centers that are open to the general public are also part of the general third place movement in community building. Third places which include small commercial or non-reclaimed urban spaces (or reclaimed from commercial activity towards cooperative use) such as community coffee houses may serve a similar function with or without an organizing focus besides localism.

Social centers provide a place to socialize in a bar, cafe or music venue. They also provide access to alternative, hard to access information through projects such as libraries, infoshops, film nights and talks.

The projects are usually run on an entirely voluntary basis by the people involved, who are neither charity workers nor social workers. The projects are run in the spirit of co-operation, solidarity and mutual aid. Other activities organized include events, meetings, exhibitions, classes and workshops on a range of topics.

Whilst every individual case is different, most centers are run on the basis of non-hierarchical consensus decision-making. Most centers lean to the left politically, including anarchist, autonomist or communist viewpoints. Centers tend to adopt an ethical vegan philosophy, whilst accepting that individuals involved may have differing personal lifestyles. Individual are often artivists.

Writer-activist Naomi Klein reports that many "Social centres are abandoned buildings - warehouses, factories, military forts, schools - that have been occupied by squatters and transformed into cultural and political hubs, explicitly free from both the market, and from state control."[3]

Seomra Spraoi (English: Play Room) in Dublin has occupied various locations since 2004, the most recent since 2008. Seomra Spraoi closed in 2015.

The social center concept has taken root most successfully in Italy, beginning in the 1970s. Large factories and even abandoned military barracks have been "appropriated" for use as social centers. There are today dozens of social centers in Italy, often denoted by the initials CSOA (Centro Sociale Occupato Autogestito). Examples include Pedro and Gramigna in Padova, Spartaco in Ravenna, Officina 99 in Naples, Forte Prenestino and Corto Circuito in Rome, Cox 18 and Leoncavallo in Milan, CPA Centro Popolare Autogestito Firenze Sud in Florence and Anomalia in Palermo.[5] 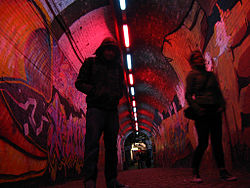 The entrance of the Forte Prenestino Social Center in Rome, Italy.

Historically, there has been a relationship between the Italian social centers and the Autonomia movement (specifically Lotta Continua).[6] 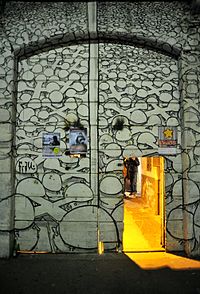 One of the entrances to Cox 18.

Social centers in Italy continue to be centers of political/social dissent. Notoriously the Tute Bianche and Ya Basta Association developed directly out of the social center movement, and many social forums take place in social centers. They are also used for hacklabs, activist copyleft centers (for example, LOA Hacklab in Milan).

Since the 1960s, there has been a long and continuous tradition of squatted social centers in the Netherlands, particularly in the capital, Amsterdam.

In Leiden the Eurodusnie Collective provided a service to the community by running a free shop and a cafe/bar, until they were evicted from the Koppenhinksteeg in 2010.[7]

In Den Haag there was the De Blauwe Aanslag, which was used for 23 years.

In Amsterdam, the ASCII center provided free internet to its 'customers' from 1997 onwards before mutating into a hacklab. The Overtoom301 squat has a cafe, a non-profit printshop and a music venue. Vrankrijk is open seven days a week, hosting a range of projects including a kraakspreekuur (squatters' advice hour), a bar, a queer night and benefit events. The Occii is a busy music venue and children's theater.

In Rotterdam, the Poortgebouw hosts a cafe on Wednesdays. WORM is an active centre for avant gardistic[peacock term] recreation.

In Utrecht there is the ACU, a political left wing orientated squatting social centre, with a bar, a vegan restaurant and a music venue.[8] 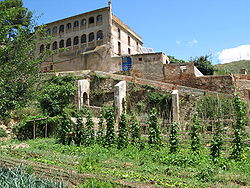 Can Masdeu has some of the largest community gardens in Barcelona.

In Barcelona, there is a tight network of squatted social centers which publishes a weekly newspaper InfoUsurpa detailing activities and news. The paper is fly-posted on the doors of the squats themselves. As a result of the relaxed attitude of shop-owners towards dumpster diving there are free food cafes every night, often vegan. Other squats offer free music or free internet.

The Eskalera Karakola is a feminist social center in Madrid. Also, in cities like Madrid, there is a movement of this kind of social center that offer free activities such as language teaching, communal meals, and space for musicians to practice, such as La Tabacalera, El Dragon and La Casika in Mostoles. 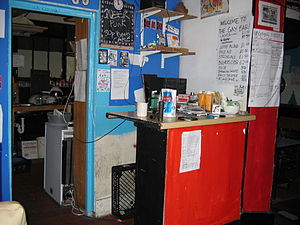 Antecedents of the social center concept in the eighties include projects such as the Centro Iberico and the Wapping Autonomy Centre (1981–82).

Elsewhere in the UK, there is,[13] Oxford Action Resource Centre, Kebele in Bristol,[14] the Sumac Centre in Nottingham, The 1 in 12 Club in Bradford, the Cowley Club in Brighton. In the past notable centres have included The Basement in Manchester, Justice not crisis in Birmingham, The PAD in Cardiff,[15] Next To Nowhere in Liverpool,[16] Forest Café in Edinburgh, Giros in Belfast, Matilda Centre in Sheffield and the Common Place in Leeds.

The centres are interlinked by the UK Social Centre Network that aims to connect "the growing number of autonomous spaces to share resources, ideas and information".[10][17][18] This network draws a very clear distinction between the many autonomous social centers on the country on one side and the state or large NGO-sponsored community centers on the other.[19]

There are social centres in many cities across Europe, such as Hirvitalo in Finland, Blitz in Oslo, Scheld'apen in Antwerp and MoË in Vienna. Some projects have successfully institutionalised, for example, Ernst-Kirchweger-Haus in Vienna.