Social cost in economics may be distinguished from "private cost".[1] Economic theorists model individual decision-making as measurement of costs and benefits. Social cost is also considered to be the private cost plus externalities.[2] Rational choice theory often assumes that individuals consider only the costs they themselves bear when making decisions, not the costs that may be borne by others.

With pure private costs, the costs carried by the individuals involved are the only economically meaningful costs. The choice to purchase a glass of lemonade at a lemonade stand has little consequence for anyone other than the seller or the buyer. The costs involved in this economic activity are the costs of the lemons and the sugar and the water that are ingredients to the lemonade, the opportunity cost of the labour to combine them into lemonade, as well as any transaction costs, such as walking to the stand.

If there is a negative externality, then social costs will be greater than private costs. Environmental pollution is an example of a social cost that is seldom borne completely by the polluter, thereby creating a negative externality. If there is a positive externality, then one will have higher social benefits than private benefits. For example, when a supplier of educational services indirectly benefits society as a whole but only receives payment for the direct benefit received by the recipient of the education: the benefit to society of an educated populace is a positive externality. In either case, economists refer to this as market failure because resources will be allocated inefficiently. In the case of negative externalities, private agents will engage in too much of the activity; in the case of positive externalities, they will engage in too little. (The marginal rate of transformation in production will not be equal to the marginal rate of substitution in consumption due to the effect of the externality and as a result Pareto optimality will not occur—see welfare economics for an explanation.)

The ideas of social cost, externalities, and market failure are often used as an argument for government intervention in the form of regulations. Libertarians who believe in a free market respond that the existence of market failure should not lead to government intervention, as they suspect that the proposed solution will itself be vulnerable to government failure. They prefer to rely on tradition, community pressure, and dollar voting.

Negative externalities (external costs) lead to an over-production of those goods that have a high social cost. For example, the logging of trees for timber may result in society losing a recreation area, shade, beauty, good quality soil to grow crops on, and air quality but this loss is usually not quantified and included in the price of the timber that is made from the trees. As a result, individual entities in the marketplace have no incentive to factor in these externalities. More of this activity is performed than would be if its cost had a true accounting. 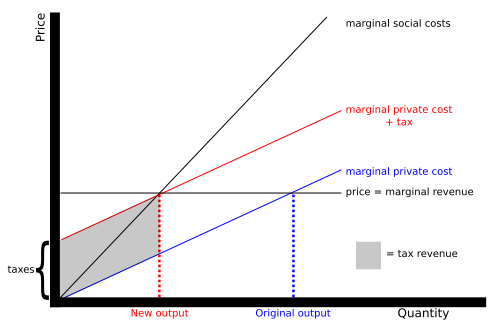 This can be illustrated with a diagram. Profit-maximizing organizations will set output at Qp where marginal private costs (MPC) is equal to marginal revenue (MR). (This diagram assumes perfect competition, under which price (P) equals MR.) This will yield a profit shown by the triangular area 0,C,F.

But if externalities are present, the attainment of social optimality requires that the full social costs must be considered. The socially optimum level of output is Qs where marginal social costs (MSC) or referred to as the Marginal Social Damage(MSD) is equal to marginal revenue (MR). The amount of output, Qp minus Qs, indicates the excess output due to the externality. Profits will decrease also, from 0,C,F to 0,A,F. It is clearly profitable for the firm to pollute, since "internalizing the externality" hurts profits. The amount of the externality will decrease from C,D to B,A.

Institutional ecological economists in the tradition of Karl William Kapp provide a different definition of social costs, i.e. that share of the total costs of production that is not born by producers but is shifted to 3rd parties, future generations or society at large. Kapp, hence, rejected Pigou's confusing terminology of externalities and provides several hundred pages of empirical data to support his argument that social costs are systemic, i.e. rooted in profit maximizing behavior of businesses, and an enormous problem of modern civilization. In the real world, they are usually not or cannot be internalized and must not be considered as accidental minor aberration from the "optimal norm" that can be fixed with ad hoc measures proposed by Pigou or Coase. Kapp proposes to prevent damages ex ante via precautionary regulations that reflect socially determined safety standards, instead of ex post via monetary schemes like taxation (e.g. Pigou) or bargaining (e.g. Coase).