The Socialist Soviet Republic of Abkhazia (Russian: Социалистическая Советская Республика Абхазия; Sotsalisticheskaya Sovetskaya Respublika Abkhaziya), was a short-lived Soviet republic[2] in the territory of Abkhazia that existed from 31 March 1921 to 19 February 1931. It was an independent state from 21 May to 16 December 1921, when Abkhazia became a federal part of the Georgian SSR. SSR Abkhazia never became a Union-level republic within the Soviet Union, despite the explicit expression of willingness and intent in its 1925 Constitution (Article 4).[1] It had a special status of a “treaty republic” associated with the Georgian Soviet Socialist Republic[3] through which Abkhazia was part of the Transcaucasian Soviet Federative Socialist Republic (since 12 March 1922) and thus also part of the Soviet Union (the Transcaucasian SFSR was a Union-level republic of the USSR from 1922 to 1936). The SSR Abkhazia was abolished in 1931 and transformed into the Abkhaz Autonomous Soviet Socialist Republic within the Georgian SSR.

Abkhazia, hitherto an autonomous province within the Democratic Republic of Georgia, came under the Soviet control in the course of the Soviet Russian Red Army invasion of February–March 1921. On March 4, 1921, the Red Army, in conjunction with local revolutionary guerrillas, took control of Abkhazia’s capital, Sukhumi, where a provisional Soviet administration – the Abkhaz Revolutionary committee (Revkom) – was established. On March 31, 1921, a special conference attended by Sergo Orjonikidze, Shalva Eliava, Efrem Eshba and Nestor Lakoba, declared the SSR of Abkhazia, but the question of the form of the republic's relations with both Georgia and Russia was left open. On May 21, 1921, the Georgian Revkom welcomed the formation of the "independent Socialist Soviet Republic of Abkhazia", and said the form of relations should be settled by the first Workers' Congresses of both republics.[4]

Finally, on December 16, 1921, Abkhazia signed a special treaty of alliance delegating some of its sovereign powers to the Georgian SSR. The treaty defined Abkhazia’s status as a “contractual republic” (Russian: договорная республика) and established a military, political and financial union between the two Soviet republics, subordinating the SSR of Abkhazia to the Georgian SSR in some of these areas. Thus, through the Georgian SSR, Abkhazia joined the Transcaucasian Soviet Federative Socialist Republic on March 12, 1922 and the Soviet Union on December 30, 1922.[5][6] 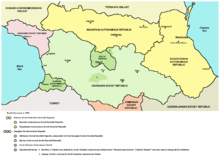 A map of the Socialist Soviet Republic of Abkhazia, showing it in relation to the rest of the Caucasus in 1922

Abkhazia's ambiguous status of a "contractual republic" was written down into that republic’s April 1, 1925 Constitution which specified that "the SSR of Abkhazia, having united with the SSR of Georgia on the basis of a special treaty of union" was, through it, a part of the Transcaucasian SFSR and the USSR.[7] However, the 1924 Soviet Constitution earlier referred to Abkhazia as an autonomous republic.[8]

On February 19, 1931, Abkhazia’s republican status was downgraded, on the orders of Joseph Stalin, to that of an Autonomous Soviet Socialist Republic within the Georgian SSR, reputedly as punishment of the Abkhaz Communist leadership under Nestor Lakoba for their failure to overcome the peasants' resistance to collectivization.[9]