Sociology of race and ethnic relations

The sociology of race and ethnic relations is the study of social, political, and economic relations between races and ethnicities at all levels of society. This area encompasses the study of racism, residential segregation, and other complex social processes between different racial and ethnic groups. The sociological analysis of race and ethnicity frequently interacts with other areas of sociology such as stratification and social psychology, as well as with postcolonial theory.

At the level of political policy, ethnic relations is discussed in terms of either assimilationism or multiculturalism. Anti-racism forms another style of policy, particularly popular in the 1960s and 1970s. At the level of academic inquiry, ethnic relations is discussed either by the experiences of individual racial-ethnic groups or else by overarching theoretical issues.

Weber laid the foundations for a micro-sociology of ethnic relations beginning in 1906. Weber argued that biological traits could not be the basis for group foundation unless they were conceived as shared characteristics. It was this shared perception and common customs that create and distinguish one ethnicity from another. This differs from the views of many of his contemporaries who believed that an ethnic group was formed from biological similarities alone apart from social perception of membership in a group.[2]

W.E.B. Du Bois is well known as one of the most influential black scholars and activists of the 20th century. Du Bois educated himself on his people, and sought academia as a way to enlighten others on the social injustices against his people. Du Bois research "revealed the Negro group as a symptom, not a cause; as a striving, palpitating group, and not an inert, sick body of crime; as a long historic development and not a transient occurrence."[3] Du Bois believed that Black Americans should embrace higher education and use their new access to schooling to achieve a higher position within society. He referred to this idea as the Talented Tenth. With gaining popularity, he also preached the belief that for blacks to be free in some places, they must be free everywhere. After traveling to Africa and Russia, he recanted his original philosophy of integration and acknowledged it as a long term vision.[4]

Booker T. Washington was considered one of the most influential black educators of the 19th and 20th centuries. Washington offered an industrial education for Blacks through the Tuskegee Institute. He hoped to provide them with an education to escape sharecropping and debt, instead engaging in self-employment, land ownership, and small business. His theory regarding race in America advocated to continue black disfranchisement and segregation, in return for the whites support in economic and educational attainment. This theory highlighted the accommodationist philosophy he became well known for. However, he contributed secretly and substantially to legal challenges against segregation and disfranchisement of blacks.[5] 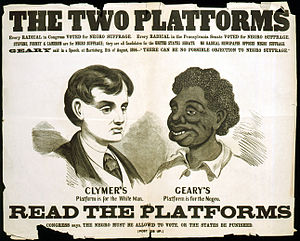 A racist political campaign poster from the 1866 Pennsylvania gubernatorial election

One of the most important social psychological findings concerning race relations is that members of stereotyped groups internalize those stereotypes and thus suffer a wide range of harmful consequences. For example, in a phenomenon called stereotype threat, members of racial and ethnic groups that are stereotyped as scoring poorly on tests will perform poorer on those tests if they are reminded of this stereotype.[6] The effect is so strong that even simply asking the test-taker to state her or his race before taking the test (such is by bubbling in "African American" on a multiple choice question) will significantly alter test performance.[7] A specifically sociological contribution to this line of research has found that such negative stereotypes can be created on the spot: an experiment by Michael Lovaglia et al.(1998) demonstrated that left-handed people can be made to suffer stereotype threat if they are led to believe that they are a disadvantaged group for a particular kind of test.[8]

Psychoanalysis has much to offer the study of racism.[9] Its central proposition is that rationality is not the natural state of the individual, and that individuals develop defence mechanisms to cope with anxiety. Humans resist change because change threatens established ways of dealing with anxiety.[10] Individual defence mechanisms contribute to social defence mechanisms. The most regressive defence mechanism (the 'paranoid-schizoid' position) results in a complete dehumanising of the ‘all-bad’ group.[11] The ‘all-bad’ group is admired as well as feared (often evident in the conspiracy theory). Paradoxically, the arbitrariness of the category ‘race’ enables the psychotic subject to invest more meaning in it.[12]

Modernity’s attempt at rationalisation papers over a polycentric psyche (i.e. all of us still have anxieties and desires, despite our apparent rationality). Racism is a response to the abstracting logic of modernity. The rationality of western, ‘white’ society is defined in opposition to the ‘animality’ of black, ‘primitive’ society.[13]

Another important line of research on race takes the form of audit studies. The audit study approach creates an artificial pool of people among whom there are no average differences by race. For instance, groups of white and black auditors are matched on every category other than their race, and thoroughly trained to act in identical ways. Given nearly identical resumes, they are sent to interview for the same jobs. Simple comparisons of means can yield strong evidence regarding discrimination. The best known audit study in sociology is The Mark of a Criminal Record by Harvard University sociologist Devah Pager. This study compares job prospects of black and white men who were recently released from jail. Its key finding is that blacks are significantly discriminated against when applying for service jobs. Moreover, whites with a criminal record have about the same prospect of getting an interview as blacks without one.[14] Another recent audit by Pennsylvania State University sociologist S. Michael Gaddis examines the job prospects of black and white college graduates from elite private and high quality state higher education institutions. This research finds that blacks who graduate from an elite school such as Harvard have about the same prospect of getting an interview as whites who graduate from a state school such as UMass Amherst.[15]

In the United States, the study of racial and ethnic relations has been widely influenced by the factors associated with each major wave of immigration as the incoming group struggles with keeping its own cultural and ethnic identity while also assimilating into the broader mainstream American culture and economy. One of the first and most prevalent topics within American study is that of the relations between white Americans and African Americans due to the heavy collective memory and culture borne out of and lingering from centuries of forced slavery in plantations. Throughout the rest of American history, each new wave of immigration to the United States has brought another set of issues as the tension between maintaining diversity and assimilating takes on new shapes. Racism and conflict often rears up during these times.[16]

In the United Kingdom, foreign nationals were actively encouraged and sponsored to migrate in the 1950s after the dissolution of the Empire and the social devastation of the Second World War. The 1962 Commonwealth Immigrants Act changed the law so that only certain British Commonwealth members were able to migrate. This law was tightened again with the Commonwealth Immigrants Act 1968 and Immigration Act 1971. The Race Relations Act 1968 extended certain policies with respect to employment, housing, commercial and other services. This was extended again with the Race Relations Act 1976.

As with the UK establishments of media and cultural studies, 'ethnic relations' is often taught as a loosely distinct discipline either within sociology departments or other schools of humanities.