Born in the town of Rylsk, she graduated from the Moscow State University, specializing in the field of law. Unable to find a position in prosecutor's office, she began her activity as public defender at the Moscow College of Advocates (Московская Коллегия адвокатов). According to rumors, in the 1960s, the officer who was issuing her with a new passport, misspelled the last name "Kallistratova" as "Kalistratova". Sofiya did not make a big deal out of it and signed the documents as Kalistratova ever since.[citation needed]

She joined the Moscow Helsinki Group as a legal consultant. The KGB searched Kalistratova's apartment several times and confiscated typewriters and documents. Some of Kalistratova's friends were arrested. The activity of the Moscow Helsinki Group became impossible, while the head of the KGB, Yuri Andropov, was making his career out of the repression of dissidents.[1] Supporters claim that all their work defending the human right to obtain, discuss, and distribute information was legal.[2][3]

As with many other defenders of human rights, she was accused of anti-Soviet activity (more precisely by article 190-1 of the Code of USSR, distribution of presumably wrong opinions which defame the Soviet government and public order. The case against her started in 1981 was dropped, with reasons for discontinuing, but Kalistratova insisted in her innocence, and the formula was changed and reported as absence of any criminal element in her activity.[citation needed] 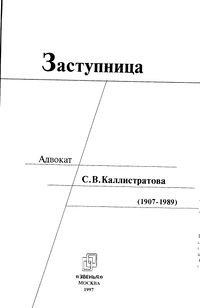 Protectress, the 1997 book about Kalistratova

In 1987, she tried to initiate a campaign for amnesty for political prisoners.[4]

During perestroika and glasnost, material regarding violations of the law between 1917 and 1985 were published in the mass media. The popular question of correspondents of newspapers was: "In your family, how have your views on the politics of the Soviet Union changed since Glasnost?", and the relatives of Kalistratova could answer: Our point of view did not change during this glasnost. That time, various literators[clarification needed] used to say "We did not know" about the period 1917–1986, and, especially, about the Brezhnev stagnation (1966–1985). She usually replied: "You are lying. You do not look like an idiot. You DID know, but you were afraid to talk about it."[5]

She died in 1989 and was interred in Vostryakovskoye Cemetery in Moscow. For her activism, she was awarded the medal of the Guild of Russian Advocates. In 2003, a book about her life was published.[6]