A need to recognize acts of heroism in 1922 resulted in the War Department's issuing orders for acts of bravery during peacetime. This led to an Act of Congress (Public Law 446-69th Congress, July 2, 1926 (44 Stat. 780)) which established the Soldier’s Medal for acts of heroism not involving actual conflict with an enemy. The Secretary of War directed that the Quartermaster General prepare and submit appropriate designs of the Soldier’s Medal per letter signed by The Adjutant General dated 11 August 1926.[2] The Soldier's Medal is considered to be equivalent to the Navy and Marine Corps Medal, Airman's Medal, and the Coast Guard Medal.

The first Soldier's Medals were awarded on October 17, 1927 to John F. Burns and James P. Martin[4] for their heroism during a fire and to James K. Wilson[5] and Cleophas C. Burnett[6] for saving people from drowning.[7]

The period of time when the most Soldier's Medals were awarded was World War II (at least hundreds were awarded).

The distinguishing criterion for awarding the Soldier's Medal, per Army Regulation 600-8-22, para 3-13, is "The performance must have involved personal hazard or danger and the voluntary risk of life under conditions not involving conflict with an armed enemy. Awards will not be made solely on the basis of having saved a life."[3] It is the highest honor a soldier can receive for an act of valor in a non-combat situation, held to be equal to or greater than the level which would have justified an award of the Distinguished Flying Cross had the act occurred in combat. Any enlisted American servicemember who is eligible for retirement pay will receive an increase of 10 percent in retirement pay, if the level of valor was equal to that which would earn the Distinguished Service Cross. Additional awards of the medal are denoted by oak leaf clusters worn on the suspension and service ribbon of the medal.[2][3]

The bronze medal is issued as a 1 3/8 inch wide Bronze octagon with an eagle displayed, standing on a fasces, between two groups of stars of six and seven, above the group of six a spray of leaves. On the reverse is a shield paly of 13 pieces, on the chief the letters “US”, supported by sprays of laurel and oak, around the upper edge the inscription “SOLDIER’S MEDAL” and across the face the words “FOR VALOR.” In the base is a panel for the name of the recipient to be engraved. The medal is suspended from the ribbon by a rectangular-shaped metal loop with corners rounded. 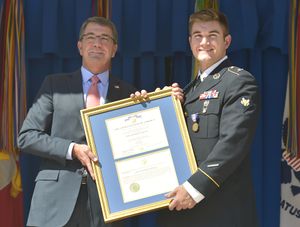