From Infogalactic: the planetary knowledge core
Jump to: navigation, search
For other uses, see Solidarity (disambiguation).

Solidarity is unity (as of a group or class) which produces or is based on unities of interests, objectives, standards, and sympathies.[1][2] It refers to the ties in a society that bind people together as one. The term is generally employed in sociology and the other social sciences as well as in philosophy or in Catholic social teaching.[3]

What forms the basis of solidarity varies between societies. In simple societies it may be mainly based on kinship and shared values. In more complex societies there are various theories as to what contributes to a sense of social solidarity.[1]

Solidarity is also one of six principles of the Charter of Fundamental Rights of the European Union[4] and December 20 of each year is International Human Solidarity Day recognized as an international observance.

According to Émile Durkheim, the types of social solidarity correlate with types of society. Durkheim introduced the terms "mechanical" and "organic solidarity" as part of his theory of the development of societies in The Division of Labour in Society (1893). In a society exhibiting mechanical solidarity, its cohesion and integration comes from the homogeneity of individuals—people feel connected through similar work, educational and religious training, and lifestyle. Mechanical solidarity normally operates in "traditional" and small scale societies.[5] In simpler societies (e.g., tribal), solidarity is usually based on kinship ties of familial networks. Organic solidarity comes from the interdependence that arises from specialization of work and the complementarities between people—a development which occurs in "modern" and "industrial" societies.[5]

Although individuals perform different tasks and often have different values and interest, the order and very solidarity of society depends on their reliance on each other to perform their specified tasks. Organic here is referring to the interdependence of the component parts. Thus social solidarity is maintained in more complex societies through the interdependence of its component parts (e.g., farmers produce the food to feed the factory workers who produce the tractors that allow the farmer to produce the food). 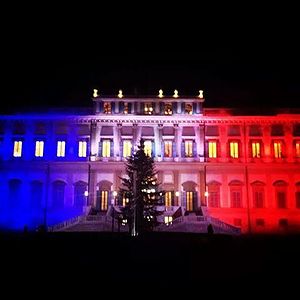 Tributes to the victims of Charlie Hebdo shooting at the Royal Villa of Monza, Italy, on 10 January 2015

A connection between the biological and the social was of principal importance for the idea of solidarity as expressed by the anarchist ideologist and former Prince Peter Kropotkin (1842–1921). In his most famous book "Mutual Aid: A Factor of Evolution" (1902), written partly in response to Huxleyan Social Darwinism, Kropotkin studied the use of cooperation as a survival mechanism in human societies at their various stages, as well as with animals. According to him, mutual aid, or cooperation, within a species has been an important factor in the evolution of social institutions. Solidarity is essential for mutual aid; supportive activity towards other people does not result from the expectation of reward, but rather from instinctive feelings of solidarity.

In his introduction to the book, Kropotkin wrote: “The number and importance of mutual-aid institutions which were developed by the creative genius of the savage and half-savage masses, during the earliest clan-period of mankind and still more during the next village-community period, and the immense influence which these early institutions have exercised upon the subsequent development of mankind, down to the present times, induced me to extend my researches to the later, historical periods as well; especially, to study that most interesting period – the free medieval city republics, whose universality and influence upon our modern civilization have not yet been duly appreciated. And finally, I have tried to indicate in brief the immense importance which the mutual-support instincts, inherited by mankind from its extremely long evolution, play even now in our modern society, which is supposed to rest upon the principle "every one for himself, and the State for all," but which it never has succeeded, nor will succeed in realizing”.[6] Kropotkin advocated an alternative economic and social system, which would be coordinated through a horizontal network of voluntary associations with goods distributed in compliance with the physical needs of the individual, rather than according to labor.[7]

Solidarity is an emerging concept in contemporary philosophy – it is subject to ongoing studies in various subfields of ethics and political philosophy.[8]

One notable approach in bioethics is to identify solidarity primarily as a three-tiered practice enacted at the interpersonal, communal, and contractual and legal levels.[9] This approach is driven by the quest to differentiate between the diverse applications of the concept and to clarify its meaning, both historically and in terms of its potential as a fruitful concept for contemporary moral, social and political issues.[10]

Solidarity is an integral element of Catholic social teaching. According to Pope Francis:

No one can remain insensitive to the inequalities that persist in the world ... the Brazilian people, particularly the humblest among you, can offer the world a valuable lesson in solidarity, a word that is too often forgotten or silenced because it is uncomfortable ... I would like to make an appeal to those in possession of greater resources, to public authorities and to all people of good will who are working for social justice: never tire of working for a more just world, marked by greater solidarity[11]