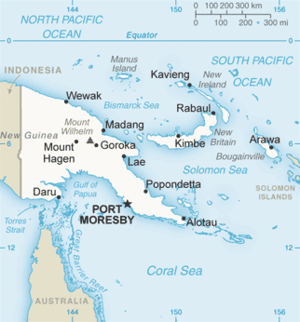 The Solomon Sea is a sea located within the Pacific Ocean. It lies between Papua New Guinea and the Solomon Islands. Many major battles were fought there during World War II.

The International Hydrographic Organization defines the limits of the Solomon Sea as follows:[1]

On the Northwest. By the Southeast limit of Bismarck Sea [A line from the Southern point of New Ireland along the parallel of 4°50' South to the coast of New Britain, along its Northern coast and thence a line from its Western extreme through the Northern point of Umboi Island to Teliata Point, New Guinea (Lua error in Module:Coordinates at line 668: callParserFunction: function "#coordinates" was not found.)].

On the Southwest. By the coast of New Guinea and a line from its Southeasternmost point through the Louisiade Archipelago to Rossel Island.

The Solomon Sea includes the New Britain Trench, and reaches its maximum depth at 29,988 feet (9,140 m) below sea level in the Planet Deep.[2]