The Sonya class are a group of minesweepers built for the Soviet Navy and Soviet allies between 1971 and 1991. The Soviet designation is Project 1265 Yakhont.

A wooden hulled coastal minehunter, built as a successor to the Vanya class with new sweeps and more effective sonar. A central safe explosion proof area is fitted and all key systems can be remote controlled from there. 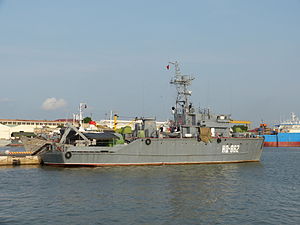 A total of 72 ships were built by Uliis yard in the Vladivostok and Avangard yards in Petrozavodsk between 1971 and 1991. One ship, the BT-730, was lost in an accident in 1985. Another unit collided with a Swedish surveillance ship (HMS Orion) east of Gotland in the Baltic in November 1985.[1]