The Sopwith 1½ Strutter was a British one or two-seat biplane multi-role aircraft of the First World War.[1] It is significant as the first British-designed two seater tractor fighter, and the first British aircraft to enter service with a synchronised machine gun. It was given the name "1½ Strutter" because of the "one-and-a-half" (long and short) pairs of cabane struts supporting the top wing.

As well as serving with both British air services, it also saw widespread but rather undistinguished service with the French Aéronautique Militaire.

In December 1914, the Sopwith Aviation Company designed a small, two seat biplane powered by an 80 hp (60 kW) Gnome rotary engine, which became known as the "Sigrist Bus" after Fred Sigrist, Sopwith's Works Manager. The Sigrist Bus first flew on 5 June 1915, and although it set a new British altitude record on the day of its first flight, only one was built, serving as a company runabout.[2][3]

The Sigrist Bus formed the basis for a new, larger fighter aircraft, the Sopwith LCT (Land Clerget Tractor), designed by Herbert Smith, powered by a 110 hp (82 kW) Clerget engine. Like the Sigrist Bus, each of the upper wings (there was no true centre section) was connected to the fuselage by a pair of short (half) struts and a pair of longer struts, forming a "W" when viewed from the front, this giving rise to the aircraft's popular nickname of the 1½ Strutter.[1] The first prototype was ready in mid-December 1915,[3][4] undergoing official testing in January 1916.

The 1½ Strutter was of conventional, wire braced, wood and fabric construction. The pilot and gunner sat in widely separated tandem cockpits, with the pilot sitting in front, giving the gunner a good field of fire for his Lewis gun. The aircraft had a variable incidence tailplane that could be adjusted by the pilot in flight, and airbrakes under the lower wings to reduce landing distance.[2][5] 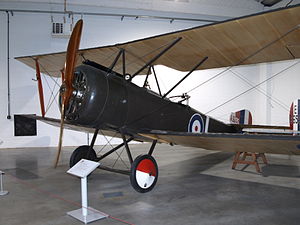 A preserved Sopwith 1½ Strutter at the RAF Museum, London, showing the W-form pairs of "1½" struts that gave the aeroplane its name, and the centrally-mounted Vickers machine gun

The Vickers-Challenger synchronisation gear was put into production for the Royal Flying Corps in December 1915,[6] and in a few weeks, a similar order for the Scarff-Dibovski gear was placed for the RNAS.[7] Early production 1½ Strutters were fitted with one or the other of these gears for the pilot's fixed .303-in Vickers machine gun; due to a shortage of the new gears some early aircraft were built with only the observer's gun. Later aircraft were either fitted with the Ross or the Sopwith-Kauper gears.[8] None of these early mechanical synchronisation gears were very reliable and it was not uncommon for propellers to be damaged, or even entirely shot away.

The Scarff ring mounting was also new and production was at first slower than that of the aircraft requiring them. Various makeshift Lewis mountings as well as the older Nieuport ring mounting, were fitted to some early 1½ Strutters as an interim measure.[9] The two-seaters could carry four 25 lb (11 kg) bombs underwing, which could be replaced by two 65 lb (30 kg) bombs for anti-submarine patrols.[10]

From the beginning a dedicated light bomber version was planned, with the observer's cockpit eliminated to allow for more fuel and bombs to be carried in the manner of the Martinsyde Elephant and the B.E.12, with an internal bomb bay capable of carrying four 65 lb (30 kg) bombs.[10][11]

The prototype two-seater flew in December 1915[4] and production deliveries started to reach the RNAS in February 1916. By the end of April, No. 5 Wing RNAS had a complete flight equipped with the new aircraft. The Sopwiths were used both for escorting the Wing's Caudron G.4 and Breguet bombers and for carrying out bombing raids themselves.[12][13] The War Office had ordered the type for the RFC in March but because Sopwith's entire production capacity was pre-contracted to the navy, the RFC orders had to be placed with Ruston Proctor and Vickers[14] and production from these manufacturers did not get into its stride until August. Since the Somme offensive was planned for the end of June and with the RFC having a shortage of up-to-date aircraft to support the planned offensive, it was agreed that a number of Sopwiths would be transferred from one service to the other, allowing No. 70 Squadron to reach the front by early July 1916, with Sopwith-built Strutters originally intended for the Navy.[15] 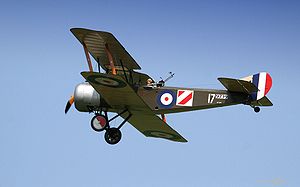 At first No. 70 did very well with their new mounts. The period of German ascendency known as the Fokker scourge was over, and the 1½ Strutter's long range, coupled with its excellent armament for the period, enabled effective offensive patrolling deep into German held territory.[16] However, by the time No. 45 Squadron reached the front in October the new Albatros fighters were appearing in the Jagdstaffeln. By January 1917, when No 43 Squadron arrived in France, the type was outclassed as a fighter. While the fitting of a more powerful 130 hp Le Clerget 9B improved performance slightly, this came too late to reverse the situation.[17] It was still a useful long-range reconnaissance aircraft when it could be provided with adequate fighter escort,[18] but was one of the types to suffer severely during "Bloody April" - No. 43 squadron alone suffering 35 casualties, from an officer establishment of 32.[19]

Like other early Sopwith types, the 1½ Strutter was very lightly built and its structure did not stand up very well to arduous war service. It was also far too stable to make a good dogfighter, and the distance between the pilot and the observer's cockpits impeded cooperation between them. The last front line 1½ Strutters in the RFC were replaced by Camels in late October 1917.[18]

This was by no means the end of the Sopwith two seater's service. The type's long range and stability were good qualities for a home defence fighter and it served with three home defence squadrons, No. 37, No. 44 and No. 78 Squadrons. Most of the 1½ Strutters supplied to home defence units had been built as two-seaters but many were converted "in the field" to single seaters in order to improve performance. Some of these single-seaters were similar to the bomber variant but others were of different type, known (like similarly adapted Sopwith Camels) as the Sopwith Comic. The cockpit was moved back behind the wings and one or two Lewis guns, either mounted on Foster mountings or fixed to fire upwards, outside the arc of the propeller, replaced the synchronised Vickers.

The RNAS used most of their 1½ Strutters as bombers (in the Aegean and Macedonia as well as in France) and as shipboard aircraft. In this service it was known as the Ship's Strutter and flew from aircraft carriers and other warships of the Royal Navy, as well as from HMAS Australia.

The RNAS and the RFC (and after April 1918 the RAF) used the type as a trainer after its combat operational days were over. Like the Pup, it proved a popular personal aircraft for senior officers.

In French and foreign service 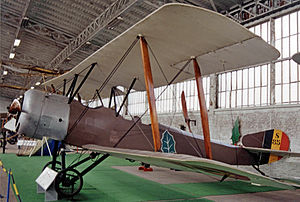 The largest user of the Sopwith was the French Aéronautique Militaire. By May 1916 it was obvious that the pusher Farman and Breguet bombers of the time had become obsolete and pending the appearance of French tractor aircraft, the Sopwith was ordered in very large numbers from French manufacturers - in three versions, the SOP. 1A2 (two seater reconnaissance), SOP. 1B2 (two-seater bomber) and SOP. 1B1 (single-seater bomber).[20][21] For want of a better alternative, the French Sopwiths had to soldier on long after they had become obsolete and were not fully replaced by later types until early 1918. Three Belgian squadrons also flew French-built Sopwiths, and surplus French Sopwiths were used by several countries postwar.

During the war, several 1½ Strutters that were interned after landing in the Netherlands were purchased for the Dutch Luchvaart Afdeeling.

Over 100 1½ Strutters were also built in Russia by Duks and Lebedev,[22] supplemented by large numbers delivered directly from Britain and France. The 1½ Strutter remained in large scale use by both the Soviet forces and White Russians during the Russian civil war and Polish-Soviet war.[23] Three were captured during this war and used by the Poles in 1919–1920.[24] Other captured ones were used by Baltic states.

The American Expeditionary Force purchased 384 two-seat Strutter observation aircraft and 130 single seat bombers from France in 1917-18.[25] While mainly used for training, they were used operationally by the 90th Aero Squadron as an interim measure, due to a shortage of later types.[21] The U.S.Navy used a number of the two seat Sopwiths as ships' aircraft in the early post-war years.

The 1½ Strutter also served in the Imperial Japanese Army Air Force - some examples serving in the Japanese expeditionary force in Siberia during 1918.

Around 1,500 1½ Strutters were built for the Royal Flying Corps and the Royal Naval Air Service and between 4,200 and 4,500 were built in France. 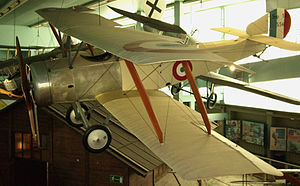 Sopwith No. 556 on display in the Musée de l'Air et de l'Espace at Paris le Bourget

Original Sopwith 1½ Strutter aircraft are preserved at the following locations.[27]

A number of reproductions of this popular machine now exist. Visitors to the Scottish National Museum of Flight in April/May 2013 can see a Sopwith 1½ Strutter being built in the Concorde hangar. This machine differs from originals in being powered by a radial engine instead of a rotary.

Possibly one aircraft from Switzerland in 1926.[22] 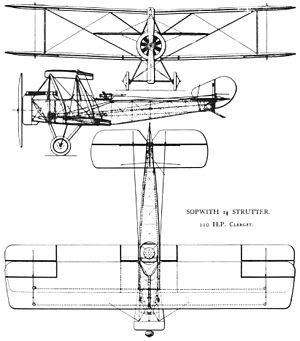