From Infogalactic: the planetary knowledge core
Jump to: navigation, search
This article is about the fighter aircraft. For the 1960s psychedelic rock band, see Sopwith Camel (band).

The Sopwith Camel was a British First World War single-seat biplane fighter introduced on the Western Front in 1917. Manufactured by the Sopwith Aviation Company, it had a heavy, powerful rotary engine, and concentrated fire from twin synchronized machine guns. Though difficult to handle, to an experienced pilot it provided very good manoeuvrability. An excellent fighter, the Camel was credited with shooting down 1,294 enemy aircraft, more than any other Allied fighter of the conflict. It also served as a ground-attack aircraft, especially towards the end of the war, by which point it was outclassed in the air-to-air role. 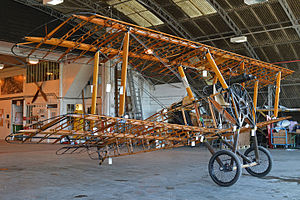 The Camel's predecessor, the Sopwith Pup, was no longer competitive against newer German fighters, such as the Albatros D.III, and thus the Camel was developed specifically to replace the Pup,[2] as well as the Nieuport 17s that had been purchased from the French as an interim measure. It was recognised that the new fighter would need to be faster and have a heavier armament. To meet this demand, the chief designer of the Camel, Herbert Smith, opted to develop a biplane, designated the Sopwith F.1.[3]

The "Big Pup", as it was known early in its development, and powered by a 110 hp Clerget 9Z was first flown by Harry Hawker at Brooklands on 22 December 1916. Its design was conventional for its time, featuring a wooden box-like fuselage structure, an aluminium engine cowling, plywood panels around the cockpit, and fabric-covered fuselage, wings and tail. While having some clear similarities with the Pup, it had a noticeably bulkier fuselage.[3] For the first time on an operational British-designed fighter, two 0.303 in (7.7 mm) Vickers machine guns were mounted directly in front of the cockpit, synchronised to fire forwards through the propeller disc. A metal fairing over the gun breeches, intended to protect the guns from freezing at altitude, created a "hump", and it was this feature that led pilots to refer to the aircraft by the name Camel. This was never an official designation for the aircraft however.[2][4] 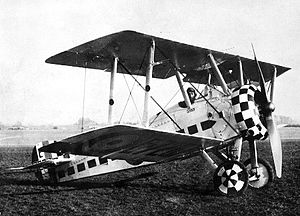 Harry Cobby sitting in the cockpit of a Sopwith Camel

The bottom wing was rigged with 3° dihedral but the top wing had no dihedral, so that the gap between the wings was less at the tips than at the roots; this change was made at the suggestion of Fred Sigrist, the Sopwith works manager, in order to simplify construction. The upper wing features a distinctive central cutout section to improve upwards visibility for the pilot.[5] Early productions Camels were powered by a single rotary engine, most commonly either the Clerget 9B or the Bentley BR1.[6] To avoid a production bottleneck being imposed on the aircraft by a potential engine shortage, other engines were also used.[7]

In May 1917, the first production contract for an initial batch of 250 Camels was issued by the War Office.[8] During 1917, 1,325 Camels were manufactured, almost entirely of the initial F.1 variant and by the time production came to an end, approximately 5,490 Camels of all types had been built.[9] In early 1918, production of the navalised "Ship's" Camel 2F.1 began.[10]

Unlike the preceding Pup and Triplane, the Camel was considered to be difficult to fly.[11] The type owed both its extreme manoeuvrability and its difficult handling to the close placement of the engine, pilot, guns and fuel tank (some 90% of the aircraft's weight) within the front seven feet of the aircraft, and to the strong gyroscopic effect of the rotary engine, although other types with similar configurations did not suffer the same problem. The Camel soon gained an unfortunate reputation with pilots. Many crashed on take-off when the load of fuel usually carried pushed the centre of gravity beyond the rearmost safe limits. In level flight, the Camel was markedly tail-heavy. Unlike the Sopwith Triplane, the Camel lacked a variable incidence tailplane, so that the pilot had to apply constant forward pressure on the control stick to maintain a level attitude at low altitude. The aircraft could be rigged so that at higher altitudes it could be flown "hands off." A stall immediately resulted in a dangerous spin. A two-seat trainer version of the Camel was later built to ease the transition process.[12] 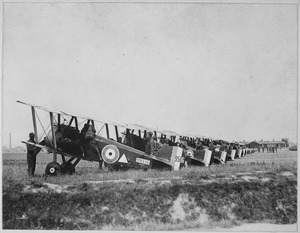 Camels being prepared for a sortie.

In June 1917, the type entered service with No. 4 Squadron of the Royal Naval Air Service, near Dunkirk. Its first combat flight and reportedly its first victory claim were both made on 4 July 1917.[8] By the end of July 1917, the Camel also equipped No. 3 and No. 9 Naval Squadrons; and it had became operational with No. 70 Squadron of the Royal Flying Corps.[10] By February 1918, 13 squadrons had Camels as their primary equipment.[citation needed]

The Camel proved to have better manoeuvrability than the Albatros D.III and D.V and offered heavier armament and better performance than the Pup and Triplane. Its controls were light and sensitive. The Camel turned more slowly to the left, which resulted in a nose-up attitude due to the torque of the rotary engine. But the engine torque also resulted in the ability to turn to the right quicker than other fighters,[13] although that resulted in a tendency towards a nose-down attitude from the turn. Because of the faster turning capability to the right, to change heading 90° to the left, some pilots preferred to do it by turning 270° to the right.[citation needed]

Agility in combat made the Camel one of the best-remembered Allied aircraft of the First World War. RFC crew used to joke that it offered the choice between "a wooden cross, the Red Cross, or a Victoria Cross"[14] Together with the S.E.5a and the SPAD S.XIII, the Camel helped to re-establish the Allied aerial superiority that lasted well into 1918.[citation needed]

Major William Barker's Sopwith Camel (serial no. B6313, the aircraft in which he scored the majority of his victories),[15] was used to shoot down 46 aircraft and balloons from September 1917 to September 1918 in 404 operational flying hours, more than any other single RAF fighter.

An important role for the Camel was home defence. The RNAS flew Camels from Eastchurch and Manston airfields against daylight raids by German bombers, including Gothas, from July 1917.[12] The public outcry against the night raids and the poor response of London's defences forced the RFC to divert Camels from France to home defence, with 44 Squadron RFC reforming on the Camel in the home defence role in July 1917.[16] When the Germans switched to night attacks, the Camel proved capable of being flown at night, and the home defence aircraft were modified with navigation lights to serve as night fighters. A number of Camels were more extensively modified with the Vickers machine guns being replaced by overwing Lewis guns, with the cockpit being moved rearwards so the pilot could reload the guns. This modification, which became known as the "Sopwith Comic" allowed the guns to be fired without affecting the pilot's night vision, and allowed the use of new, more effective incendiary ammunition that was considered unsafe to fire from synchronised Vickers guns.[17][18][Note 1] By March 1918, the home defence squadrons were equipped with the Camel, with seven home defence squadrons flying Camels by August 1918.[20] 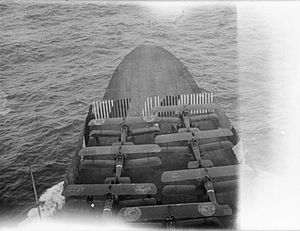 The RNAS operated 2F.1 Camels from platforms mounted on the turrets of major warships, from some of the earliest aircraft carriers, and from aircraft lighters which were specially modified barges, which were towed fast enough that a Camel could be launched from one against incoming air raids from a more advantageous position that shore bases allowed. 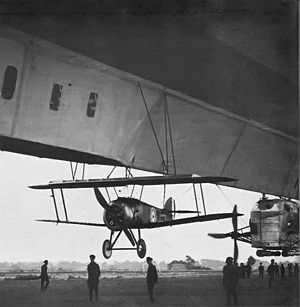 Sopwith 2F.1 Camel suspended from airship R 23 prior to a test flight.

By mid-1918, the Camel had become obsolescent as a day fighter as its climb rate, level speed and performance at altitudes over 12,000 ft (3,650 m) were outclassed by the latest German fighters, such as the Fokker D.VII. However, it remained useful as a ground-attack and infantry support aircraft. During the German offensive of March 1918, squadrons of Camels harassed the advancing German Army, inflicting high losses (although suffering high losses in turn) through the dropping of 25 lb (11 kg) Cooper bombs and low-level strafing. The protracted development of the Camel's replacement, the Sopwith Snipe, meant that the Camel remained in service until after the Armistice.[citation needed] 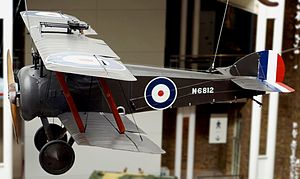 The Sopwith 2F.1 Camel used to shoot down Zeppelin L 53, at the Imperial War Museum, London. Note mounting of twin Lewis guns over the top wing

Twin Vickers guns replaced by two Lewis guns on Foster mountings firing forward over the top wing, as the muzzle flash of the Vickers guns could blind the pilot. To allow reloading of the guns, the pilot was moved about 12 inches (30 cm) to the rear and to compensate the fuel tank was moved forward.[23] Served with Home Defence Squadrons against German air raids. The "Comic" nickname was unofficial, and was shared with the night fighter version of the Sopwith 1½ Strutter. 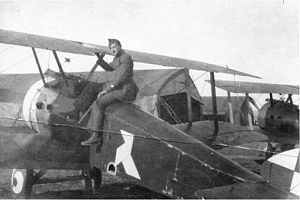 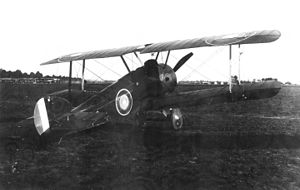 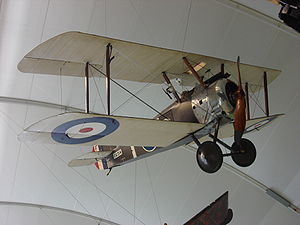 There are only eight known original Sopwith Camels left:[29] 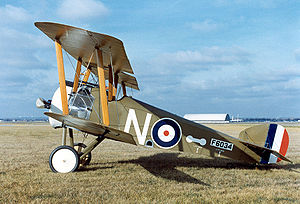 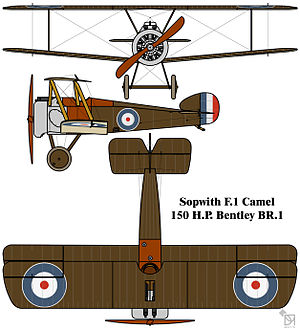 The Camel appears in literature and popular media as: