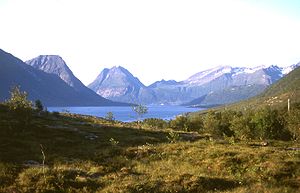 The Aldersund in Helgeland, Norway separates the island of Aldra (left side) from the continent

In geography, a sound is a large sea or ocean inlet larger than a bay, deeper than a bight, and wider than a fjord; or a narrow sea or ocean channel between two bodies of land (see also strait).[1][2]

There is little consistency in the use of 'sound' in English-language place names. 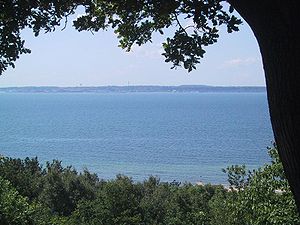 View over the Øresund (English: The Sound), from Helsingborg, Sweden

A sound is often formed by the sea flooding a river valley. This produces a long inlet where the sloping valley hillsides descend to sea-level and continue beneath the water to form a sloping sea floor. The Marlborough Sounds in New Zealand are a good example of this type of formation.

Sometimes a sound is produced by a glacier carving out a valley on the coast then receding, or the sea invading a glacier valley. The glacier produces a sound that often has steep, near vertical, sides that extend deep under water. The sea floor is often flat and deeper at the landward end than the seaward end, due to glacial moraine deposits. This type of sound is more properly termed a fjord (or fiord). The sounds in Fiordland, New Zealand, have been formed this way.

In the more general northern European usage, a sound is a strait or the most narrow part of a strait. In Scandinavia and around the Baltic Sea, there are more than a hundred straits named Sund, mostly named for the island they separate from the continent or a larger island.

The Sound is the internationally recognized,[3] short name for the Øresund, the narrow stretch of water that separates Sweden and Denmark and is the main waterway between the North Sea and the Baltic Sea. It is also a colloquial short name, among others, for Plymouth Sound, England.

In areas explored by the British in the late 18th Century, particularly the northwest coast of North America, the term 'sound' was applied to inlets containing large islands, such as Puget Sound and Howe Sound. It was also applied to bodies of open water still not fully open to the ocean, such as Queen Charlotte Sound and Caamaño Sound, or broadenings or mergings at the openings of inlets, like Fitz Hugh Sound and Cross Sound.

In the United States, Long Island Sound separates Long Island from the coast of Connecticut, but on the Atlantic Ocean side of Long Island, the body of water between Long Island and its barrier beaches is termed the Great South Bay. Pamlico Sound is a similar lagoon that lies between North Carolina and its barrier beaches, the Outer Banks, in a similar situation. The Mississippi Sound separates the Gulf of Mexico from the mainland, along much of the gulf coasts of Mississippi and Alabama. On the West Coast, Puget Sound, by contrast, is a deep arm of the ocean.

The term sound is derived from Anglo-Saxon or Old Norse sund, which also means "swimming".[2]

The word sund is already documented in Old Norse and Old English in the meaning of "gap" (or "narrow access"). This suggests a relation to verbs meaning "to separate" such as sondre (Norwegian), söndra (Swedish), German absondern and aussondern, as well as the English noun sin, Swedish synd, German Sünde ("apart from God's law"). Swedish has also the adjective sönder = "broken", and English has the adjective "asunder" and the noun "sundry".

Puget Sound, as seen from the Space Needle

Much further south, there are many sounds in the southwestern tip of South Island. From North to South they are: 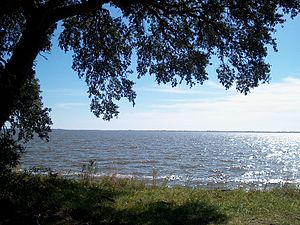 Media related to Script error: No such module "Commons link". at Wikimedia Commons