South African Infantry originated as the Infantry Branch of the Union Defence Forces in 1913.

The Infantry Branch was enlarged in 1934, and the mounted rifles regiments were converted to infantry in 1935.

In 1943, the Infantry Branch was incorporated into the new South African Armoured Corps, which was divided into armour and infantry branches after World War II.

Based on the findings of a committee led by Brigader H.B. Klopper in late 1953, it was recommended that some English-speaking units be converted to Afrikaans medium units, while other regiments should be amalgamated or contracted.[2]:16

Despite representations made by some of the units affected, the reorganization went ahead from January 1954. In 1956 a further reorganization was made necessary by the considerable increase in the number of citizens balloted for training in some areas. The Army was accordingly reorganized to consist of 32 Afrikaan-speaking units (including five infantry regiments, 5 tank units and 4 armoured car units) and 20 English medium units (including ten infantry regiments, 4 tank units and 1 armoured car unit). The changes were implemented with effect from 22 September 1956.

Plans were in place to establish volunteer black infantry units along ethnic lines, comparable to the Cape Corps.

Many of their members were Service Volunteers, members of all the population groups who were not compelled to do National Service (hence excluding white males). Eventually the various black battalions amounted to about 16,000, and some of the members of these battalions became Auxiliary or Permanent Force members.

In the post apartheid era, no ethnic or language based infantry exist at all. By 1997, several units were reorganised:

In the 1980s Regiment Port Natal appears to have been a component of 84 Motorised Brigade (South Africa). It was amalgamated with Durban Light Infantry about 1999.[6]

From Corps to Formation

In 2000 the Corps became known as the South African Army Infantry Formation.[3] The first woman battalion commander appears to have been appointed in 2001.[7] The specialised horse/motorcycle/dog-using battalion, 12 South African Infantry Battalion, was disbanded in April 2005.[8] The previous General Officer Commanding up to 2012 was Lieutenant General Themba Nkabinde.[9] 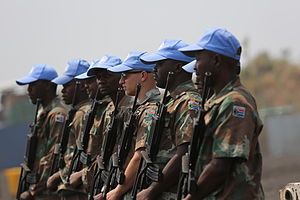 Part of the South African contingent of MONUSCO

Since 1994, South Africa's Infantry units have supported numerous operations for the United Nations and the African Union across the continent, including in the Democratic Republic of the Congo (MONUC/MONUSCO), Burundi (South African Protection Support Detachment, and African Union Mission in Burundi), in the Comores, and with AMIS/UNMIS in the Sudan. 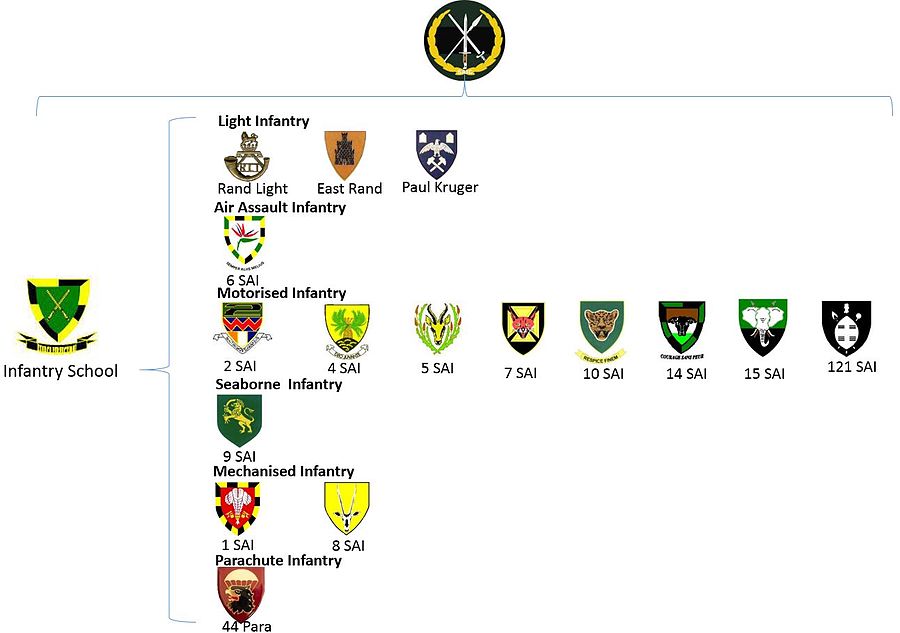 The infantry corps contains a total of 15 regular battalions in a variety of different roles:[10]

The infantry corps contains a total of 26 reserve battalions in the following roles:

Within the South African Army, there are six main types of infantry: 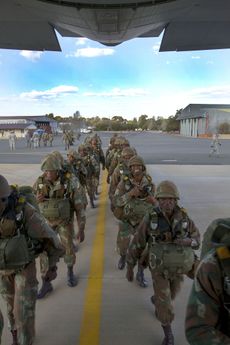 Air Assault infantry are trained to be deployed using helicopters, parachute or aircraft. 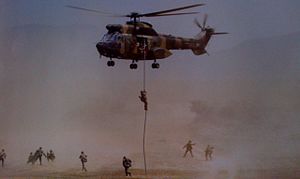 Mechanised infantry are equipped with the Ratel armoured personnel carrier, a wheeled vehicle that can deploy over all terrain. 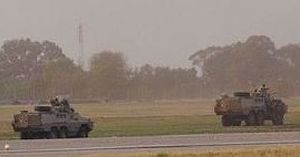 Motorised infantry are equipped with various Samil trucks, that can be deployed over rough terrain, but is primarily a road vehicle. Since the mid-2000s, they have been using vehicles like Mamba.

The organisation of South African motorised, mechanised, air assault and parachute infantry battalions are broadly similar, the mechanised battalion however lacks a machine gun platoon in the support company and the internal security battalion lacks the same as well as other support weapons (mortars, antitank weapons and assault pioneers).

A battalion has at its disposal the following weapons:

The number of vehicles is dependent on the type of unit and role. A parachute or air assault battalion deployed by air will largely be dependent on the 104 LMT Gecko airborne amphibious 8x8 light rapid deployment logistic vehicles assigned to 44 Parachute Regiment. The number deployed will depend on the airlift available.

By some accounts a Fighting Echelon (F-Echelon) would include 88 A-Vehicles, but the numbers can be higher. In September 2008 the motorised 5 SAI Bn deployed 113 Casspir armoured personnel and weapon carriers to a force preparation exercise (Seboka) and the mechanised 8 SAI Bn deployed 107 Ratels. The A- and B-Echelons, fully mobilised, can muster up at least another 90 B-Vehicles of various types. For Seboka 5 SAI deployed an under-strength combined echelon of 41 logistics trucks, pantries, diesel and water bunkers, mobile showers and recovery vehicles. 8 SAI’s echelon’s mustered 38 vehicles. 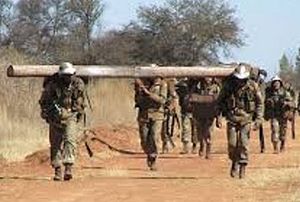 All basic infantry training is done at 3 South African Infantry Battalion Training Depot at Kimberley. This is a Regular Force unit. Second phase deals with specific equipment, weapons and tactics, general and specific to the type of Infantry and is dealt with at the unit and its training areas.

Third phase ramps up to a conventional warfare exercise usually held at Lohatla Army Battle School. Tactics such as fire and movement, as well as the amalgamation with other type formations is done here, with expanding scope from squad to section to platoon to company, battalion and brigade exercises. 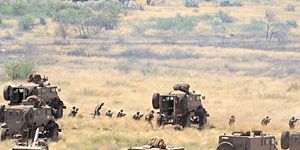 More specialized training is done on an ad-hoc basis. 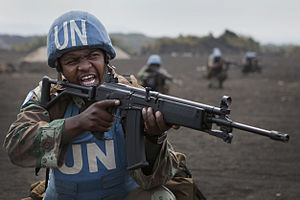 South African Infantry are trained in an assortment of equipment in addition to their personal rifles, such as:

While South Africa was part of the British Commonwealth, many units formed alliances with British and other units. With the advent of the Republic in 1961, almost all of these alliances fell away either as a natural consequence of changing alliances or on instructions from the authorities. Some units have maintained the alliances unofficially.

With the change of government in 1994, South Africa once again became officially part of the Commonwealth, so alliances are once again possible.

Some examples of alliances:

Many South African units have a proud history. This is particularly reflected in the many Battle Honours they have received. 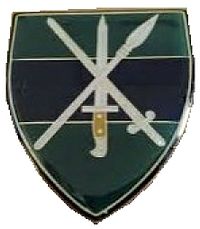