The anomaly at an altitude of approximately 560 kilometers[1]

The South Atlantic Anomaly (SAA) is an area where the Earth's inner Van Allen radiation belt comes closest to the Earth's surface dipping down to an altitude of 200 km (124 mi). This leads to an increased flux of energetic particles in this region and exposes orbiting satellites to higher-than-usual levels of radiation. The effect is caused by the non-concentricity of the Earth and its magnetic dipole, and the SAA is the near-Earth region where the Earth's magnetic field is weakest relative to an idealized Earth-centered dipole field. 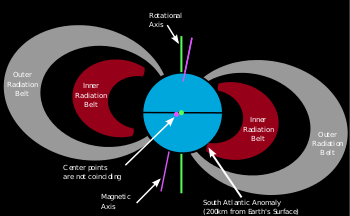 A cross-sectional view of the Van Allen radiation belts, noting the point where the South Atlantic Anomaly occurs

One reason for the variation is that if we represent the Earth's magnetism by a bar magnet of small size but strong intensity ("magnetic dipole"), the best description is obtained by placing that magnet not at the center of Earth but some distance away from it, more or less in the direction of Singapore. As a result, over South America and the south Atlantic, near Singapore's antipodal point, the magnetic field is relatively weak, resulting in a lower repulsion to trapped particles of the radiation belts here, and as a result these particles reach deeper into the upper atmosphere than they otherwise would.[3]

The shape of the SAA changes over time. Since its initial discovery in 1958,[4] the southern limits of the SAA have remained roughly constant while a long-term expansion has been measured to the northwest, the north, the northeast, and the east. Additionally, the shape and particle density of the SAA varies on a diurnal basis, with greatest particle density corresponding roughly to local noon. At an altitude of approximately 500 km (300 mi), the SAA spans from −50° to 0° geographic latitude and from −90° to +40° longitude.[5] The highest intensity portion of the SAA drifts to the west at a speed of about 0.3 degrees per year, and is noticeable in the references listed below. The drift rate of the SAA is very close to the rotation differential between the Earth's core and its surface, estimated to be between 0.3 and 0.5 degrees per year.

The South Atlantic Anomaly is of great significance to astronomical satellites and other spacecraft that orbit the Earth at several hundred kilometers altitude; these orbits take satellites through the anomaly periodically, exposing them to several minutes of strong radiation, caused by the trapped protons in the inner Van Allen belt. The International Space Station, orbiting with an inclination of 51.6°, requires extra shielding to deal with this problem. The Hubble Space Telescope does not take observations while passing through the SAA.[6] Astronauts are also affected by this region which is said to be the cause of peculiar 'shooting stars' (phosphenes) seen in the visual field of astronauts.[7] Passing through the South Atlantic Anomaly is thought[8] to be the reason for the early failures of the Globalstar network's satellites.

The PAMELA experiment, while passing through the SAA, detected antiproton levels that were orders of magnitude higher than expected. This suggests the Van Allen belt confines antiparticles produced by the interaction of the Earth's upper atmosphere with cosmic rays.[9]