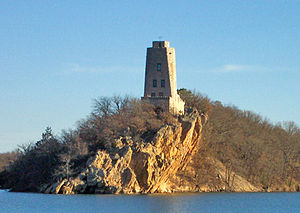 South Central Oklahoma, or Arbuckle Country, as officially defined [1] by the Oklahoma Department of Tourism, is an amorphous 10-county region in the state of Oklahoma. It is centered on the Arbuckle Mountains, an ancient, eroded range traversing some 70 miles (110 km) across the region, and surrounded by rivers and lakes, notably Lake Texoma, Lake Murray and Lake of the Arbuckles.

The region, also known by its former Okla. Department of Tourism designation, Lake and Trail Country, has three distinct centers of commerce and culture, Ardmore, Ada, and Durant, though it retains a largely rural nature, and is populated with many small towns and ranches. It also contains a large portion of the cross timbers region, transitioning from a heavily wooded area (with native oaks, elms and other eastern varieties) to a rolling savanna in the west, occasionally broken by cedar and mesquite trees. In addition to abundant water resources latent in the Arbuckle-Simpson Aquifer, the region has some of the highest oil & gas production in the state, with Carter County seated as the largest producer in the state.[2] 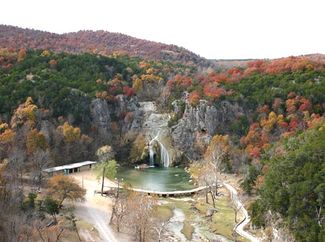 The Arbuckle Mountains are the defining geographical entity in this region, with peaks (once taller than the Rockies) eroded down to their current elevation of 200-300' above the surrounding terrain. Many lakes are also located throughout the region, often shaped by the irregular topography of the underlying Arbuckle range. Larger manmade lakes include Lake Texoma, with over 89,000 acres (360 km2), and Lake Murray, a 5,700-acre (23 km2) lake impounded about 10 miles (20 km) south of Ardmore.

Fishing, boating and swimming are popular throughout the region, especially on Lake Texoma, the second most popular lake in terms of annual visitors in the United States, as determined by the U.S. Corps of Engineers. Other draws in the region include Oklahoma's tallest waterfall, Turner Falls, as well as the restored historic downtowns of Ardmore, Durant and Ada. The region's proximity to the Dallas/Fort Worth Metroplex makes it a popular weekend destination for those searching for a respite from the increasingly congested North Texas region.

The growth of the southern portion of the region rivals that of both the Oklahoma City and the Tulsa metropolitan regions, with Bryan and Marshall counties (areas surrounding Lake Texoma) adding greater numbers of residents due to the explosive northward growth in the Dallas/Fort Worth Metroplex.