The South China Sea is a marginal sea that is part of the Pacific Ocean, encompassing an area from the Singapore and Malacca Straits to the Strait of Taiwan of around 3,500,000 square kilometres (1,400,000 sq mi). The area's importance largely results from one-third of the world's shipping sailing through its waters and that it is believed to hold huge oil and gas reserves beneath its seabed.[2]

The minute South China Sea Islands, collectively an archipelago, number in the hundreds. The sea and its mostly uninhabited islands are subject to competing claims of sovereignty by several countries. These claims are also reflected in the variety of names used for the islands and the sea.

South China Sea is the dominant term used in English for the sea, and the name in most European languages is equivalent, but it is sometimes called by different names in China's neighboring countries, often reflecting historical claims to hegemony over the sea.

The English name is a result of early European interest in the sea as a route from Europe and South Asia to the trading opportunities of China. In the sixteenth century Portuguese sailors called it the China Sea (Mar da China); later needs to differentiate it from nearby bodies of water led to calling it the South China Sea.[4] The International Hydrographic Organization refers to the sea as "South China Sea (Nan Hai)".[3]

The Yizhoushu, which was a chronicle of the Western Zhou dynasty (1046–771 BCE) gives the first Chinese name for the South China Sea as Nanfang Hai (Chinese: 南方海; pinyin: Nánfāng Hǎi; literally: "Southern Sea"), claiming that barbarians from that sea gave tributes of hawksbill sea turtles to the Zhou rulers.[5] The Classic of Poetry, Zuo Zhuan, and Guoyu classics of the Spring and Autumn period (771–476 BCE) also referred to the sea, but by the name Nan Hai (Chinese: 南海; pinyin: Nán Hǎi; literally: "South Sea") in reference to the State of Chu's expeditions there.[5] Nan Hai, the South Sea, was one of the Four Seas of Chinese literature. There are three other seas, one for each of the four cardinal directions.[6] During the Eastern Han dynasty (23–220 CE), China's rulers called the Sea Zhang Hai (Chinese: 漲海; pinyin: Zhǎng Hǎi; literally: "distended sea").[5] Fei Hai (Chinese: 沸海; pinyin: Fèi Hǎi; literally: "boil sea") became popular during the Southern and Northern Dynasties period. Usage of the current Chinese name, Nan Hai (South Sea), became gradually widespread during the Qing Dynasty.[7]

In Southeast Asia it was once called the Champa Sea or Sea of Cham, after the maritime kingdom of Champa that flourished there before the sixteenth century. The majority of the sea came under Japanese naval control during World War II following the military acquisition of many surrounding South East Asian territories in 1941. Japan calls the sea Minami Shina Kai "South China Sea". This was written 南支那海 until 2004, when the Japanese Foreign Ministry and other departments switched the spelling 南シナ海, which has become the standard usage in Japan.

In September 2012, Philippine President Benigno Aquino III signed Administrative Order No. 29, mandating that all government agencies use the name "West Philippine Sea" to refer to the parts of the South China Sea within the Philippines' exclusive economic zone, and tasked the National Mapping and Resource Information Authority (NAMRIA) to use the name in official maps.[13]

States and territories with borders on the sea (clockwise from north) include: the People's Republic of China (including Macau and Hong Kong), the Republic of China (Taiwan), the Philippines, Malaysia, Brunei, Indonesia, Singapore, and Vietnam.

The International Hydrographic Organization defines the limits of the South China Sea as follows:[3]

On the North. From Fuki Kaku the North point of Formosa to Kiushan Tao (Turnabout Island) on to the South point of Haitan Tao (25°25'N) and thence Westward on the parallel of 25°24' North to the coast of Fukien.

On the West. The Mainland, the Southern limit of the Gulf of Thailand and the East coast of the Malay Peninsula. 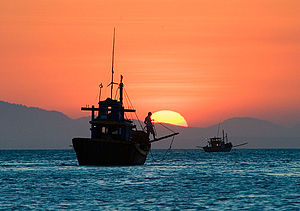 The sea lies above a drowned continental shelf; during recent ice ages global sea level was hundreds of metres lower, and Borneo was part of the Asian mainland.

The South China Sea opened after around 45 million years ago when Dangerous Ground were rifted away from southern China. Extension culminated in seafloor spreading around 30 million years ago, a process that propagated to the SW resulting in the V-shaped basin we see today. Extension ceased around 17 million years ago.[14] Arguments have continued about the role of tectonic extrusion in forming the basin. Paul Tapponnier and colleagues have argued that as India collides with Asia it pushes Indochina to the SE. The relative shear between Indochina and China caused the South China Sea to open.[15] This view is disputed by geologists[who?] who do not consider Indochina to have moved far relative to mainland Asia. Marine geophysical studies in the Gulf of Tonkin by Peter Clift has shown that the Red River Fault was active and causing basin formation at least by 37 million years ago in the NW South China Sea, consistent with extrusion playing a part in the formation of the sea. Since opening the South China Sea has been the repository of large sediment volumes delivered by the Mekong River, Red River and Pearl River. Several of these deltas are rich in oil and gas deposits.

The South China Sea contains over 250 small islands, atolls, cays, shoals, reefs, and sandbars, most of which have no indigenous people, many of which are naturally under water at high tide, and some of which are permanently submerged. The features are grouped into three archipelagos (listed by area size), Macclesfield Bank and Scarborough Shoal: 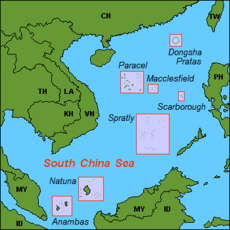 The Spratly Islands spread over an 810 by 900 km area covering some 175 identified insular features, the largest being Taiping Island (Itu Aba) at just over 1.3 km long and with its highest elevation at 3.8 metres.

The largest singular feature in the area of the Spratly Islands is a 100 km wide seamount called Reed Tablemount, also known as Reed Bank, in the northeast of the group, separated from Palawan Island of the Philippines by the Palawan Trench. Now completely submerged, with a depth of 20 m, it was an island until it sank about 7,000 years ago due to the increasing sea level after the last ice age. With an area of 8,866 km², it is one of the largest submerged atoll structures of the world.

The South China Sea is an extremely significant body of water in a geopolitical sense. It is the second most used sea lane in the world, while in terms of world annual merchant fleet tonnage, over 50% passes through the Strait of Malacca, the Sunda Strait, and the Lombok Strait. Over 1.6 million m³ (10 million barrels) of crude oil a day are shipped through the Strait of Malacca, where there are regular reports of piracy, but much less frequently than before the mid-20th century.

The region has proven oil reserves of around 1.2 km³ (7.7 billion barrels), with an estimate of 4.5 km³ (28 billion barrels) in total. Natural gas reserves are estimated to total around 7,500 km³ (266 trillion cubic feet). A 2013 report by the U.S. Energy Information Administration raised the total estimated oil reserves to 11 billion barrels.[16] In 2014 China began to drill for oil in waters disputed with Vietnam.[17]

According to studies made by the Department of Environment and Natural Resources, Philippines, this body of water holds one third of the entire world's marine biodiversity, thereby making it a very important area for the ecosystem. However the fish stocks in the area are depleted, and countries are using fishing bans as a means of asserting their sovereignty claims.[18] 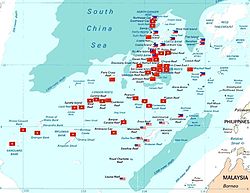 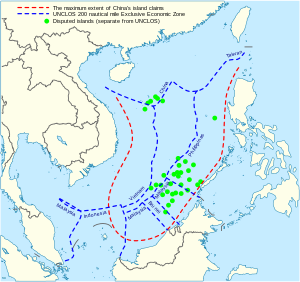 Several countries have made competing territorial claims over the South China Sea. Such disputes have been regarded as Asia's most potentially dangerous point of conflict. Both People's Republic of China (PRC) and the Republic of China (ROC, commonly known as Taiwan) claim almost the entire body as their own, demarcating their claims within what is known as the nine-dotted line, which claims overlap with virtually every other country in the region. Competing claims include:

China and Vietnam have both been vigorous in prosecuting their claims. China (various governments) and South Vietnam each controlled part of the Paracel Islands before 1974. A brief conflict in 1974 resulted in 18 soldiers being killed, and China has controlled the whole of Paracel since then.[citation needed] The Spratly Islands have been the site of a naval clash, in which over seventy Vietnamese sailors were killed just south of Chigua Reef in March 1988. Disputing claimants regularly report clashes between naval vessels.[citation needed]

ASEAN in general, and Malaysia in particular, has been keen to ensure that the territorial disputes within the South China Sea do not escalate into armed conflict. As such, Joint Development Authorities have been set up in areas of overlapping claims to jointly develop the area and dividing the profits equally without settling the issue of sovereignty over the area. This is true, particularly in the Gulf of Thailand. Generally, China has preferred to resolve competing claims bi-laterally,[19] while some ASEAN countries prefer multi-lateral talks,[20] believing that they are disadvantaged in bi-lateral negotiations with the much larger China and that because many countries claim the same territory only multilateral talks could effectively resolve the competing claims.[21]

In July 2010, US Secretary of State Hillary Clinton called for the Peoples Republic of China to resolve the territorial dispute. China responded by demanding the US keep out of the issue. This came at a time when both countries have been engaging in naval exercises in a show of force to the opposing side, which increased tensions in the region.[citation needed] The US Department of Defense released a statement on August 18 where it opposed the use of force to resolve the dispute, and accused China of assertive behaviour.[citation needed] On July 22, 2011, one of India's amphibious assault vessels, the INS Airavat which was on a friendly visit to Vietnam, was reportedly contacted at a distance of 45 nautical miles from the Vietnamese coast in the disputed South China Sea on an open radio channel by a vessel identifying itself as the Chinese Navy and stating that the ship was entering Chinese waters.[22][23] The spokesperson for the Indian Navy clarified that as no ship or aircraft was visible from INS Airavat it proceeded on her onward journey as scheduled. The Indian Navy further clarified that "[t]here was no confrontation involving the INS Airavat. India supports freedom of navigation in international waters, including in the South China Sea, and the right of passage in accordance with accepted principles of international law. These principles should be respected by all." [22]

In September 2011, shortly after China and Vietnam had signed an agreement seeking to contain a dispute over the South China Sea, India's state-run explorer, Oil and Natural Gas Corporation (ONGC) said that its overseas investment arm ONGC Videsh Limited had signed a three-year deal with PetroVietnam for developing long-term cooperation in the oil sector and that it had accepted Vietnam's offer of exploration in certain specified blocks in the South China Sea.[24] In response, Chinese Foreign Ministry spokesperson Jiang Yu issued a protest.[25][26] The spokesman of the Ministry of External Affairs of the Government of India responded by saying that “The Chinese had concerns but we are going by what the Vietnamese authorities have told us and have conveyed this to the Chinese.”[25] The Indo-Vietnamese deal was also denounced by the Chinese state-run newspaper Global Times.[24][26]

In January 2013, The Philippines government said it will take China to a UN tribunal under the auspices of the United Nations Convention on the Law of the Sea, to challenge its claims in the South China Sea.[27]

In May 2014, China established an oil rig near the Paracel Islands, leading to multiple incidents between Vietnamese and Chinese ships.[27][28]