The South Dakota House of Representatives is the lower house of the South Dakota State Legislature. It is made up of 70 members, two from each legislative district. Two of the state's 35 legislative districts, Districts 26 and 28, are each subdivided into two single-member districts (26A/26B and 28A/28B). This was done in order to prevent dilution of voting strength for the minority of Native Americans in these districts, so that they may elect candidates of their choice. 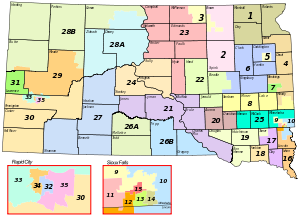 See also: List of Speakers of the South Dakota House of Representatives

Members of the 90th House