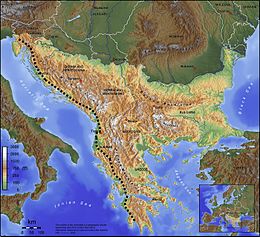 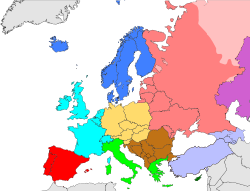 Southeast Europe or Southeastern Europe is a geographical region of Europe, consisting primarily of the Balkan peninsula. Sovereign states that are generally included in Southeastern Europe are, in alphabetical order, Albania, Bosnia and Herzegovina, Bulgaria, Croatia, Cyprus, Greece, Kosovo,[lower-alpha 1] Moldova, Macedonia, Montenegro, Romania, Serbia, and partially Turkey, Italy and Slovenia. These boundaries can vary greatly due to the political, economic, historical, cultural, and geographic considerations of the observer and as such are widely disputed.

The first known use of the term "Southeast Europe" was by Austrian researcher Johann Georg von Hahn (1811–1869) as a broader term than the traditional "Balkans".[1] 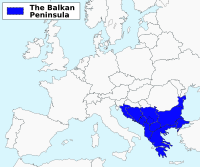 The Balkan Peninsula, as defined by the Danube-Sava-Kupa line

This concept is based on the boundaries of the Balkan peninsula. The countries that have been described as being entirely within the region are: Albania, Kosovo,[2] Bosnia and Herzegovina, Bulgaria, Macedonia and Montenegro.[3] Countries that are, at least partially, described to be within the region are: Croatia, Greece, Italy, Romania, Serbia, Slovenia and Turkey.[4]

Regions within other states

Southern Italy, where the population has prehistoric genetic ties to the Balkans,[8] was part of the ancient Greek world, and where linguistic minorities speak various Balkan languages. 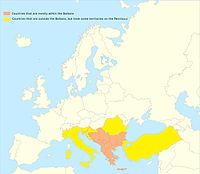 The Stability Pact for South Eastern Europe was an institution aimed at strengthening peace, democracy, human rights and economy in the countries of South Eastern Europe from 1999 to 2008. It was replaced by the Regional Cooperation Council (RCC) in February 2008. The RCC replaced the Stability Pact, which was driven more by outside partners such as the EU, the US, Japan and Turkey, and the countries included were: Albania, Bosnia and Herzegovina, Bulgaria, Croatia, Macedonia, Moldova, Montenegro, Romania, and Serbia.

The South East Europe (SEE) program is a program set up within the framework of the Regional Policy's Territorial Cooperation Objective of the European Union in order to improve integration and competitiveness in the area. It had 235,6 million euro of funding available from 2007-2013.[9]