From Infogalactic: the planetary knowledge core
Jump to: navigation, search
This article is about the Southern Buh River, in southern Ukraine. For the Bug, a tributary of the Vistula River, see Bug River.

The source of the river is in the west of Ukraine, in the Volyn-Podillia Upland, about 145 km from the Polish border, from where it flows southeasterly into the Bug Estuary (Black Sea basin) through the southern steppes. It is 806 kilometres (501 mi) long and drains 63,700 km².

Herodotus (c. 484–425 BCE) refers to the river using its ancient Greek name: Hypanis.[3] During the Migration Period of the 5th to the 8th centuries CE the Southern Bug represented a major obstacle to all the migrating peoples in the area.

From the 16th to the 18th centuries most of the Southern Ukraine formed part of the Crimean Khanate and/or of the Ottoman Empire; the river had the Turkic name Aq-su, meaning the "White river".

"Bug", a Russian name, became established during the colonial period in Ukraine and known internationally. It was a misnomer given[clarification needed] by a Russian geologist Vladimir Laskaryev at the beginning of 20th century.

On March 6, 1918 the Central Council of Ukraine (Tsentralna Rada of the Ukrainian People's Republic) adopted the law "For the administrative-territorial division of Ukraine", dividing Ukraine into numerous lands. One of those lands in the upper stream of the river was named "Boh land" (Ukrainian: Побожжя, Pobozhia). Previously in the 18th century there had existed the Bohogard phalanx (Ukrainian: Бoгоґардівська паланка, Bohogardivska palanka) as part of the Zaporizhian Sich centered in the city of Gard (today  – a tract near Yuzhnoukrainsk). 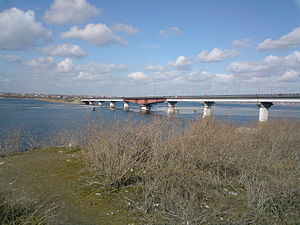 The Varvarivskyi Bridge over Southern Bug in Mykolayiv is a swing bridge (facilitating ship building) with Europe's largest span (134 m).[5] It is also the southernmost bridge over the river.

The river is technically navigable for dozens of kilometers up from its mouth; several riverports (such as Voznesensk) exist.

In 2011, plans are announced to revitalize commercial freight navigation on the Southern Bug as part of the increasing grain export from Ukraine.[6] The were cancelled because of the economic crisis following the 2014 Ukrainian revolution.[citation needed]