The Soviet Air Defence Forces (Russian: войска ПВО, voyska protivovozdushnoy oborony, voyska PVO, V-PVO, lit. Anti-Air Defence Troops; and formerly protivovozdushnaya oborona strany, PVO strany, lit. Anti-Air Defence of the Nation) was the air defence branch of the Soviet Armed Forces. It continued being a service branch of the Armed Forces of the Russian Federation from 1991 to 1998. Unlike Western air defence forces, V-PVO was a branch of the military unto itself, separate from the Soviet Air Force (VVS) and Air Defence Troops of Ground Forces. During the Soviet period it was generally ranked third in importance of the Soviet services,[1] behind the Strategic Rocket Forces and the Ground Forces.

Preparations for creation of the air defence forces started in 1932, and by the start of the war there were 13 PVO zones located within the military districts. At the outbreak of war, air defence forces were in the midst of rearmament. Anti-aircraft artillery teams had few of the latest 37 mm automatic and 85 mm guns. Moreover, the troops were deficient in Yak-1 s and MiG-3s; 46% of the fleet were obsolete aircraft. Increased rates of production were initiated to provide the troops new equipment.

In July 1941, the National Defence Committee took several measures to strengthen the forces guarding Moscow and Leningrad, Yaroslavl and Gorky industrial areas, and strategic bridges across the Volga. To this end, the formation of parts of the IA, IN, anti-aircraft machine gun and searchlight units were accelerated.

A classic example of a major political organization of defence and industrial center was the defence of Moscow. It was carried out by the 1st Air Defence Corps and the 6th Fighter Aviation Corps PVO. As part of these formations at the beginning of massive Nazi air raids had more than 600 fighters; more than 1,000 guns of small and medium calibers; 350 machine guns; 124 fixed anti-aircraft barrage balloons; 612 stations; and 600 anti-aircraft searchlights.[citation needed] The presence of such large forces, skillful management organisation foiled enemy attempts to inflict massive air strikes. Only 2.6% of the total number of Axis aircraft flew in the outskirts of Moscow as a result of their efforts. Air defence forces defending Moscow destroyed 738 enemy aircraft.[citation needed] In addition, assaults by the 6th Fighter Aviation Corps inflicted heavy blows, destroyed 567 enemy aircraft on the ground. Overall, the Air Defence Forces destroyed 1,305 aircraft, and in combat with the enemy armies of Nazi Germany and its allies, alongside the Air Force, destroyed 450 tanks and 5,000 military vehicles.[citation needed]

On November 9, 1941, the post of the Commander of the Air Defence Forces was created, and Major General Mikhail Gromadin (ru:Громадин, Михаил Степанович) was appointed.[2] In January 1942, to improve the interaction of forces and air defence systems, the fighter aircraft and crews manning them were ordered to be subordinated to the Air Defence Command. In April 1942, the Moscow Air Defence Front was founded, and the Leningrad and Baku Air Defence Armies were later raised. There were the first operational formations of the Air Defence Forces.

During the Second World War, the Air Defence Forces provided the defence industry and communication, allowing the breakthrough to the objects only a few planes, so that there were only few devastated enterprises and impaired movement of trains on some sections of railway lines nationwide. In carrying out its tasks, the PVO destroyed 7,313 German aircraft, of which 4,168 and 3,145 were targeted by the IA antiaircraft artillery, machine guns and barrage balloons.[citation needed] More than 80,000 soldiers, sergeants, officers and generals of the Country Air Defence Forces were awarded state orders and medals, and 92 soldiers were awarded the title of Hero of the Soviet Union and one was twice given the honor.

During the war PVO formations were organised as Air Defence Fronts and Air Defence Armies. PVO Fronts normally covered airspace over several ground Army Fronts; these should not be confused with each other. The Air Defence Fronts (Russian: Фронты ПВО) had the following service history:[3]

All the possible air components were divided (as of 1945, before the 1949 reforms of the Soviet Armed Forces) into:[4]

The PVO's principal role was to shoot down United States Strategic Air Command bombers if they penetrated Soviet airspace. Secondary target were U.S. air reconnaissance aircraft. There were a number of such aircraft shot down while operating around the Soviet borders,[6] including MiG-17s downing a US reconnaissance Lockheed C-130 Hercules over Armenia, with 17 casualties in 1958.[7] The PVO gained an important victory on May 1, 1960, when a S-75 Dvina missile downed Gary Powers's U-2, causing the short U-2 crisis of 1960. (See Strategic Air Command#Strategic Reconnaissance)

The PVO had its own chain of command, schools, radar and sound director sites. From the mid-1960s however, PRO, anti-rocket defence, and PKO, anti-space defence, troops began gaining strength under PVO leadership and its high command, eventually forming the basis for the now-Russian Aerospace Defence Forces, formerly the Russian Space Forces. Organisationally, there were two main PVO districts for most of the USSR's postwar history, Moscow and Baku,[1] and the rest of the country was divided into PVO regions like in Belarus, the Ukraine, the Baltics and Central Asia. However, in 1960 it appears that most of the PVO regions/areas were reorganised into seven separate armies of the Air Defence Forces – the 2nd, 4th, 6th, 8th, 10th, 11th, 14th, and 19th Air Defence Army.[8] In 1963 additionally the 12th Air Defence Army was formed.[9]

In 1977, the Air Forces and Air Defence Forces were re-organised in the Baltic states and the Leningrad Oblast (a trial run for the larger re-organisation in 1980 covering the whole country).[10] All fighter units in the PVO were transferred to the VVS, the PVO only retaining the anti-aircraft missile units and radar units – the 6th Independent Air Defence Army was disbanded, and the 15th Air Army became the VVS Baltic Military District.

In a 1981 reorganisation, the now Voyska PVO was stripped of many command and control and training assets, which were moved to the Air Force.

On 1 September 1983 the PVO shot down Korean Air Flight 007 after they correctly believed that the civilian airliner had illegally crossed into restricted Soviet airspace but mistook it for a spy plane. Previously Korean Air Flight 902 had once crossed into Murmansk airspace,[12][13] and had to make an emergency landing when a Soviet Air Force Su-15 fired on it. Soviet government officials finally admitted their mistake much to the anger of the South Korean and the United States governments. It even resulted in the forced and sudden resignation of the then Armed Forces Chief of the General Staff, Marshal Nikolai Ogarkov, in the following year by the Chairman of the Presidium of the Supreme Soviet of the Soviet Union (leader of the Soviet Union) Konstantin Chernenko.

Mathias Rust's flight to Moscow in May 1987 caused a massive shakeup within the PVO.[14] It seems that after the KAL 007 shootdown of 1983, no one was willing to give an order to bring Rust's tiny Cessna 172 down, and modernization programmes within the PVO had led to the installation of radar and communications systems at the state border that could not effectively pass tracking data to systems closer to Moscow. PVO Commander-in-Chief Marshal A. I. Koldunov was only among the first to be removed from his position. Over 150 officers, mostly from the PVO, were tried in court and removed from their posts. A large-scale changeover of senior officers of the force more generally followed as well.

Under the Russian flag

In December 1994, the 4th Air Defence Army was transformed into the 5th Separate Air Defence Corps, which in 1998 became the 5th Army of VVS and PVO. In 1998, the force groupings and headquarters of the PVO that had remained within Russia were merged with the Russian Air Force becoming part of the Moscow District of Air and Air Defence Forces, and the 4th, 5th, 6th, 11th, and 14th Armies of VVS and PVO.

The Day of Air Defence Forces (Den' Voysk PVO) was initially established in 1975, to be celebrated on April 11. In 1980 this was changed to the second Sunday of April.[citation needed] It is still celebrated in the Russian Federation even after the 1998 merger of the Air Defence Forces with the Air Force. The unofficial motto of the Forces is 'Сами не летаем – другим не дадим'('Sami ne letaem – drugim ne dadim'), which can be translated as "Don't fly – don't let others" / "If we can't fly – we won't let anyone else either".

The post was then disestablished with the merger of the PVO and VVS in 1998.

The PVO structure during the Cold War and in Russia until 1998 consisted of three specialized branches: the Radiotechnical Troops (радиотехнические войска), Surface-to-Air Missile Troops (зенитно-ракетные войска), and Fighter Aviation (истребительная авиация; istrebitel'naya aviatsiya; IA-PVO).[1] Armies, corps, and divisions of the PVO were made up of units from all three branches.[16]

Feskov et al. reports the 470th Guards Fighter Aviation Regiment in addition, but Holm's information makes it likely this is a mistake. The regiment is reported at Afrikanda. 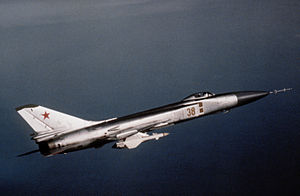