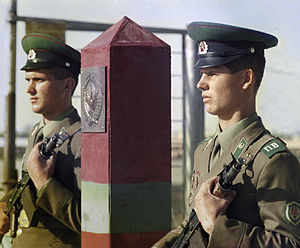 Soviet Border Troops, (Russian: Пограничные войска СССР, Pogranichnyye Voiska SSSR) were the militarized border guard of the Soviet Union, subordinated to its subsequently reorganized state security agency: first to Cheka/OGPU, then to NKVD/MGB and, finally, to KGB. Accordingly, they were known as NKVD Border Troops and KGB Border Troops (with Russian abbreviations - НКВД СССР/- КГБ СССР added on the end of official names). Unlike border guards of many other countries, Soviet Border Troops also included the maritime borderguarding units (i.e., a coast guard).

The mission of the Border Troops included repulsing armed incursions into Soviet territory; preventing illegal crossings of the border or the transport of weapons, explosives, contraband, or subversive literature across the border; monitoring the observance of established procedures at border crossing points; monitoring the observance by Soviet and foreign ships of navigation procedures in Soviet territorial waters; and assisting state agencies in the preservation of natural resources and the protection of the environment from pollution. Border guards were authorized to examine documents and possessions of persons crossing the borders and to confiscate articles; to conduct inquiries in cases of violations of the state border; and to take such actions as arrest, search, and interrogation of individuals suspected of border violations.

Since the 1930s, the distinctive part of Soviet Border Troops uniform was the medium-green colored parts of headwear and insignia. The color is also present on a maritime Border Troops ensign.

After the Molotov–Ribbentrop Pact, the Border Troops assisted the pacification of the newly acquired Soviet territory adjoining the state border. The mass execution of Romanian civilians known as the Fântâna Albă massacre happened at this time.

Border Troops units on the western USSR frontier saw particularly fierce combat in the first weeks of the German invasion of the USSR (June–July 1941). They bore the brunt of the initial German assault, and due to this, suffered high casualty rates. Border Troop servicemen were among the defenders of the Brest Fortress. Border troops from other parts of the Soviet border were also involved in the fighting of the war. Notably, the 105th, 157th, and 333rd Border Troops regiments (operating like regular army units) took part in the Battle for Berlin in 1945.

During and after the war, 150 border guards were awarded the title of the Hero of the Soviet Union and over 13,000 of them were decorated with different orders and medals. 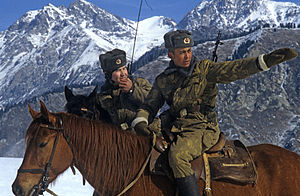 In wartime the Border Troops would become a frontline combat service. The Border Troops also saw combat in 1969 in border clashes with Chinese soldiers on islands in the Ussuri River.

After the formation of the KGB, Soviet Border Troops became subordinated to this agency and remained so until the dissolution of the Soviet Union. As such, the Troops were concentrating on the tasks of preventing espionage infiltrations. The Border Guards were involved in the fighting during the Sino-Soviet border conflict and the Soviet war in Afghanistan and a number of them were even awarded the Hero of the Soviet Union for their bravery during these conflicts.

The Soviet border was the longest in the world and it comprised harsh terrain and climates; accordingly the Border Troops employed significant manpower, intensive maritime presence, and a dense and sophisticated system of field engineering devices. The most notable in that system was the trace-control strip (Russian: контрольно-следовая полоса) - a primitive labour-demanding method making surface crossing virtually impossible.[citation needed]

The Border Troops consisted of conscripts drafted by the same system as for the Soviet Army, and small number of professional enlistees. Officers were trained in specialized academies. Both conscripts and officer candidates for Border Troops were carefully selected and checked by the KGB. This made service in the troops privileged.

Commanders of the Soviet Border Guards 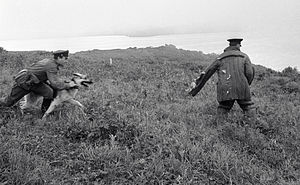 The legal status, duties, and rights of the Border Troops were set forth in the Law on the State Border, confirmed by the Supreme Soviet on November 24, 1982. Article 28 defined the basic duties of the Border Troops. Their duties included repulsing armed incursions into Soviet territory; preventing illegal crossings of the border or the transport of weapons, explosives, contraband, or subversive literature across the border; monitoring the observance of established procedures at border crossing points; monitoring the observance by Soviet and foreign ships of navigation procedures in Soviet territorial waters; and assisting state agencies in the preservation of natural resources and the protection of the environment from pollution. Border guards were authorized to examine documents and possessions of persons crossing the borders and to confiscate articles; to conduct inquiries in cases of violations of the state border; and to take such actions as arrest, search, and interrogation of individuals suspected of border violations.

The Border Troops strength was estimated in 1989 to be in the range of 230,000 men. Although under the operational authority of the KGB, the Border Troops were conscripted as part of the biannual call-up of the Ministry of Defense, and their induction and discharge were regulated by the 1967 Law on Universal Military Service, which covered all armed forces of the Soviet Union.[1]

The Maritime Border Troops of the Russian Border Troops operated within the twelve-mile limit of Soviet territorial waters. It was equipped with frigates and corvettes, fast patrol boats, hydrofoils, helicopters, and light aircraft.[5]

In 1989 the 103rd Guards Airborne Division, Soviet Airborne Forces, was transferred briefly to the Border Troops.

Enlisted men were trained with their operational units, whereas officers were trained in special Border Troops schools, such as the Dzerzhinskii Higher Border Command School in Alma-Ata (Kazakh SSR) and the Mossovet Higher Border Command School in Moscow. Military-political officers received training at the Voroshilov Higher Border Military-Political School, founded in the 1930s and located outside Leningrad. In 1972 a higher border military-political school was created in Golytsin, near Moscow. More recently, higher border command faculties were set up at the Frunze Military Academy and the Lenin Military-Political Academy. The period of instruction at the Higher Border Command and Military-Political Schools was four years. Officer candidates, who were screened carefully by their local KGB offices before admittance, took general higher education courses along with specialized military and political studies.

Soviet sources repeatedly stressed that a border guard was not only a soldier but also a defender of Soviet ideology. His mission entailed sensitive political tasks, such as detecting subversive literature. To ensure a high level of discipline among personnel of the Border Troops, much attention was devoted to political training and indoctrination. For this purpose, a network of political organs, the Political Directorate of the Border Troops, was established within the Border Troops. It had political departments within all the border districts, detachments, and education institutions, and a network of full-time party political officers worked among all troop units. They conducted political study groups, gave propaganda lectures, and worked to increase the level of combat effectiveness among the troops.

With the fall of Soviet Union, Border Troops formations in most Soviet republics became border guards of the respective independent states. These new guards mostly changed their name and subordination. The new states of Armenia and Tajikistan are unique exceptions. Tajikistan's border with Afghanistan was guarded by the Russian Border Guard (engaging in heavy fighting) until the late 1990s under a special treaty.[citation needed] Armenia's border is still guarded by Russians under similar conditions.[citation needed]

In Russia and some other post-Soviet states the Border Troops retained some Soviet traditions, most notably the green shoulder boards on their uniforms and "Border Guard's Day" (Russian: День пограничника), an official holiday celebrated both by active service and former border guards.