Government of the Soviet Union

The Government of the Union of Soviet Socialist Republics (Russian: Правительство СССР, Pravíteljstvo SSSR) was the main body of the executive branch of government in the Soviet Union. It was led by the head of the government, in the West referred to as the Premier of the Soviet Union.

In addition, during the last days of the Soviet Union, the following interim bodies performed functions of the union government (management of the economy and carrying out economic and social reforms) after the Cabinet Ministers was dissolved by a vote of no confidence. However eventually no new full government was formed due to the dissolution of the Soviet Union.

The term was also used by the government itself, the press and colloquially to mean the executive branch alone, as the branch of the government was responsible for day-to-day governance of the nation—when a Premier headed or formed a government.

Powers of the Government 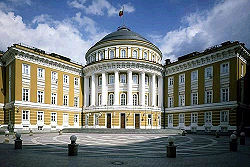 Kremlin Senate, the building which used to house the Government of the Union of Soviet Socialist Republics

The Government of the Soviet Union, and the main executive power of the Soviet state, were both headed by the premier, who had an unspecified amount of first deputy chairmen, and deputy chairmen of the government, all of which are given responsibility over one specific area. A varying amount of government ministers and state committee chairmen, recommended by the premier and appointed by the Presidium of the Supreme Soviet. The executive branch was responsible for both short- and long term economic, social and cultural development. The Government's official residence was at the Kremlin Senate in Moscow.

The Government of the Union of Soviet Socialist Republics exercised its executive powers in conformity with the Soviet Constitution and legislation enacted by the Supreme Soviet. Its structure, operational procedures and decision-making processes were defined by the 1977 Soviet constitution. The Constitution mandated that the Government proposed legislation and other documents to the Supreme Soviet, proposed the budget and guided the economy, issued decisions and ordinances and verified their execution. The decisions and ordinances of the Council of Ministers of the USSR shall be binding throughout the USSR—these decisions and ordinances were binding throughout the country. It defined internal policies, directed and oversaw operation of state administration, oversaw the country's economic development, directed the activities and development of public services and performed other activities which conformed to the provisions of the Constitution and applicable legislation. The Government also controlled foreign trade and had directed the "general development" of the Soviet armed forces.

The Government managed the internal sphere of the Union of Soviet of Socialist Republics' social policy. It was responsible for implementing measures which would either promote or ensure the well-being of Soviet citizens through economic, social and economic development. On the economic sphere, the government was responsible for monetary, technological, pollution, price wages and social security policies, controlled all All-Union, literally institutions controlled by the Central Government, and All-Republican institutions. For instance, the Government controlled the State Bank and was responsible for the organisation of state insurance and accounting. It was the Government which drafted the five-year plans for economic and social development, through its control of the State Planning Committee, and the country's budget, through its control of the Ministry of Finance. Both the five-year plan and the budget needed approval from the Supreme Soviet to be implemented. It was responsible for socialist property, public order and the protection of its citizen's.