Admiral Flota Sovetskogo Soyuza Kuznetsov (Russian: Адмира́л фло́та Сове́тского Сою́за Кузнецо́в "Admiral of the Fleet of the Soviet Union Kuznetsov") was built by the Black Sea Shipyard, the sole manufacturer of Soviet aircraft carriers, in Mykolaiv within the Ukrainian Soviet Socialist Republic. The initial name of the ship was Riga; she was launched as Leonid Brezhnev, embarked on sea trials as Tbilisi, and finally named Kuznetsov.[6] She is an aircraft cruiser (heavy aircraft-carrying missile cruiser (TAVKR) in Russian classification) serving as the flagship of the Russian Navy.

She was originally commissioned in the Soviet Navy, and was intended to be the lead ship of her class, but the only other ship of her class, Varyag, was never completed or commissioned by the Soviet, Russian or Ukrainian navy. This second hull was eventually sold to the People's Republic of China by Ukraine, completed in Dalian and launched as Liaoning.[7] Kuznetsov was named after the Admiral of the Fleet of the Soviet Union Nikolay Gerasimovich Kuznetsov.

While designated an aircraft carrier by the West, the design of the Admiral Kuznetsov-class implies a mission different from that of either the United States Navy’s carriers or those of the Royal Navy. The term used by her builders to describe the Russian ships is tyazholyy avianesushchiy raketnyy kreyser (TAVKR or TARKR) – "heavy aircraft-carrying missile cruiser" – intended to support and defend strategic missile-carrying submarines, surface ships, and naval missile-carrying aircraft of the Russian Navy.

Admiral Kuznetsov's main fixed-wing aircraft is the multi-role Sukhoi Su-33. It can perform air superiority, fleet defence, and air support missions and can also be used for direct fire support of amphibious assault, reconnaissance and placement of naval mines.[8]

The carrier also carries the Kamov Ka-27 and Kamov Ka-27S helicopters for anti-submarine warfare, search and rescue, and small transport.

For take-off of fixed wing aircraft, Admiral Kuznetsov uses a ski-jump at the end of her deck. On take-off aircraft accelerate toward and up the ski-jump using their afterburners. This results in the aircraft leaving the deck at a higher angle and elevation than on an aircraft carrier with a flat deck and catapults. The ski-jump take-off is less demanding on the pilot, since the acceleration is lower, but results in a clearance speed of only 120–140 km/h (75–85 mph) requiring an aircraft design which will not stall at those speeds.[9]

The cruiser role is facilitated by Kuznetsov's complement of 12 long-range surface-to-surface anti-ship Granit (SS-N-19) (NATO name: Shipwreck) cruise missiles. As a result, this armament is the basis for the ship's Russian type designator of "heavy aircraft-carrying missile cruiser".

File:USS Deyo with Admiral Kuznesov.jpg
Kuznetsov in the waters south of Italy with USS Deyo, foreground, steaming off her port side.

Admiral Flota Sovetskovo Soyuza Kuznetsov, constructed at Nikolayev South Shipyard in Mykolaiv, Ukrainian SSR, was launched in 1985, and became fully operational in 1995. An official ceremony marking the start of construction took place on 1 September 1982; in fact she was laid down in 1983. The vessel was first named Riga, then the name was changed to Leonid Brezhnev, this was followed by Tbilisi. Finally, on 4 October 1990,[10] she was renamed Admiral Flota Sovetskovo Soyuza Kuznetsov, referred to in short as Admiral Kuznetsov.[6] The ship was 71% complete by mid-1989. In November 1989 she undertook her first aircraft operation trials. In December 1991, she sailed from the Black Sea to join the Northern Fleet. Only from 1993 on did she receive aircraft.

From 23 December 1995 through 22 March 1996 Kuznetsov made its first 90-day Mediterranean deployment with 13 Su-33, 2 Su-25 UTG, and 11 helicopters aboard.[11] The deployment was to allow the carrier, which was accompanied by a frigate, destroyer and oiler, to adapt to the Mediterranean climate and to perform continuous flight operations until 21:00 each day, as the Barents Sea only receives about one hour of sunlight during this time of year.[12] This cruise marked the 300th anniversary of the Russian Navy celebrated in 1996. During that period the carrier lay at anchor off the port of Tartus, Syria.[13] Her aircraft often made flights close to the Israeli shore line and were intercepted by Israeli F-16s.[13] During the deployment, a severe water shortage occurred due to evaporators breaking down.[12]

At the end of 1997 she remained immobilized in a Northern Fleet shipyard, awaiting funding for major repairs, which were halted when they were only 20% complete. The overhaul was completed in July 1998, and the ship returned to active service in the Northern fleet on 3 November 1998.

File:Sukhoi Su-33 on Admiral Kuznetsov-1.jpg
Sukhoi Su-33 aircraft aboard Kuznetsov during exercises in the Barents Sea in 2008.

Kuznetsov remained in port for about two years before preparing for another Mediterranean deployment scheduled for the winter of 2000–2001. This deployment was cancelled due to the explosion and sinking of the nuclear-powered submarine Kursk. The Kuznetsov participated in the Kursk rescue and salvage operations in late 2000. Plans for further operations were postponed or cancelled. In late 2003 and early 2004, Kuznetsov went to sea for inspection and trials. In October 2004, she participated in a fleet exercise of the Russian Navy in the Atlantic Ocean.[14] During a September 2005 exercise, an Su-33 accidentally fell from the carrier into the Atlantic Ocean.[15] On 27 September 2006, it was announced that Kuznetsov will return to service in the Northern Fleet by the year's end, following another modernization to correct some technical issues. Admiral Vladimir Masorin, Commander-in-Chief of the Russian Navy, also stated that Su-33 fighters assigned to her would returned after undergoing their own maintenance and refits.

From 5 December 2007 through 3 February 2008 Kuznetsov made its second Mediterranean deployment.[11] On 11 December 2007, Kuznetsov passed by Norwegian oil platforms in the North Sea, 60 nautical miles (110 km) outside Bergen, Norway.[16] Su-33 fighters and Kamov helicopters were launched from Kuznetsov while within international waters; Norwegian helicopter services to the rigs were halted due to the collision risk with the Russian aircraft. Kuznetsov later participated in an exercise on the Mediterranean Sea, together with 11 other Russian surface ships and 47 aircraft, performing three tactical training missions using live and simulated air and surface missile launches.[17] Kuznetsov and its escorts returned to Severomorsk on 3 February 2008. Following maintenance, she returned to sea on 11 October 2008 for the Stability-2008 strategic exercises held in the Barents Sea, during which the President of Russia Dmitry Medvedev visited her on 12 October 2008.

From 5 December 2008 through 2 March 2009, Kuznetsov made its third Mediterranean deployment.[11] On 5 December 2008, she and several other vessels left Severomorsk for the Atlantic for a combat training tour, including joint drills with Russia's Black Sea Fleet and visits to several Mediterranean ports.[18][19] On 7 January 2009, a small fire broke out onboard Kuznetsov while anchored off Turkey. The fire, caused by a short-circuit, led to the death of one crew member by carbon monoxide poisoning.[20] On 16 February 2009, she, along with other Russian naval vessels, was involved in a large oil spill while refuelling off the south coast of Ireland.[21] On 2 March 2009, Kuznetsov returned to Severomorsk. In September 2010 Kuznetsov left dry dock after scheduled repairs and preparations for a training mission in the Barents Sea later that month.

File:MOD UK 45153831.jpg
Kuznetsov is shadowed by the British destroyer HMS York off the British coast en route to her 2011 deployment to the Mediterranean

The Russian Main Navy Staff announced that Kuznetsov would begin a deployment to the Atlantic and Mediterranean in December 2011. In November 2011, it was announced that Kuznetsov would lead a squadron to Russia's naval facility in Tartus as a show of support for the Assad government.[22][23] A contrary statement was made by a Russian naval spokesman to the Izvestia daily that "The call of the Russian ships in Tartus should not be seen as a gesture towards what is going on in Syria... This was planned already in 2010 when there were no such events there" noting that Kuznetsov would also be making port calls in Beirut, Genoa and Cyprus.[24] On 29 November 2011, Army General Nikolay Makarov, Chief of the Russian General Staff, said that Russian ships in the Mediterranean were due to exercises rather than events in Syria, and noted that the Kuznetsov's size does not allow it to moor in Tartus.[25]

On 6 December 2011, Kuznetsov and escorting ships departed its Northern Fleet homebase for the Mediterranean deployment to exercise with ships from the Russian Baltic and Black Sea Fleets.[26] On 12 December 2011 Kuznetsov and its escorts, was spotted northeast of Orkney off the coast of northern Scotland, the first such time she had deployed near the UK. HMS York shadowed the group for a week; due to severe weather, the group took shelter in international waters in the Moray Firth, some 30 miles from the UK coast. The Kuznetsov then sailed around the top of Scotland and into the Atlantic past western Ireland, where it conducted flight operations with her Sukhoi Su-33 Flanker jets and Kamov Ka-27 helicopters in international airspace.[27] On 8 January 2012, Kuznetsov anchored near shore outside Tartus while other ships in its escort entered the port to use the leased Russian naval support facility to replenish their supplies, after which all ships continued their deployment on 9 January.[28] On 17 February 2012, Kuznetsov returned to its homebase of Severomorsk.[citation needed] 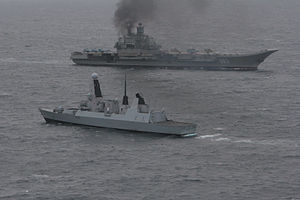 On 1 June 2013, it was announced that the ship would return to the Mediterranean by the end of the year.[29] On 17 December, Kuznetsov departed her homebase for the Mediterranean.[30] On 1 January 2014, Kuznetsov celebrated New Year while at anchor in international waters of the Moray Firth off northeast Scotland. The anchorage allowed replenishment of ship's supplies and respite for the crew from stormy weather off the southwest coast of Norway. She then proceeded to the Mediterranean Sea,[31] docking in Cyprus on 28 February.[32]

In May 2014, the ship and its task group: the Kirov-class nuclear-powered cruiser Petr Velikiy; three tankers; Sergey Osipov, Kama and Dubna; one ocean-going tug Altay and the tank-landing ship Minsk (a Ropucha-class landing ship part of the Baltic Fleet?) sailed home and approached the UK.[33]

Although financial and technical problems have resulted in limited operations for the ship,[34] it is expected that Admiral Kuznetsov will remain in active duty until at least 2030.[35]

In April 2010, it was announced that by the end of 2012 the ship will enter Severodvinsk Sevmash shipyard for a major refit and modernisation.[36] This refit will reportedly include upgrades to the obsolete electronics and sensor equipment, installation of a new anti-aircraft system and increase of the air wing by the removal of the P-700 Granit anti-ship missiles; it may also include exchanging the troublesome steam powerplant to gas-turbine or even nuclear propulsion and installation of catapults to the angled deck.[36]

According to the newspaper "Bulletin Reports," the Russian Navy expects to buy the Mikoyan MiG-29K for Admiral Kuznetsov by 2011, this intent was confirmed by the general designer of one of the defence enterprises which produces sub-assemblies for these aircraft.[37][38] These shall replace the 19 carrier-based Su-33 fighters, a resource set to expire by 2015; producing Su-33s is possible, but not cost-effective for such small volumes, but the MiG-29K is more convenient as the Indian Navy placed an order a total of 45, lessening cost and reducing development cost. India paid 730 million dollars for the development and delivery of 16 MiG-29Ks, 24 more for the Russian Navy would cost about $1 billion.[37]