The Soviet calendar added five- and six-day work weeks between 1929 and 1940 to the Gregorian calendar adopted by Russia in 1918. Although the traditional seven-day week was still recognized, a day of rest on Sunday was replaced by one day of rest in each work week. Many sources erroneously state that the weeks were organized into 30-day months. 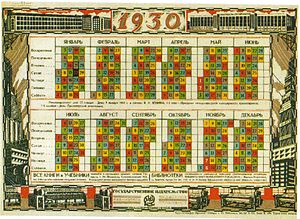 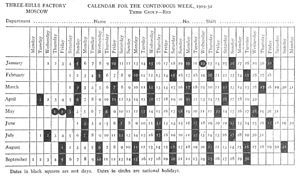 Sample of a Soviet calendar (January–September 1930) taken from an American publication.
One worker's red rest days of the five-day work week

From the autumn of 1929 until the summer of 1931, each Gregorian calendar year was usually divided into 72 five-day weeks (=360 days), three of which were split into two partial weeks by five national holidays. The two parts of each split week still totaled five days—the one or two national holidays that split it were not part of that week. Each day of the five-day week was labeled by either one of five colors or a Roman numeral from I to V. Each worker was assigned a color or number to identify his or her day of rest.

Eighty per cent of each factory's workforce was at work every day (except holidays) in an attempt to increase production while 20% were resting. But if a husband and wife, and their relatives and friends, were assigned different colors or numbers, they would not have a common rest day for their family and social life. Furthermore, machines broke down more frequently both because they were used by workers not familiar with them, and because no maintenance could be performed on machines that were never idle in factories with continuous schedules (24 hours/day every day). Five-day weeks (and later six-day weeks) "made it impossible to observe Sunday as a day of rest. This measure was deliberately introduced 'to facilitate the struggle to eliminate religion'".[1]

The colors vary depending on the source consulted. The 1930 color calendar displayed here has days of purple, blue, yellow, red, and green, in that order beginning 1 January.[2] Blue was supported by an anonymous writer in 1936 as the second day of the week, but he stated that red was the first day of the week.[3] However, most sources replace blue with either pink,[4][5][6][7][8] orange,[9][10][11] or peach,[12] all of which specify the different order yellow, pink/orange/peach, red, purple, and green. The partial 1930 black and white calendar from Kingsbury and Fairchild (1935) displayed here does not conform to any of these because its red day is the fifth day of the week, which even disagrees with their own statement that red was the third day of the week.[9] 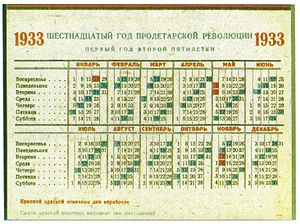 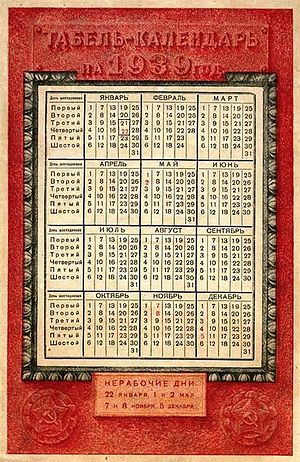 From the summer of 1931 until 26 June 1940, each Gregorian month was usually divided into five six-day weeks, more and less (as shown by the 1933 and 1939 calendars displayed here).[2] The sixth day of each week was a uniform day off for all workers, that is days 6, 12, 18, 24, and 30 of each month. The last day of 31-day months was always an extra work day in factories, which, when combined with the first five days of the following month, made six successive work days. But some commercial and government offices treated the 31st day as an extra day off. To make up for the short fifth week of February, 1 March was a uniform day off followed by four successive work days in the first week of March (2–5). The partial last week of February had four work days in common years (25–28) and five work days in leap years (25–29). But some enterprises treated 1 March as a regular work day, producing nine or ten successive work days between 25 February and 5 March, inclusive. The dates of the five national holidays did not change, but they now converted five regular work days into holidays within three six-day weeks rather than splitting those weeks into two parts (none of these holidays was on a "sixth day").[3][5][9]

On 10 December 1918 six Bolshevik holidays were decreed during which work was prohibited.[13][14]

In January 1925, the anniversary of Lenin's Death in 1924 was added on 21 January. Although other events were commemorated on other dates, they were not days of rest. Originally, the "May holidays" and "November holidays" were one day each (1 May and 7 November), but both were extended from one to two days in 1928, making 2 May and 8 November public holidays as well.[16]

Until 1929, regional labor union councils or local governments were authorized to set up additional public holidays, totaling to up to 10 days a year. Although people would not work on those days, they would not be paid holidays.[17][18] Typically, at least some of these days were used for religious feast, typically those of the Russian Orthodox Church, but in some localities possibly those of other religions as well.[19]

Two Journal of Calendar Reform articles (1938 and 1943) have two misunderstandings, specifying 9 January and 26 October, not realizing that both are Julian calendar dates equivalent to the unspecified Gregorian dates 22 January and 8 November, so they specify 9 January, 21 January, 1 May, 26 October, and 7 November, plus a quadrennial leap day.[4][6] 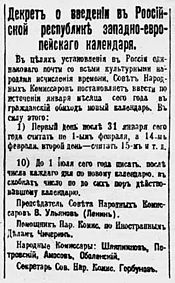 The Gregorian calendar was implemented in Russia on 14 February 1918 by dropping the Julian dates of 1–13 February 1918 pursuant to a Sovnarkom decree signed 24 January 1918 (Julian) by Vladimir Lenin. The decree required that the Julian date was to be written in parentheses after the Gregorian date until 1 July 1918.[23] All surviving examples of physical calendars from 1929–40 show the irregular month lengths of the Gregorian calendar (such as those displayed here). Most calendars displayed all the days of a Gregorian year as a grid with seven rows or columns for the traditional seven-day week with Sunday first. 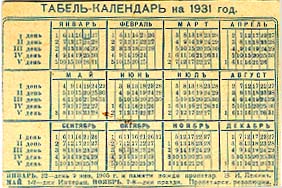 The 1931 pocket calendar displayed here is a rare example that excluded the five national holidays, enabling the remaining 360 days of the Gregorian year to be displayed as a grid with five rows labeled I–V for each day of the five-day week.[24] Even it had the full Gregorian calendar on the other side. Throughout this period, Pravda, the official newspaper of the Communist Party, and other newspapers continued to use Gregorian calendar dates in their mastheads alongside the traditional seven-day week.[3][5] Pravda dated individual issues with 31 January, 31 March, 31 May, 31 July, 31 August, 31 October, and 31 December, but never used 30 February during the period 1929–1940. The traditional names of "Resurrection" (Воскресенье) for Sunday and "Sabbath" (Суббота) for Saturday continued to be used, despite the government's officially anti-religious atheistic policy. In rural areas, the traditional seven-day week continued to be used despite official disfavor.[3][5][11] Several sources from the 1930s state that the old Gregorian calendar was not changed.[3][9][25] Two modern sources explicitly state that the structure of the Gregorian calendar was not touched.[26][27]

A 1929 Time magazine article reporting Soviet five-day work weeks, which it called an "Eternal calendar", associated them with the French Republican Calendar, which had months containing three ten-day weeks.[28] In February 1930 a government commission proposed a "Soviet revolutionary calendar" containing twelve 30-day months plus five national holidays that were not part of any month, but it was rejected because it would differ from the Gregorian calendar used by the rest of Europe.[29] Four Journal of Calendar Reform articles (1938, 1940, 1943, 1954) thought that five-day weeks actually were organized into 30-day months,[4][5][6][30] as do several modern sources.[7][8][11][31] 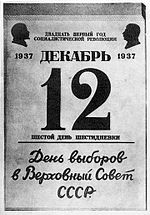 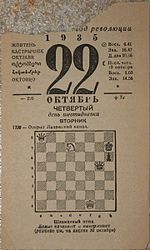 During the second half of May 1929, Yuri Larin (Юрий Ларин, 1882–1932) proposed a continuous production week (nepreryvnaya rabochaya nedelya = nepreryvka) to the Fifth Congress of Soviets of the Union, but so little attention was paid to his suggestion that the president of the Congress did not even mention it in his final speech. By the beginning of June 1929, Larin had won the approval of Joseph Stalin, prompting all newspapers to praise the idea. On 8 June 1929 the Supreme Economic Council of the RSFSR directed its efficiency experts to submit within two weeks a plan to introduce continuous production. Before any plan was available, during the first half of June 1929, 15% of industry had converted to continuous production according to Larin, probably an overestimate. On 26 August 1929 the Council of People's Commissars (CPC) of the Soviet Union (Sovnarkom) declared "it is essential that the systematically prepared transition of undertakings and institutions to continuous production should begin during the economic year 1929–1930".[20][33] The lengths of continuous production weeks were not yet specified, and the conversion was only to begin during the year. Nevertheless, many sources state that the effective date of five-day weeks was 1 October 1929,[5][7][10][11][12][34] which was the beginning of the economic year. But many other lengths of continuous work weeks were used, all of which were gradually introduced.

Specific lengths for continuous production weeks were first mentioned when rules for the five-day continuous work week were issued on 24 September 1929. On 23 October 1929 building construction and seasonal trades were put on a continuous six-day week, while factories that regularly halted production every month for maintenance were put on six- or seven-day continuous production weeks. In December 1929, it was reported that about 50 different versions of the continuous work week were in use, the longest being a 'week' of 37 days (30 continuous days of work followed by seven days of rest). By the end of 1929, orders were issued that the continuous week was to be extended to 43% of industrial workers by 1 April 1930 and to 67% by 1 October 1930. Actual conversion was more rapid, 63% by 1 April 1930. In June 1930 it was decreed that the conversion of all industries was to be completed during the economic year 1930–31, except for the textile industry. But on 1 October 1930 peak usage was reached, with 72.9% of industrial workers on continuous schedules. Thereafter, usage decreased. All of these official figures were somewhat inflated because some factories said they adopted the continuous week without actually doing so. The continuous week was applied to retail and government workers as well, but no usage figures were ever published.[20][29][35]

As early as May 1930, while usage of the continuous week was still advancing, some factories reverted to an interrupted week. On 30 April 1931, one of the largest factories in the Soviet Union was put on an interrupted six-day week (Шестидневка = shestidnevka). On 23 June 1931, Stalin condemned the continuous work week as then practiced, supporting the temporary use of the interrupted six-day week (one common rest day for all workers) until the problems with the continuous work week could be resolved. During August 1931, most factories were put on an interrupted six-day week as the result of an interview with the People's Commissar for Labor, who severely restricted the use of the continuous week. The official conversion to non-continuous schedules was decreed by the Sovnarkom of the USSR somewhat later, on 23 November 1931.[12][35][36] Institutions serving cultural and social needs and those enterprises engaged in continuous production such as ore smelting were exempted.[37] It is often stated that the effective date of the interrupted six-day work week was 1 December 1931,[4][6][7][11][12][36] but that is only the first whole month after the 'official conversion'. The massive summer 1931 conversion made this date after-the-fact and some industries continued to use continuous weeks. The last figures available indicate that on 1 July 1935 74.2% of all industrial workers were on non-continuous schedules (almost all six-day weeks) while 25.8% were still on continuous schedules. Due to a decree dated 26 June 1940, the traditional interrupted seven-day week with Sunday as the common day of rest was reintroduced on 27 June 1940.[23][24][35][38]