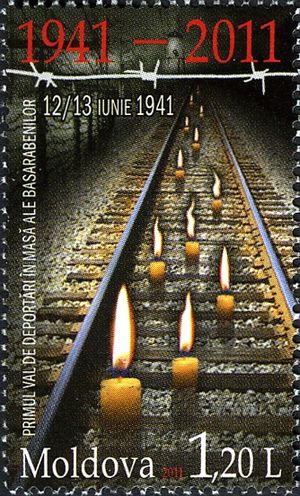 The Soviet deportations from Bessarabia and Northern Bukovina took place between late 1940 and 1951 and were part of Joseph Stalin's policy of political repression of the potential opposition to the Soviet power (see Population transfer in the Soviet Union). The deported were typically moved to so-called "special settlements" (спецпоселения) (see Involuntary settlements in the Soviet Union).

In 1940, after the Romanian government agreed to a Soviet ultimatum and retreated from Bessarabia and northern Bukovina, these regions were incorporated into the Soviet Union, most of the former being organized as the Moldavian SSR, while the other areas were attributed to the Ukrainian SSR. On June 12–13, 1941, 29,839 members of families of "counter-revolutionaries and nationalists" from the Moldavian SSR, and from the Chernivtsi (of Northern Bukovina) and Izmail oblasts of the Ukrainian SSR were deported to Kazakhstan, the Komi ASSR, the Krasnoyarsk Krai, and the Omsk and Novosibirsk oblasts. For the fate of such a deportee from Bessarabia, see the example of Eufrosinia Kersnovskaya. The Georgian NKVD official Sergo Goglidze, trusted henchman of Lavrenty Beria, was in charge of this deportation from Bessarabia.

On June 22, 1941, Nazi Germany, together with several other countries, including Romania, attacked the Soviet Union (see Operation Barbarossa). After the start of the war, further mass deportations occurred in the USSR. In April 1942, Romanians and some other nationalities were deported from Crimea and the North Caucasus. In June 1942, Romanians and others were deported from Krasnodar Krai and the Rostov Oblast.

On April 6, 1949, the Political Bureau of the Central Committee issued decision number 1290-467cc, which called for 11.280 families from Moldavian SSR to be deported as kulaks or collaborators with the "German fascists occupier" during World War II. Ultimately, 11,239 families, comprising 35,050 were detained and deported on July 6, 1949, with the rest either escaping or being exempt due to their contribution to the Soviet war effort or their support for collectivisation.[1]

On February 19, 1951, Abakumov delivered to Stalin a secret notice which listed the planned numbers of deported "Jehovists" from Ukraine, Belorussia, Estonia, Latvia, Lithuania and Moldova, with 1675 persons (670 families) listed for the latter.[2] On March 3, the USSR Council of Ministers issued the corresponding decree, followed by an order of the Ministry of State Security of February 6. On March 24, the Council of Ministers of the Moldavian SSR issued the decree on the confiscation and selling of the property of the deportees. Operation North started at 4:00 am on April 1, 1951, and the round-ups continued until April 2. The deportees were classified as "special settlers".[3] In total, from the Moldvian SSR, there were 723 families (2,617 persons) deported on the night of March 31 to April 1, 1951, all members of neoprotestant sects, mostly Jehovah's Witnesses, and qualified as religious elements considered a potential danger for the Communist regime.[4][5]

During 1940 and 1941, 53,356 people from Bessarabia and Northern Bukovina were mobilised for forced labour in various areas of the Soviet Union, most of them living and working in poor conditions.[6]

A memorial has been erected in Chișinău, close to Central Station, to commemorate the deportations.