Soviet order of battle for invasion of Poland in 1939

The Soviet order of battle for the invasion of Poland in 1939 details the major combat units arrayed for the Soviet surprise attack on Poland on September 17, 1939. As a result of joining battle after the Germans had already launched their invasion, the Soviets, prepared for battle in secrecy, met comparatively limited resistance. Several skirmishes between the German and Soviet forces did occur, but neither government was prepared for starting a larger conflict, and these were soon referred to as "misunderstandings".[1]

Like the Germans, the Soviets employed two primary offensive axes, each managed by a Front. Each Front commander had at his disposal a mobile group of forces created from cavalry and mechanised troops; a precursor of the cavalry-mechanised groups of the Second World War. 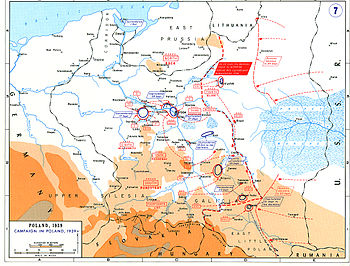 Situation after September 14, 1939 - the map also gives information on placement and movement of some Soviet troops

The effects of the purge are visible in the ranks of the commanders in the order of battle, with only one Army commander serving in the appropriate rank of the Army General, in this case 2nd Class (Komandarm 2nd rank, Russian: командарм 2 ранга), the rest serving in being Corps (Komcor) and Divisional (Komdiv) Commander rank (Russian: комкор, комдив)

The Belorussian Front included four Armies and was the northern of the two fronts invading. Its commander was Komandarm 2nd rank Mikhail Kovalyov. As of September 17, 1939, the Front included:

According to narod.ru, the 3rd Army also included the 150th Rifle Division (in Odessa Military District as third echelon)

The Ukrainian Front covered the southern sector of the Polish front in 1939, and included three Armies, commanded by Komandarm 1st rank Semyon Timoshenko. As of September 17, 1939, the Front included:

Error creating thumbnail: File with dimensions greater than 25 MP
Organization of the Soviet Armies in the Invasion of Poland 17 September 1939[4]