Soviet people or Soviet nation (Russian: советский народ[1]) or Citizens of the USSR (Russian: Граждане СССР) was an umbrella demonym for the population of the Soviet Union. Initially used as a nonspecific reference to the Soviet population, it was eventually declared to be a "new historical, social and international unity of people".[citation needed] 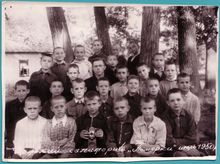 Through the history of the Soviet Union, both doctrine and practice regarding ethnic distinctions within the Soviet population varied over time. Minority national cultures were not completely abolished in the Soviet Union. By Soviet definition, national cultures were to be "socialist by content and national by form", to be used to promote the official aims and values of the state. While the goal was always to cement the nationalities together in a common state structure, as a pragmatic step in the 1920s and early 1930s under the policy of korenizatsiya (indigenization) the leaders of the Communist Party promoted federalism and the strengthening of non-Russian languages and cultures (see national delimitation in the Soviet Union). By the late 1930s, however, policy shifted to more active promotion of Russian language and later still to more overt Russification efforts, which accelerated in the 1950s[citation needed] especially in areas of public education. Although some assimilation did occur, this effort did not succeed on the whole as evidenced by developments in many national cultures in the territory after the dissolution of the Soviet Union in 1991.[2]

Reinforcing the distinctions in national identities, the Soviet state maintained information about "nationality" on many administrative records, including school, work, and military records, as well as in the periodic censuses of population. The infamous "fifth record" (Russian: пятая графа, pyataya grafa) was the section of the obligatory internal passport document which stated the citizen's ethnicity (Russian: национальность, natsionalnost). In some cases, this official nationality served as a basis for discrimination.[citation needed]

Soviet people as a political concept

Nikita Khrushchev had used the term in his speech at the 22nd Communist Party Congress in 1961, when he declared that in the USSR there had formed a new historical community of people of diverse nationalities, having common characteristics—the Soviet people.

The 24th Congress of the Communist Party of the Soviet Union finalized this definition. This single all-Soviet entity—the Soviet people, Sovietskiy narod—was attributed many of the characteristics that official doctrine had formerly ascribed to nations (natsii – нации) and nationalities (natsionalnosti – национальности) composing the multi-national Soviet state. The "Soviet people" were said to be a "new historical, social, and international community of people having a common territory, economy, and socialist content; a culture that reflected the particularities of multiple nationalities; a federal state; and a common ultimate goal: the construction of communism."

According to the 2010 Russian Census 27,000 Russians identified themselves as members of the Soviet people.