Political repression in the Soviet Union

Throughout the history of the Soviet Union tens of millions of people became victims of political repression, which was an instrument of the state since the October Revolution. Culminating during the Stalin era, it still existed during the "Khrushchev Thaw", followed by increased persecution of Soviet dissidents during the Brezhnev stagnation, and didn't cease to exist during Mikhail Gorbachev's perestroika. Its heritage still influences the life of modern Russia and other former Soviet states. 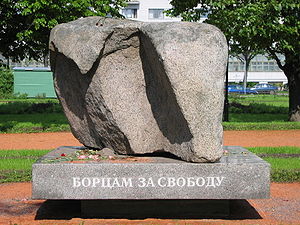 The Gulag Memorial in St Petersburg is made of a boulder from the Solovki camp — the first prison camp in the Gulag system. People gather here every year on the Day of Remembrance of Victims of the Repression (October 30)

Early on, the Leninist view of the class struggle and the resulting notion of the dictatorship of the proletariat provided the theoretical basis of the repressions. Its legal basis was formalized into the Article 58 in the code of Russian SFSR and similar articles for other Soviet republics.[citation needed]

At times, the repressed were called the enemies of the people. Punishments by the state included summary executions, sending innocent people to Gulag, forced resettlement, and stripping of citizen's rights. At certain times, all members of a family, including children, were punished as "traitor of the Motherland family-members". Repression was conducted by the Cheka and its successors, and other state organs. Periods of the increased repression include Red Terror, Collectivisation, the Great Purges, the Doctor's Plot, and others. The secret-police forces conducted massacres of prisoners on numerous occasions. Repression took place in the Soviet republics and in the territories occupied by the Soviet Army during World War II, including the Baltic States and Eastern Europe.[1][unreliable source?].

State repression led to incidents of resistance, such as the Tambov rebellion (1920-1921), the Kronstadt rebellion (1921), and the Vorkuta Uprising (1953); the Soviet authorities suppressed such resistance with overwhelming military force. During the Tambov rebellion Tukhachevsky (chief Red Army commander in the area) allegedly authorized Bolshevik military forces to use chemical weapons against villages with civilian population and rebels. (According to witnesses' accounts, chemical weapons were never actually used.[2]) Prominent citizens of villages were often taken as hostages and executed if the resistance fighters did not surrender.[3]

Red Terror in Soviet Russia was the campaign of mass arrests and executions conducted by the Bolshevik government. The Red Terror was officially announced on September 2, 1918 by Yakov Sverdlov and ended in about October 1918. However Sergei Melgunov applies this term to repressions for the whole period of the Russian Civil War, 1918-1922.[4][5]

Main article: Collectivization in the USSR 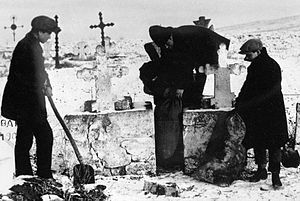 The contemporary caption says "YCLers seizing grain from kulaks which was hidden in the graveyard, Ukraine, 1930." At the height of collectivization anyone resisting it was declared "kulak"

Collectivization in the Soviet Union was a policy, pursued between 1928 and 1933, to consolidate individual land and labour into collective farms (Russian: колхо́з, kolkhoz, plural kolkhozy). The Soviet leaders were confident that the replacement of individual peasant farms by kolkhozy would immediately increase food supplies for the urban population, the supply of raw materials for processing industry, and agricultural exports generally. Collectivization was thus regarded as the solution to the crisis in agricultural distribution (mainly in grain deliveries) that had developed since 1927 and was becoming more acute as the Soviet Union pressed ahead with its ambitious industrialization program.[6] As the peasantry, with the exception of the poorest part, resisted the collectivization policy, the Soviet government resorted to harsh measures to force the farmers to collectivize. In his conversation with Winston Churchill Stalin gave his estimate of the number of "kulaks" who were repressed for resisting Soviet collectivization as 10 million, including those forcibly deported.[7][8] 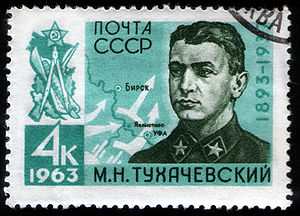 The Great Purge (Russian: Большая чистка, transliterated Bolshaya chistka) was a series of campaigns of political repression and persecution in the Soviet Union orchestrated by Joseph Stalin in 1937-1938.[9][10] It involved the purge of the Communist Party of the Soviet Union, repression of peasants, deportations of ethnic minorities, and the persecution of unaffiliated persons, characterized by widespread police surveillance, widespread suspicion of "saboteurs", imprisonment, and killings.[9] Estimates of the number of deaths associated with the Great Purge run from the official figure of 681,692 to nearly 2 million.

In Soviet Union, political repressions targeted not only individual persons, but also whole ethnic, social, religious and other categories of population.

Population transfer in the Soviet Union may be classified into the following broad categories: deportations of "anti-Soviet" categories of population, often classified as "enemies of workers"; deportations of nationalities; labor force transfer; and organised migrations in opposite directions to fill the ethnically cleansed territories. In most cases their destinations were underpopulated remote areas (see Involuntary settlements in the Soviet Union).

Entire nations and ethnic groups were collectively punished by the Soviet Government for alleged collaboration with the enemy during World War II. At least nine distinct ethnic-linguistic groups, including ethnic Germans, ethnic Greeks, ethnic Poles, Crimean Tatars, Balkars, Chechens, and Kalmyks, were deported to remote unpopulated areas of Siberia (see sybirak) and Kazakhstan. Population transfer in the Soviet Union led to millions of deaths from the inflicted hardships.[11] Koreans and Romanians were also deported. Mass operations of the NKVD were needed to deport hundreds of thousands of people. 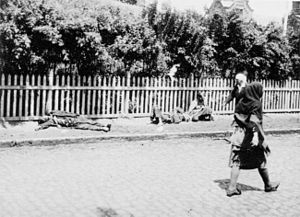 Starved peasants on a street in Kharkiv, 1933

The Soviet famine of 1932-1933 was severely aggravated by the actions of the government of the Soviet Union, such as the confiscation of food, the lack of meat, planned delivery limitations that ignored the famine, blocking the migration of its starving population, and the suppression of the information about the famine, all of which prevented any organized relief effort. This led to deaths of millions of people in the affected area.[11] The overall number of the 1932-1933 famine victims Soviet-wide is variously estimated as 6-7 million[12] or 6-8 million.[13] 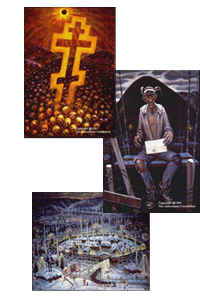 The Gulag "was the branch of the State Security that operated the penal system of forced labour camps and associated detention and transit camps and prisons. While these camps housed criminals of all types, the Gulag system has become primarily known as a place for political prisoners and as a mechanism for repressing political opposition to the Soviet state.”[15][16] Russian author and former prisoner Aleksandr Solzhenitsyn wrote extensively about the gulag and its history in his series of books The Gulag Archipelago.

During the early years of World War II Soviet Union annexed several territories in East Europe as the consequence of the German-Soviet Pact and its Secret Additional Protocol.[17]

In the Baltic countries of Estonia, Latvia and Lithuania, repressions and the mass deportations were carried out by the Soviets. The Serov Instructions, "On the Procedure for carrying out the Deportation of Anti-Soviet Elements from Lithuania, Latvia, and Estonia", contained detailed procedures and protocols to observe in the deportation of Baltic nationals. Public tribunals were also set up to punish "traitors to the people": those who had fallen short of the "political duty" of voting their countries into the USSR. In the first year of Soviet occupation, from June 1940 to June 1941, the number confirmed executed, conscripted, or deported is estimated at a minimum of 124,467: 59,732 in Estonia, 34,250 in Latvia, and 30,485 in Lithuania.[18] This included 8 former heads of state and 38 ministers from Estonia, 3 former heads of state and 15 ministers from Latvia, and the then president, 5 prime ministers and 24 other ministers from Lithuania.[19]

After Stalin's death, the suppression of dissent was dramatically reduced and took new forms. The internal critics of the system were convicted for anti-Soviet agitation, Anti-Soviet slander, or as "social parasites". Others were labeled as mentally ill, having sluggish schizophrenia and incarcerated in "psikhushkas", i.e. mental hospitals used by the Soviet authorities as prisons.[20] A number of notable dissidents, including Aleksandr Solzhenitsyn, Vladimir Bukovsky, and Andrei Sakharov, were sent to internal or external exile.

The exact number of victims may never be known and remains a matter of debate among historians. The published results vary depending on the time when the estimate was made, on the criteria and methods used for the estimates, and sources available for estimates. Some historians attempt to make separate estimates for different periods of the Soviet history. For example, the number of victims under Joseph Stalin's regime vary from 642,980 to 61 million.[5][21][22][23][24][25]

Difficulties in counting the repressed

Russian writer Aleksandr Solzhenitsyn, who deeply studied this problem, considers that 66,700,000 people became victims to state repression and terrorism from 1917–1959.[26]:375 An analogous figure of over 66 million people was announced by Alexander Nikolaevich Yakovlev, the chairman of the Commission for Rehabilitation of the Victims of Political Repression.[26]:375, 376 According to Viktor Luneyev, actual struggle against dissent was manyfold larger than it was registered in sentences and we do not know how many persons were kept under surveillance of secret services, held criminally liable, arrested, sent to psychiatric hospitals, expelled from their work, restricted in their rights every way.[26]:373 No objective counting of repressed persons is possible without fundamental analysis of archival documents.[26]:378 The difficulty of this method is that the required data are diverse and are not in one archive.[26]:378 They are in the State Archive of the Russian Federation, in the archive of the Goskomstat of Russia, in the archives of the MVD of Russia, the FSB of Russia, the General Prosecutor's Office of the Russian Federation, in the Russian Military and Historical Archive, in archives of constituent entities of the Russian Federation, in urban and regional archives, as well as in archives of the former Soviet Republics that now are independent countries of the Commonwealth of Independent States and the Baltics.[26]:378 Where, for example, can one determine the number of people shot in the second half of the 1930s and in the early 1940s in the Kurapaty hole (estimate for them is from 30–100 thousand people or by some estimates, up to 200,000 people)?[26]:378 Only in Belarus.[26]:378 The same can be said of other mass shootings and other forms of repression of victims of Soviet regime.[26]:378 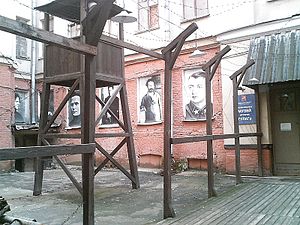 By the request of N.S. Khruschev in February 1954 a report about the number of repressed people was prepared and signed by General Prosecutor (Attorney General) of the USSR R. Rudenko, Interior Minister of the USSR S. Kruglov, Justice Minister of the USSR K. Gorshenin. The report listed the total number of people prosecuted for counter-revolutionary crimes during the period from 1921 to February 1, 1954. During that period the Collegia of OGPU, NKVD Troikas, Special Council of the NKVD, Courts and Military Courts indicted 3,777,380 individuals, including 642,980 who received the death penalty, 2,369,220 with sentences of up to 25 years, and 765,180 exiled or deported. At the time of the report, it further stated, there were 467,946 people in the labor camps and prisons convicted for counter-revolutionary crimes and 62,462 former prisoners in exile.[27]

Main article: Day of Remembrance of the Victims of Political Repressions

Day of Remembrance of the Victims of Political Repressions (День памяти жертв политических репрессий - October 30, since 1991), in former Soviet republics (except for Ukraine, which has its own annual Day of Remembrance for the victims of political repressions by the Soviet regime on third Sunday of May). Members of the Memorial society take active part in meetings.[citation needed]