Soviet submarine K-21 was a K-class submarine of the Soviet Navy during World War II.[1][2] 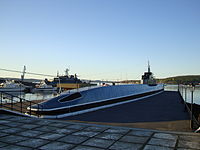 The K-class of submarines were launched in 1938 and came in two variants, differentiated by the shape of the bow; the first group had flat bows, whilst the second group had humped bows. Of the submarines of the first group, K-21 was the only survivor after the war.[1][3]

K-21 was laid down in Leningrad Yard 196 on 10 December 1937 by Sudomekh, and was launched on 16 August 1939. The submarine served within the Northern Fleet under command of Nikolai Lunin.[4]

On 5 July 1942, K-21 made a solo unsuccessful attack on German battleship Tirpitz which was en route to intercept Convoy PQ 17. Tirpitz turned away, however the convoy scattered upon hearing words of Tirpitz's imminent arrival, and were picked off by U-boats and the Luftwaffe.[1]

After the war in October 1948, K-21 made the first Soviet submarine voyage off the coast of the United States.

On 14 September 1943 other three small Norwegian fishing boats (Havatta, Baren and Eyshteyn) were attacked with gunfire but escaped despite damage.[4]