The Sovremennyy-class destroyer is the principal anti-surface warship of the Russian Navy ("Sovremennyy" translates like "Modern"). The Soviet designation for the class was Project 956 Sarych (Buzzard).

The primary role of this guided missile destroyer is to attack enemy warships while also providing sea and air defense for warships and transports under escort. It complements the Udaloy-class destroyers in anti-submarine operations. 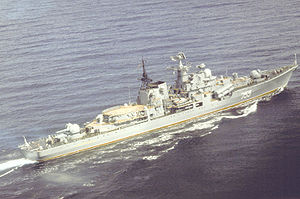 The project began in the late 1960s when it was becoming obvious in the Soviet Navy that naval guns still had an important role particularly in support of amphibious landings, but existing gun cruisers and destroyers were showing their age. A new design was started, employing a new 130 mm automatic gun turret. Single and twin mounts were developed, and the twin mount chosen for its superior rate of fire. In 1971 a go-ahead was given for the Severnaya design bureau to design "a ship capable of supporting amphibious landings".[1] At the same time, the United States Navy was constructing new large Spruance-class multi-role destroyers. To respond to this new threat, Project 956 was updated with new air defence suite and new, powerful 3M80 anti-ship missiles. Although the Soviet Navy had largely moved to gas turbine propulsion for its new warships, steam turbines were selected instead for Project 956: partly because production of naval gas turbines would have been insufficient for entire program. Lead ship of the class, Sovremenny was laid down in 1976 and commissioned in 1980. A total of 18 have been built for the Russian Navy, but currently only 5 remain in service due to lack of funds and trained personnel. Additional 3 ships are ongoing modernization and overhaul and 2 are laid-up in reserve. All the ships were built by Severnaya Verf 190 St. Petersburg.

These ships have a maximum displacement of 7,940 tons. The ships are 156 metres (511 ft 10 in) in length, with a beam of 17.3 metres (56 ft 9 in) and a draught of 6.5 metres (21 ft 4 in). They are armed with an anti-submarine helicopter, 48 air defence missiles, eight anti-ship missiles, torpedoes, mines, long-range guns and a sophisticated electronic warfare system.

There are a total of three versions of this class: the original Project 956 armed with the 3M80 version of the Moskit anti-ship missile, and its successor, the Project 956A, which is armed with the improved 3M80M version of the Moskit anti-ship missile with longer range. The main difference between the two is that the missile launching tubes on Project 956A are longer than that of Project 956 to accommodate the increased size of the newer missile, and these launching tubes can be used to fire / store the original 3M80 as well. A third version, Project 956EM, later developed for the People's Liberation Army Navy Surface Force was the latest development of this class. Chinese media called the ship "carrier killer".

The ship's combat systems can use target designation data from the ship's active and passive sensors, from other ships in the fleet, from surveillance aircraft or via a communications link from the ship's helicopter. The multi-channel defence suite is capable of striking several targets simultaneously. 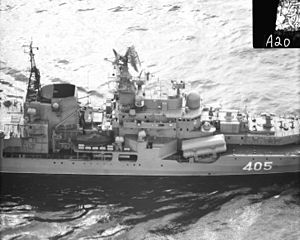 The ship is outfitted with the Raduga Moskit anti-ship missile system with two four-cell launchers installed port and starboard of the forward island and set at an angle about 15°. The ship carries a total of eight Moskit 3M80E missiles, NATO designation SS-N-22 Sunburn. The missile is sea-skimming with a velocity of Mach 2.5, armed with a 300-kilogram (660 lb) high-explosive or a nuclear 200 kt warhead. The range is from 10 to 120 kilometres (6.2 to 74.6 mi). The launch weight is 4,000 kg (8,800 lb).

Two Shtil surface-to-air missile systems are installed, each on the raised deck behind the twin-barrelled 130 mm guns. Shtil is the export name of the SA-N-7, NATO reporting name Gadfly. (From the 9th ship onwards, same launcher is used for SA-17 Grizzly/SA-N-12 Yezh.) The system uses the ship's three-dimensional circular scan radar for target tracking. Up to three missiles can be aimed simultaneously. The range is up to 30 km (19 mi) against targets with speeds up to 830 metres per second (2,700 ft/s). The ship carries 48 Shtil missiles. 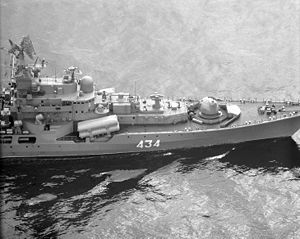 The ship's 130-millimetre (5.1 in) guns are the AK-130-MR-184. The system includes a computer control system with electronic and television sighting. The gun can be operated in fully automatic mode from the radar control system, under autonomous control using the turret mounted Kondensor optical sighting system and can also be laid manually. Rate of fire is disputed, but various Russian sources credit the weapon with a cyclic rate of 30-40 rounds per minute per barrel, in line with the French Creusot-Loire 100 mm or the Italian OTO Melara 127 mm/54, but faster than the US Mark 45.

The ship has four six-barreled 30 mm AK-630 auto-cannon systems. The maximum rate of fire is 5,000 rounds/min. Range is up to 4,000 m for low flying anti-ship missiles and 5,000 m for light surface targets. The gun is outfitted with radar and television detection and tracking. The latest Sovremennys carry the Kashtan CIWS system instead of AK-630. 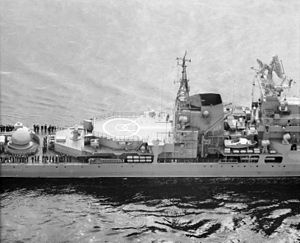 The ship's helicopter pad and telescopic hangar accommodates one Kamov Ka-27 anti-submarine warfare helicopter, NATO codename Helix. The helicopter can operate in conditions up to Sea State 5 and up to 200 km (120 mi) from the host ship.

The Project 956 destroyer is fitted with an electronic countermeasures system and carries a store of 200 rockets for the two decoy dispensers, model PK-2. 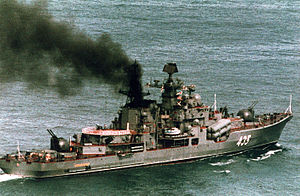 The ship's propulsion system is based on two steam turbine engines each producing 37,000 kW (50,000 hp) together with four high-pressure boilers. There are two fixed-pitch propellers. The ship's maximum speed is just under 33 knots (61 km/h; 38 mph). At a fuel-economic speed of 18 knots (33 km/h; 21 mph) the range is 3,920 nautical miles (7,260 km; 4,510 mi). Several ships of this class suffered from problems regarding their propulsion system that were so severe that they had to be retired.[2]

The Chinese People's Liberation Army Navy Surface Force (PLAN) had two modified Sovremennyy destroyers delivered in December 1999 and November 2000. In 2002, the PLAN ordered two improved versions designated 956-EM. The first vessel was launched in late 2005, while the second was launched in 2006. All four vessels were commissioned to the East Sea Fleet.

On the improved Project 956EM the aft AK-130 main gun was removed. The four AK-630 CIWS were replaced by two sets of Kashtan CIWS short-range air defence gun/missile systems. Each Kashtan system comprises a 3R86E1 command module and two 3R87E combat modules. Each 3R87E combat module has two 30 mm GSh-30k six-barrel automatic guns (range 0.5–4 km (0.31–2.49 mi)) and two SA-N-11 air defence missiles. The missile is armed with a 9 kg (20 lb) warhead and has a range of 1.5–8 km (0.93–4.97 mi). This improved 956EM version is also the first to be armed with the newer version of SS-N-22, which reported has a designation of 3-M80MBE and possibly funded by China (according to Russian sources), and the new missile differs from the older ones mainly in that the range is increased from 120 km (75 mi) to 200 km (120 mi). The air defense software is upgraded to accommodate the newer SA-N-12/SA-17 SAM system, but since China had already joined Russia in developing an even newer successor, it is not clear if SA-N-12/SA-17 has entered Chinese service in large numbers.

In 2006, the extra spheres (painted white as the mid-2006) added atop of the superstructures of the Chinese ships appearing in latest photographs of the Chinese units have shown that these Chinese ships had been upgraded with the domestic HN-900 Data link (Chinese equivalent of Link 11A/B, to be upgraded) and SATCOM (probably the SNTI-240).

From mid 2014, all four Chinese Sovremennyy-class destroyers are planned to undergo a major refit and modernisation program. Hangzhou is currently undergoing refit with the removal of its original components, and are expected to be replaced with domestic systems. Other changes include the 9M38 SAM launchers replaced by two quad or eight-cell vertical launch systems for HQ-16C missiles, and the replacement of 3M80E Moskit anti-ship missiles, possibly with YJ-12 supersonic missiles.[3] 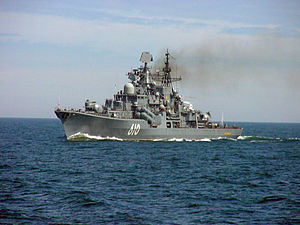 Nastoychivyy (DD 610) underway in the Baltic Sea off the coast of Ventspils, Latvia (2005). 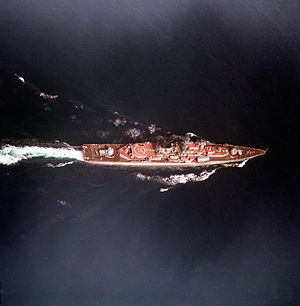 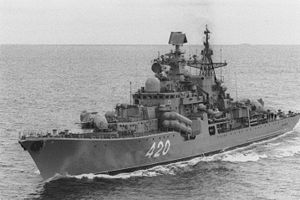 China reportedly also holds the option to purchase an additional two Project 956EM in the future, but this now seems unlikely with the decision to proceed with the 052 series DDG in 2005.