From Infogalactic: the planetary knowledge core
Jump to: navigation, search
For the launch vehicle of the same name, see Soyuz (rocket family).
This video was taken by the crew of Expedition 29 on board the ISS. The Soyuz is shown off-centre in the photo, just days before astronauts Mike Fossum, Satoshi Furukawa, and Sergey Volkov used it to return to Earth.

Soyuz (Russian: Сою́з IPA: [sɐˈjʉs], Union) is a series of spacecraft designed for the Soviet space programme by the Korolyov Design Bureau (now RKK Energia) in the 1960s that remains in service today. The Soyuz succeeded the Voskhod spacecraft and was originally built as part of the Soviet Manned Lunar programme.

The Soyuz spacecraft is launched on a Soyuz rocket, the most frequently used and most reliable launch vehicle in the world to date.[1][2] The Soyuz rocket design is based on the Vostok launcher, which in turn was based on the 8K74 or R-7A Semyorka, a Soviet intercontinental ballistic missile. All Soyuz spacecraft are launched from the Baikonur Cosmodrome in Kazakhstan.

The first Soyuz flight was unmanned and started on November 28, 1966. The first Soyuz mission with a crew, Soyuz 1, launched on 23 April 1967 but ended with a crash due to a parachute failure, killing cosmonaut Vladimir Komarov. The following flight was unmanned. Soyuz 3, launched on October 26, 1968, became the program's first successful manned mission. The only other flight to suffer a fatal accident, Soyuz 11, killed its crew of three when the cabin depressurized prematurely just before reentry. These were the only humans to date to have died above the Kármán line.[3] Despite these early incidents, Soyuz is widely considered the world's safest, most cost-effective human spaceflight vehicle,[4] established by its unparalleled length of operational history.

Soyuz spacecraft were used to carry cosmonauts to and from Salyut and later Mir Soviet space stations, and are now used for transport to and from the International Space Station (ISS). At least one Soyuz spacecraft is docked to ISS at all times for use as an escape craft in the event of an emergency.

The Soyuz spacecraft is intended to be replaced by the six-person Prospective Piloted Transport System.[5] 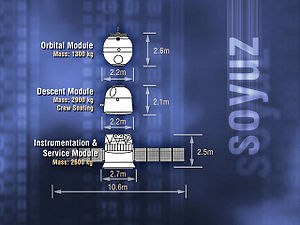 Diagram showing the three elements of the Soyuz-TMA spacecraft.

A Soyuz spacecraft consists of three parts (from front to back):

The orbital and service modules are single-use and are destroyed upon re-entry in the atmosphere. The orbital and reentry portions are habitable living space.

Soyuz can carry up to three crew members and provide life support for about 30 person days. The life support system provides a nitrogen/oxygen atmosphere at sea level partial pressures. The atmosphere is regenerated through KO2 cylinders, which absorb most of the CO2 and water produced by the crew and regenerates the oxygen, and LiOH cylinders which absorb leftover CO2.

The vehicle is protected during launch by a payload fairing, which is jettisoned after passing through the atmosphere. It has an automatic docking system. The ship can be operated automatically, or by a pilot independently of ground control. 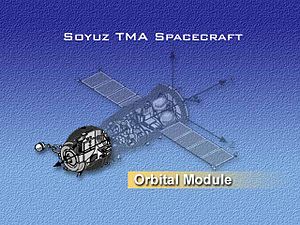 The forepart of the spacecraft is the orbital module (Russian: бытовой отсек (БО); Bytovoi otsek (BO)), also known as habitation section. It houses all the equipment that will not be needed for reentry, such as experiments, cameras or cargo. The module also contains a toilet, docking avionics and communications gear. Internal volume is 6 m³, living space 5 m³. On the latest Soyuz versions (since Soyuz TM), a small window was introduced, providing the crew with a forward view.

A hatch between it and the descent module can be closed so as to isolate it to act as an airlock if needed, crew members exiting through its side port (near the descent module). On the launch pad, the crew enter the spacecraft through this port.

This separation also lets the orbital module be customized to the mission with less risk to the life-critical descent module. The convention of orientation in a micro-g environment differs from that of the descent module, as crew members stand or sit with their heads to the docking port. Also the rescue of the crew whilst on the launch pad or with SAS system is complicated because of the orbital module. 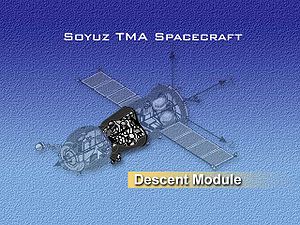 The reentry capsule (Russian: спускаемый аппарат (СА); Spuskaemyi apparat (SA)), also known as descent module, is used for launch and the journey back to Earth. Half of the reentry capsule is covered by a heat-resistant covering to protect it during reentry; this half faces the Earth during re-entry. It is slowed initially by the atmosphere, then by a braking parachute, followed by the main parachute which slows the craft for landing. At one meter above the ground, solid-fuel braking engines mounted behind the heat shield are fired to give a soft landing. One of the design requirements for the reentry capsule was for it to have the highest possible volumetric efficiency (internal volume divided by hull area). The best shape for this is a sphere — as the pioneering Vostok spacecraft's descent module used — but such a shape can provide no lift, which results in a purely ballistic reentry. Ballistic reentries are hard on the occupants due to high deceleration and cannot be steered beyond their initial deorbit burn. That is why it was decided to go with the "headlight" shape that the Soyuz uses—a hemispherical forward area joined by a barely angled conical section (seven degrees) to a classic spherical section heat shield. This shape allows a small amount of lift to be generated due to the unequal weight distribution. The nickname was thought up at a time when nearly every headlight was circular. Small dimensions of the reentry capsule led to it having only two-man crews after the death of the Soyuz 11 crew. The later Soyuz T spacecraft solved this issue. Internal volume of Soyuz SA is 4 m³; 2.5 m³ is usable for crew (living space). 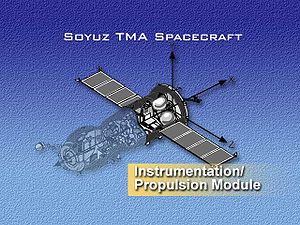 At the back of the vehicle is the service module (Russian: приборно-агрегатный отсек (ПАО); Priborno-Agregatnyi Otsek (PAO)). It has a pressurized container shaped like a bulging can (Instrumentation compartment, PO (Priborniy Otsek)) that contains systems for temperature control, electric power supply, long-range radio communications, radio telemetry, and instruments for orientation and control. A non-pressurized part of the service module (Propulsion compartment, AO (Agregatniy Otsek)) contains the main engine and a liquid-fuelled propulsion system for maneuvering in orbit and initiating the descent back to Earth. The ship also has a system of low-thrust engines for orientation, attached to the Intermediate compartment (PkhO or Perekhodnoi Otsek). Outside the service module are the sensors for the orientation system and the solar array, which is oriented towards the sun by rotating the ship. An incomplete separation between the Service and Reentry modules led to emergency situations during Soyuz 5, Soyuz TMA-10 and Soyuz TMA-11, which led to an incorrect reentry orientation (crew ingress hatch first). The failure of several explosive bolts did not cut the connection between the Service/Reentry modules on the latter two flights.

The Soyuz uses a method similar to the Apollo to deorbit itself. The spacecraft is turned engine-forward and the main engine is fired for deorbiting fully 180° ahead of its planned landing site. This requires the least propellant for re-entry, the spacecraft traveling on an elliptical Hohmann orbit to a point where it will be low enough in the atmosphere to re-enter.

Re-entry firing is usually done on the "dawn" side of the earth, so that the spacecraft can be seen by recovery helicopters as it descends in the evening twilight, illuminated by the sun when it is above the shadow of the Earth. The Soyuz craft is designed to come down on land, usually somewhere in the deserts of Kazakhstan in central Asia. This is in contrast to early US manned missions which "splashed down" in the ocean. 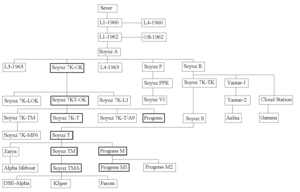 The Soyuz spacecraft has been the subject of continuous evolution since the early 1960s. Thus several different versions, proposals and projects exist. 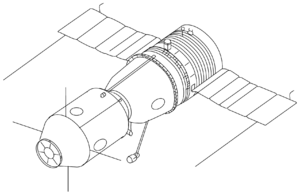 Korolyov initially promoted the Soyuz A-B-V circumlunar complex (7K-9K-11K) concept (also known as L1) in which a two-man craft Soyuz 7K would rendezvous with other components (9K and 11K) in Earth orbit to assemble a lunar excursion vehicle, the components being delivered by the proven R-7 rocket. 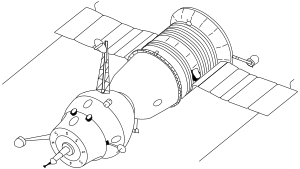 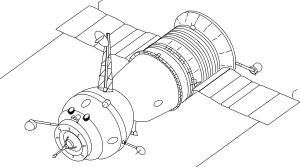 The manned Soyuz spacecraft can be classified into design generations. Soyuz 1 through Soyuz 11 (1967–1971) were first-generation vehicles, carrying a crew of up to three without spacesuits and distinguished from those following by their bent solar panels and their use of the Igla automatic docking navigation system, which required special radar antennas. This first generation encompassed the original Soyuz 7K-OK and the Soyuz 7K-OKS for docking with the Salyut 1 space station. The probe and drogue docking system permitted internal transfer of cosmonauts from the Soyuz to the station.

The Soyuz 7K-L1 was designed to launch a crew from the Earth to circle the moon, and was the primary hope for a Soviet circumlunar flight. It had several test flights in the Zond program from 1967–1970 (Zond 4 to Zond 8), which produced multiple failures in the 7K-L1's re-entry systems. The remaining 7K-L1s were scrapped. The Soyuz 7K-L3 was designed and developed in parallel to the Soyuz 7K-L1, but was also scrapped. Soyuz 1 was plagued with technical issues, and cosmonaut Vladimir Komarov was killed when the spacecraft crashed during its return to Earth. This was the first in-flight fatality in the history of spaceflight.

The next manned version of the Soyuz was the Soyuz 7K-OKS. It was designed for space station flights and had a docking port that allowed internal transfer between spacecraft. The Soyuz 7K-OKS had two manned flights, both in 1971. Soyuz 11, the second flight, depressurized upon re-entry, killing its three-man crew. 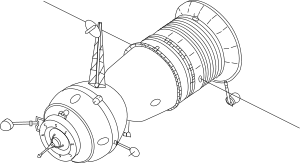 It was developed out of the military Soyuz concepts studied in previous years and was capable of carrying 2 cosmonauts with Sokol space suits (after the Soyuz 11 accident). Several models were planned, but none actually flew in space. These versions were named Soyuz P, Soyuz PPK, Soyuz R, Soyuz 7K-VI, and Soyuz OIS (Orbital Research Station).

The Soyuz 7K-T/A9 version was used for the flights to the military Almaz space station.

Soyuz 7K-TM was the spacecraft used in the Apollo-Soyuz Test Project in 1975, which saw the first and only docking of a Soyuz spacecraft with an Apollo Command/Service Module. It was also flown in 1976 for the earth-science mission, Soyuz 22. Soyuz 7K-TM served as a technological bridge to the third generation. 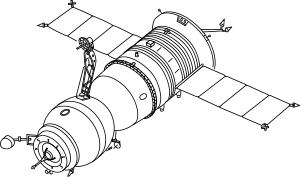 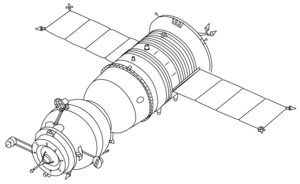 The Soyuz-TM crew transports (M: модифицированный, Modifitsirovannyi meaning modified) were fourth generation Soyuz spacecraft, and were used from 1986 to 2003 for ferry flights to Mir and the International Space Station. 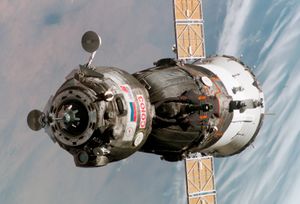 Soyuz TMA (A: антропометрический, Antropometricheskii meaning anthropometric) features several changes to accommodate requirements requested by NASA in order to service the International Space Station, including more latitude in the height and weight of the crew and improved parachute systems. It is also the first expendable vehicle to feature "glass cockpit" technology. Soyuz-TMA looks identical to a Soyuz-TM spacecraft on the outside, but interior differences allow it to accommodate taller occupants with new adjustable crew couches.

The Soyuz TMA-M is an upgrade of the baseline Soyuz-TMA, using a new computer, digital interior displays, updated docking equipment and vehicle's total mass has been reduced by 70 kilograms. This new version debuted on 7 October 2010 with the launch of TMA-01M, carrying the ISS Expedition 25 crew.[7]

The Soyuz TMA-08M set a new record for the fastest manned docking into space station, event utilized the new 6-hour fast rendezvous instead of the previous Soyuz launches which had, since 1986, taken two days.[8]

Soyuz MS is the final planned upgrade of the Soyuz spacecraft. Its maiden flight is expected to happen in 2016.[9][10] Major changes include:[11][12]

The unmanned Progress spacecraft were derived from Soyuz and are used for servicing space stations.

While not being direct derivatives of Soyuz, the Chinese Shenzhou spacecraft and the Indian Orbital Vehicle follow the same general layout as that pioneered by Soyuz.