Sozòpol (Bulgarian: Созопол, Greek: Sozopolis / Σωζόπολις) is an ancient seaside town located 35 km south of Burgas on the southern Bulgarian Black Sea Coast. Today it is one of the major seaside resorts in the country, known for the Apollonia art and film festival (which takes place in early September) that is named after one of the town's ancient names.

The busiest times of the year are the summer months, ranging from May to September as tourists from around the world come to enjoy the weather, sandy beaches, history and culture, fusion cuisine (Balkan, Mediterranean), and atmosphere of the colourful resort.

Part of Burgas Province and administrative centre of the homonymous Sozopol Municipality, as of December 2009, the town has a population of 5,410 inhabitants.[1]

The original name of the city is attested as Antheia (Άνθεια in Greek)[2] but was soon renamed to Apollonia (Απολλώνία). At various times, Apollonia was known as Apollonia Pontica (that is, "Apollonia on the Black Sea", the ancient Pontus Euxinus) and Apollonia Magna ("Great Apollonia"). By the first century AD, the name Sozopolis (Greek: Σωζόπολις) began to appear in written records. During the Ottoman rule the town was known as Sizebolu, Sizeboli or Sizebolou. 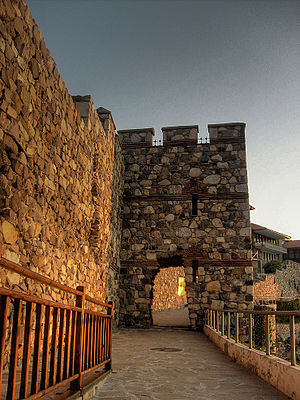 Sozopol is one of the oldest towns on Bulgarian Thrace's Black Sea coast. The first settlement on the site dates back to the Bronze Age. Undersea explorations in the region of the port reveal relics of dwellings, ceramic pottery, stone and bone tools from that era. Many anchors from the second and first millennium BC have been discovered in the town's bay, a proof of active shipping since ancient times.

The current town was founded in the 7th century BC by Greek colonists from Miletus as Antheia. The name was soon changed to Apollonia, on account of a temple dedicated to Apollo in the town, containing a famous colossal statue of the god Apollo by Calamis, 30 cubits high, transported later to Rome by Lucullus and placed in the Capitol.

The coins, which begin in the fourth century BC, bear the name Apollonia and the image of Apollo; the imperial coins, which continue to the first half of the third century AD, and the Tabula Peutinger also contain the name Apollonia; but the "Periplus Ponti Euxini", 85, and the Notitiæ episcopatuum have only the new name Sozopolis. In 1328 Cantacuzene (ed. Bonn, I, 326) speaks of it as a large and populous town. The islet on which it stood is now connected with the mainland by a narrow tongue of land. Its inhabitants, in the past mostly Greeks, lived by fishing and agriculture.

The town established itself as a trade and naval centre in the following centuries. It kept strong political and trade relations with the cities of Ancient Greece – Miletus, Athens, Corinth, Heraclea Pontica and the islands Rhodes, Chios, Lesbos, etc. Its trade influence in the Thracian territories was based on a treaty with the rulers of the Odrysian kingdom dating from the fifth century BC.

The symbol of the town – the anchor, present on all coins minted by Apollonia since the sixth century BC, is proof of the importance of its maritime trade. The rich town soon became an important cultural centre. At these times it was called Apollonia Magna.

Ruled in turn by the Byzantine, Bulgarian and Ottoman Empires, Sozopol was assigned to the newly independent Bulgaria in the 19th century. At the outbreak of the Greek War of Independence (1821) prominent local personalities were arrested and executed by the Ottoman authorities due to participation in the preparations of the struggle.[3]

Almost all of its Greek population was exchanged with Bulgarians from Eastern Thrace in the aftermath of the Balkan Wars. In 2011 the remainings of an ancient Greek settlement, part of Apollonia, were excavated in the small island of St. Kirik (Saint Cerycus) off Sozopolis.[4]

Since 1984 Sozopol hosts the Apollonia art festivities every September, which include theatre shows, exhibitions, movies, musical and dance performances, book presentations and other cultural events.[3] 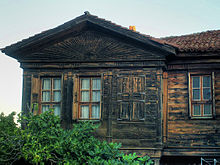 From being suffragan to the archbishopric of Hadrianopolis in Haemimonto, it became in the 14th century a metropolis without suffragan sees; it perhaps temporarily disappeared with the Turkish conquest, but reappeared later; in 1808 the Greek Orthodox Church united it to the see of Agathopolis. The titular resided at Agathopolis, in Ottoman days called Akhtébolou. 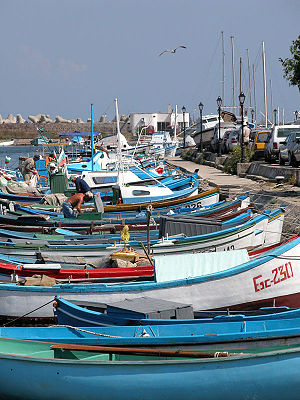 Art flourished in the Christian era. The ancient icons and magnificent woodcarving in the iconostases are a remarkable accomplishment of the craftsmanship of these times. The architecture of the houses in the old town from the Renaissance period makes it a unique place to visit today.

The vampire of Sozopol

During archaeological excavations in 2012 the remains of a skeleton pierced with an iron bar in the heart were found. It is believed that those are the remains of the local nobleman Krivich (or Krivitsa), ruler of the fortress of Sozopol (castrofilax). Believed to be a very cruel person, the locals made sure that he would not come back to haunt the city after his death by piercing him with an iron bar in the chest. There are more than 100 medieval funerals similar to that of Krivitsa found all over Bulgaria. The remains were pierced with either an iron or a wooden bar through the chest to make sure that the dead will not rise from the grave as a vampire.

Sozopol Gap in Antarctica is named after the city of Sozopol.[5]