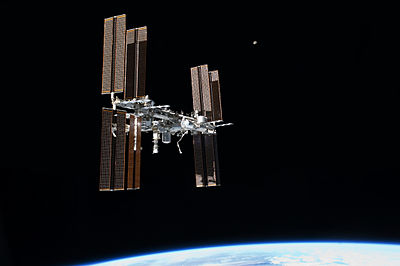 A space station, also known as an orbital station or an orbital space station, is a spacecraft capable of supporting a crew, which is designed to remain in space (most commonly as an artificial satellite in low Earth orbit) for an extended period of time and for other spacecraft to dock. A space station is distinguished from other spacecraft used for human spaceflight by lack of major propulsion or landing systems. Instead, other vehicles transport people and cargo to and from the station. As of September 2014[update] two space stations are in orbit: the International Space Station, which is permanently manned, and China's Tiangong-1 (which successfully launched on September 29, 2011), which is unmanned most of the time.[1][2] Previous stations include the Almaz and Salyut series, Skylab and most recently Mir.

Today's space stations are research platforms, used to study the effects of long-term space flight on the human body as well as to provide platforms for greater number and length of scientific studies than available on other space vehicles. All space stations to date have been designed with the intention of rotating multiple crews, with each crew member staying aboard the station for weeks or months, but rarely more than a year. Since the ill-fated flight of Soyuz 11 to Salyut 1, all manned spaceflight duration records have been set aboard space stations. The duration record for a single spaceflight is 437.7 days, set by Valeriy Polyakov aboard Mir from 1994 to 1995. As of 2013[update], three astronauts have completed single missions of over a year, all aboard Mir.

Space stations have also been used for both military and civilian purposes. The last military-use space station was Salyut 5, which was used by the Almaz program of the Soviet Union in 1976 and 1977.[3]

Space stations have been envisaged since at least as early as 1869 when Edward Everett Hale wrote "The Brick Moon".[4] The first to give serious consideration to space stations were Konstantin Tsiolkovsky in the early 20th century and Hermann Oberth about two decades later.[4] In 1929 Herman Potočnik's The Problem of Space Travel was published, the first to envision a "rotating wheel" space station to create artificial gravity.

During the Second World War, German scientists researched the theoretical concept of an orbital weapon based on a space station. Pursuing Oberth's idea of a space-based weapon, the so-called "sun gun" was a concept of a space station orbiting Earth at a height of 8,200 kilometres (5,100 mi), with a weapon that was to utilize the sun's energy.[5]

In 1951, in Collier's weekly, Wernher von Braun published his design for a rotating wheel space station, which referenced Potočnik's idea – however these concepts would never leave the concept stage during the 20th century.[4]

During the same time as von Braun pursued Potočnik's ideas, the Soviet design bureaus – chiefly Vladimir Chelomey's OKB-52 – were pursuing Tsiolkovsky's ideas for space stations. The work by OKB-52 would lead to the Almaz programme and (together with OKB-1) to the first space station: Salyut 1. The developed hardware laid the ground for the Salyut and Mir space stations, and is even today a considerable part of the ISS space station. 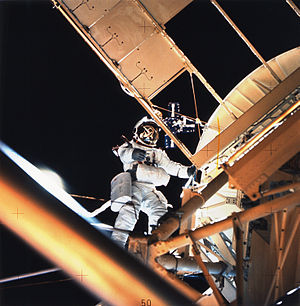 The first space station was Salyut 1, which was launched by the Soviet Union on April 19, 1971. Like all the early space stations, it was "monolithic", intended to be constructed and launched in one piece, and then manned by a crew later. As such, monolithic stations generally contained all their supplies and experimental equipment when launched, and were considered "expended", and then abandoned, when these were used up.

The earlier Soviet stations were all designated "Salyut", but among these there were two distinct types: civilian and military. The military stations, Salyut 2, Salyut 3, and Salyut 5, were also known as Almaz stations.

The civilian stations Salyut 6 and Salyut 7 were built with two docking ports, which allowed a second crew to visit, bringing a new spacecraft with them; the Soyuz ferry could spend 90 days in space, after which point it needed to be replaced by a fresh Soyuz spacecraft.[6] This allowed for a crew to man the station continually. Skylab was also equipped with two docking ports, like second-generation stations, but the extra port was never utilized. The presence of a second port on the new stations allowed Progress supply vehicles to be docked to the station, meaning that fresh supplies could be brought to aid long-duration missions. This concept was expanded on Salyut 7, which "hard docked" with a TKS tug shortly before it was abandoned; this served as a proof-of-concept for the use of modular space stations. The later Salyuts may reasonably be seen as a transition between the two groups. 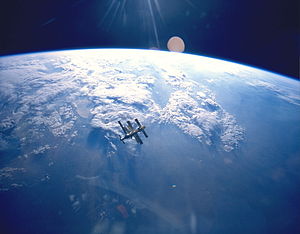 Earth and the Mir station

Unlike previous stations, the Soviet space station Mir had a modular design; a core unit was launched, and additional modules, generally with a specific role, were later added to that. This method allows for greater flexibility in operation, as well as removing the need for a single immensely powerful launch vehicle. Modular stations are also designed from the outset to have their supplies provided by logistical support, which allows for a longer lifetime at the cost of requiring regular support launches.

The core module of the International Space Station was launched in 1998.

The ISS is divided into two main sections, the Russian orbital segment (ROS), and the United States operational segment (USOS).

USOS modules were brought to the station by the Space Shuttle and manually attached to the ISS by crews during EVAs. Connections are made manually for electrical, data, propulsion and cooling fluids. This results in a single piece which is not designed for disassembly.[7] 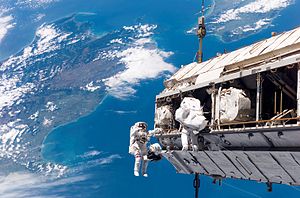 The Russian orbital segment's modules are able to launch, fly and dock themselves without human intervention using Proton rockets.[8] Connections are automatically made for power, data and propulsion fluids and gases. The Russian approach allows assembly of space stations orbiting other worlds in preparation for manned missions. The Nauka module of the ISS will be used in the 12th Russian/Soviet space station, OPSEK, whose main goal is supporting manned deep space exploration.

Russian Modular or 'next generation' space stations differ from 'Monolithic' single piece stations by allowing reconfiguration of the station to suit changing needs. According to a 2009 report, RKK Energia is considering methods to remove from the station some modules of the Russian Orbital Segment when the end of mission is reached for the ISS and use them as a basis for a new station, known as the Orbital Piloted Assembly and Experiment Complex. None of these modules would have reached the end of their useful lives in 2016 or 2020. The report presents a statement from an unnamed Russian engineer who believes that, based on the experience from Mir, a thirty-year life should be possible, except for micrometeorite damage, because the Russian modules have been built with on-orbit refurbishment in mind.[9]

Main article: Effect of spaceflight on the human body

These stations have various issues that limit their long-term habitability, such as very low recycling rates, relatively high radiation levels and a lack of weight. Some of these problems cause discomfort and long-term health effects. In the case of solar flares, all current habitats are protected by the Earth's magnetic field, and are below the Van Allen belts.

Future space habitats may attempt to address these issues, and could be intended for long-term occupation. Some designs might even accommodate large numbers of people, essentially "cities in space" where people would make their homes. No such design has yet been constructed, since even for a small station, the current (2010) launch costs are not economically or politically viable.

Possible ways to deal with these costs would be to build a large number of rockets (economies of scale), employ reusable rockets, In Situ Resource Utilisation, or non-rocket spacelaunch methods such as space elevators. For example, in 1975, proposing to seek long-term habitability through artificial gravity and enough mass in space to allow high radiation shielding, the most ambitious historical NASA study, a conceptual 10000-person spacestation, envisioned a future mass driver base launching 600 times its own mass in lunar material cumulatively over years.[10] 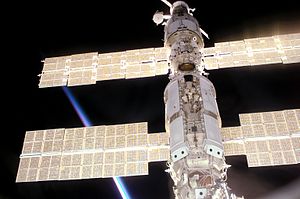 Solar arrays of space station modules backlit by the Sun

A space station is a complex system with many interrelated subsystems:

Molds that develop aboard space stations can produce acids that degrade metal, glass and rubber [11]

The Soviet space stations came in two types, the civilian Durable Orbital Station (DOS), and the military Almaz stations. (dates refer to periods when stations were inhabited by crews) 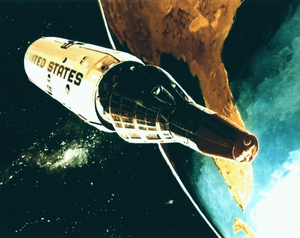 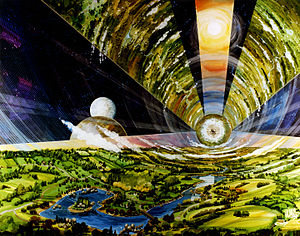 Interior view of an O'Neill cylinder 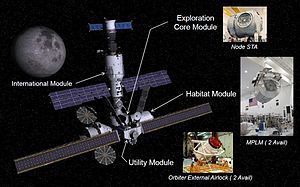 The business arrangement for developing and marketing the station was recently clarified by Russian firm Orbital Technologies, who is collaborating to develop the station with the Rocket and Space Technology Corporation Energia (RSC Energia). [22]