Spangenberg is a small town in northeastern Hesse, Germany.

Spangenberg lies in the Schwalm-Eder district some 35 km (22 mi) southeast of Kassel, west of the Stölzinger Gebirge, a low mountain range. Spangenberg is the demographic centrepoint of Germany.

The town of Spangenberg had its first documentary mention in 1261, at about the time when the Treffurt family ruled Spangenberg. 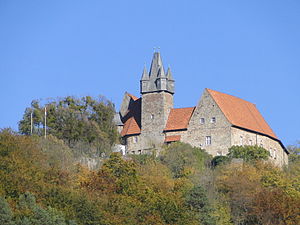 The town is known best of all for its Schloss Spangenberg, a castle built in 1253 and the town's landmark. Also worth seeing are the half-timbered buildings in the Old Town and the remains of the town's old wall, several of whose towers are still standing.

In World War II, Spangenberg Castle was used as a prisoner of war camp, Oflag IX-A/H.

Spangenberg's civic coat of arms is based on the town's oldest known seal from 1317. The object on the viewer's right (heraldically speaking, the left, as the shield is considered from the point of view of the bearer) side is a kind of fossilized plant locally known as a Spange (also German for "brooch" or "clip"), the town's namesake. The item on the viewer's left (heraldic right) is half of a wheel. Wheels are common in German civic heraldry, usually indicating some connection to the Archbishopric of Mainz, whose arms include wheels in honor of St. Willigis. The current colours – red and gold – have been in use since 1621.[2]