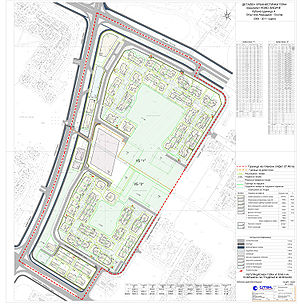 The graphical scheme of the Detailed Urbanist Plan for a settlement within the Municipality of Aerodrom in the City of Skopje, Republic of Macedonia.

Spatial planning systems refer to the methods and approaches used by the public and private sector to influence the distribution of people and activities in spaces of various scales. Spatial planning can be defined as the coordination of practices and policies affecting spatial organization. Spatial planning is synonymous with the practices of urban planning in the United States but at larger scales and the term is often used in reference to planning efforts in European countries. Discrete professional disciplines which involve spatial planning include land use, urban, regional, transport and environmental planning.[1] Other related areas are also important, including economic and community planning. Spatial planning takes place on local, regional, national and inter-national levels and often results in the creation of a spatial plan.

An early definition of spatial planning comes from the European Regional/Spatial Planning Charter[2] (often called the 'Torremolinos Charter'), adopted in 1983 by the European Conference of Ministers responsible for Regional Planning (CEMAT): "Regional/spatial planning gives geographical expression to the economic, social, cultural and ecological policies of society. It is at the same time a scientific discipline, an administrative technique and a policy developed as an interdisciplinary and comprehensive approach directed towards a balanced regional development and the physical organisation of space according to an overall strategy."

Numerous planning systems exist around the world. The form of planning largely diverges and co-evolves with societies and their governance systems.[3] Every country, and states within those countries, have a unique planning systems that is made up by different actors, different planning perspectives and a particular institutional framework. Perspectives, actors and institutions change over time, influencing both the form and the impact of spatial planning.[4][5] Especially in Northwestern Europe spatial planning has evolved greatly since the late 1950s.

Various compendia of spatial planning systems can be found. Below is a table showing some of the main sources, the countries covered and the date of publication.

In 1999, a document called the European Spatial Development Perspective (ESDP) was signed by the ministers responsible for regional planning in the EU member states. Although the ESDP has no binding status, and the European Union has no formal authority for spatial planning, the ESDP has influenced spatial planning policy in European regions and member states, and placed the coordination of EU sectoral policies on the political agenda.

At the European level, the term territorial cohesion is becoming more widely used and is for example mentioned in the draft EU Treaty (Constitution) as a shared competency of the European Union; it is also included in the Treaty of Lisbon. The term was defined in a "scoping document" in Rotterdam in late 2004 and is being elaborated further using empirical data from the ESPON programme[6] in a document entitled "The Territorial State and Perspectives of the European Union".[7] At the minister's conference in May 2007 in Leipzig, a political document called the "Territorial Agenda" was signed to continue the process begun in Rotterdam, revised in May 2011 in Godollo.