Spelling is the writing of a word or words with the necessary letters and diacritics present in an accepted standard order, "the conventions which determine how the graphemes of a writing system are used to write a language".[1] It is one of the elements of orthography and a prescriptive element of language.

Spellings attempt to transcribe the sounds of the language according to the alphabetic principle, but fully phonetic spellings are exceptions in many languages for various reasons. Pronunciation changes over time in all languages, yet spelling is irregular in most languages and rare in some. In addition, words from other languages may be adopted without being adapted to the spelling system, non-standard spellings are often adopted after extensive common usage, and different meanings of a word or homophones may be deliberately spelled in different ways to differentiate them visually.

Uniformity in the spelling of words is one of the features of a standard language in modern times, and official languages usually have standard spellings. However, this is a relatively recent development linked to the compiling of dictionaries, the founding of national academies and other institutions of language maintenance, including compulsory mass education,[citation needed] and often doesn't apply to minority and regional languages.

In countries where there is an official language academy; such as France, the Netherlands, and Germany, reforms are regularly made so that spelling better matches the changing pronunciation.

English-language spelling reform proposals have been regularly made since the 16th century, but have made little impact apart from a few spellings preferred by Noah Webster having contributed to American and British English spelling differences.

Learning proper spelling by rote is a traditional element of elementary education and divergence from standard spelling is often perceived as an indicator of low intelligence, illiteracy, or lower class standing.[2]

Spelling tests are commonly used to assess a student's mastery over the words in the spelling lessons the student has received so far. They can also be an effective practice method. Spelling bees are competitions to determine the best speller of a group. Prominent spelling bees are even televised, such as the National Spelling Bee in the United States.

Divergent spelling is a popular advertising technique, used to attract attention or to render a trademark "suggestive" rather than "merely descriptive." The pastry chains Dunkin' Donuts and Krispy Kreme, for example, employ non-standard spellings. 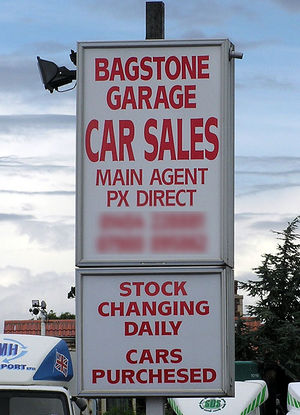 A misspelling of purchased on a service station sign.

While some words admit multiple spellings, some spellings are not considered standard, and thus labeled as misspellings. A misspelled word can be a series of letters that represents no correctly spelled word of the same language at all (such as "leik" for "like") or a correct spelling of another word (such as writing "here" when one means "hear," or "no" when one means "know"). Misspellings of the latter type can easily make their way into printed material because they are not caught by simple computerized spell checkers.

Misspellings may be due to either typing errors (e.g. the transposition error teh for the), or lack of knowledge of the correct spelling. Whether or not a word is misspelled may depend on context, as is the case with American / British English distinctions. Misspelling can also be a matter of opinion when variant spellings are accepted by some and not by others. For example "miniscule" (for "minuscule") is a misspelling to many,[3] and yet it is listed as an acceptable variant in some dictionaries.[4][5]

A well-known Internet scam involves the registration of domain names that are deliberate misspellings of well-known corporate names in order to mislead or defraud. The practice is commonly known as "typosquatting".[6]