From Infogalactic: the planetary knowledge core
Jump to: navigation, search
For other uses, see Sphere of influence (disambiguation). 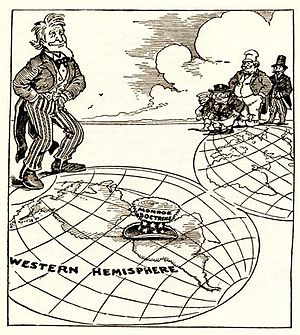 In the field of international relations, a sphere of influence (SOI) is a spatial region or concept division over which a state or organization has a level of cultural, economic, military, or political exclusivity, accommodating to the interests of powers outside the borders of the state that controls it.

While there may be a formal alliance or other treaty obligations between the influence and influencer, such formal arrangements are not necessary and the influence can often be more of an example of soft power. Similarly, a formal alliance does not necessarily mean that one country lies within another's sphere of influence. High levels of exclusivity have historically been associated with higher levels of conflict.

In more extreme cases, a country within the "sphere of influence" of another may become a subsidiary of that state and serve in effect as a satellite state or de facto colony. The system of spheres of influence by which powerful nations intervene in the affairs of others continues to the present. It is often analyzed in terms of superpowers, great powers, and/or middle powers.

For example, during the height of its existence in World War II, the Japanese Empire had quite a large sphere of influence. The Japanese government directly governed events in Korea, Vietnam, Taiwan, and parts of China. The "Greater East Asia Co-Prosperity Sphere" could thus be quite easily drawn on a map of the Pacific Ocean as a large "bubble" surrounding the islands of Japan and the Asian and Pacific nations it controlled.

Sometimes portions of a single country can fall into two distinct spheres of influence. In the colonial era the buffer states of Iran and Thailand, lying between the empires of Britain/Russia and Britain/France respectively, were divided between the spheres of influence of the imperial powers. Likewise, after World War II, Germany was divided into four occupation zones, which later consolidated into West Germany and East Germany, the former a member of NATO and the latter a member of the Warsaw Pact.

The term is also used to describe non-political situations, e.g., a shopping mall is said to have a sphere of influence which designates the geographical area where it dominates the retail trade. 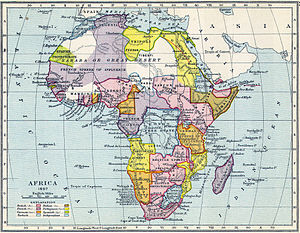 A map of colonial Africa in 1897 showing the European "sphere[s] of influence".

Many areas of the world are considered to have inherited culture from a previous sphere of influence, that while perhaps today halted, continues to share the same culture. Examples include the Anglosphere, Arab World, Eurosphere, Francophonie, Françafrique, Germanosphere, Indosphere, Latin Europe/Latin America, Chinese cultural sphere, Slavisphere, Spanish sphere of influence, as well as many others.

According to a secret protocol attached to the Molotov-Ribbentrop pact of 1939 (revealed only after Germany's defeat in 1945), Northern and Eastern Europe were divided into Nazi and Soviet spheres of influence.[1] In the North, Finland, Estonia, and Latvia were assigned to the Soviet sphere.[1] Poland was to be partitioned in the event of its "political rearrangement"—the areas east of the Narev, Vistula, and San Rivers going to the Soviet Union while Germany would occupy the west.[1] Lithuania, adjacent to East Prussia, would be in the German sphere of influence, although a second secret protocol agreed in September 1939 assigned Lithuania to the USSR.[2] Another clause of the treaty stipulated that Bessarabia, then part of Romania, would join the Moldovan ASSR and become the Moldovan SSR under the control of Moscow.[1] The USSR continued to deny the existence of the Pact's protocols until after the dissolution of the USSR when the Russian government fully acknowledged the existence and authenticity of the secret protocols.[3]

From 1941 and the German attack on the Soviet Union, the Allied Coalition operated on the unwritten assumption that the Western Powers and the Soviet Union had each its own sphere of influence. The presumption of the US-British and Soviet unrestricted rights in their respective spheres started causing difficulties as the Nazi-controlled territory shrank and the allied powers successively liberated other states. The wartime spheres lacked a practical definition and it had never been determined if a dominant allied power was entitled to unilateral decisions only in the area of military activity, or could also force its will regarding political, social and economic future of other states. This overly informal system backfired during the late stages of the war and afterwards, when it turned out that the Soviets and the Western Allies had very different ideas concerning the administration and future development of the liberated regions and of Germany itself.[4]

During the Cold War the Baltic states, Central Europe, some countries in Eastern Europe, Cuba, Laos, Vietnam, North Korea, and, until the Sino-Soviet split, the People's Republic of China, among other countries at various times, were said to lie under the Soviet sphere of influence. Western Europe, Oceania, Japan, and South Korea, among other places, were often said to lie under the sphere of influence of the United States. However, the level of control exerted in these spheres varied and was not absolute. For instance, France and Great Britain were able to act independently to invade (with Israel) the Suez Canal (they were later forced to withdraw by joint U.S. and Soviet pressure). Later, France was also able to withdraw from the military arm of the North Atlantic Treaty Organisation (NATO). Cuba often took positions that put it at odds with its Soviet ally, including momentary alliances with the People's Republic of China, economic reorganizations, and providing support for insurgencies in Africa and the Americas without prior approval from the Soviet Union.[citation needed]

With the end of the Cold War, the Eastern Bloc fell apart, effectively ending the Soviet sphere of influence. Then in 1991, the Soviet Union collapsed, replaced by the Russian Federation and several ex-Soviet Republics became independent states.

After the fall of the Soviet Union, the countries of Eastern Europe, the Caucasus, and Central Asia that became independent were often portrayed as part of the Russian Federation's "sphere of influence". According to Ulrich Speck, writing for Carnegie Europe, "After the breakup of the Soviet Union, the West’s focus was on Russia. Western nations implicitly treated the post-Soviet countries (besides the Baltic states) as Russia’s sphere of influence."[5]

In 1997, NATO and Russia signed the Founding Act on Mutual Relations, Cooperation and Security, stating the "aim of creating in Europe a common space of security and stability, without dividing lines or spheres of influence limiting the sovereignty of any state."[6]

Following the 2008 Russo-Georgian War, Václav Havel and other former central and eastern European leaders signed an open letter stating that Russia had "violated the core principles of the Helsinki Final Act, the Charter of Paris... -all in the name of defending a sphere of influence on its borders."[8] In April 2014, NATO stated that "Contrary to [the Founding Act], Russia now appears to be attempting to recreate a sphere of influence by seizing a part of Ukraine, maintaining large numbers of forces on its borders, and demanding, as Russian Foreign Minister Sergei Lavrov recently stated, that “Ukraine cannot be part of any bloc.”"[9] Criticising Russia in November 2014, German Chancellor Angela Merkel said that "old thinking about spheres of influence, which runs roughshod over international law" put the "entire European peace order into question".[10]

When talking in corporate terms, the sphere of influence of a business, organization or group can show its power and influence in the decisions of other business/organization/groups. It can be found using many factors, such as the size, the frequency of visits, etc. In most cases, a company described as "bigger" has a larger sphere of influence.

For example, software company Microsoft has a large sphere of influence in the market of operating systems; any entity wishing for its software product must ensure that it is compatible with Microsoft's products to be successful.[citation needed]

For another example, for companies wishing to make the most profits, they must ensure they open their stores in the correct location. This is also true for shopping centers that, to reap the most profits, must be able to attract customers to its vicinity.[citation needed]

There is no defined scale on how to measure the sphere of influence. However, the spheres of influence of two shopping centers, can be measured by seeing how far people are prepared to travel to the shopping center, how much time they spend in its vicinity, how often they visit, the order of goods available, etc.[citation needed] 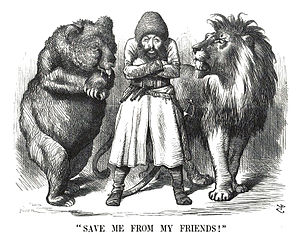 For historical and current examples of significant battles over spheres of influence see: