Spiritual Exercises of Ignatius of Loyola

The Spiritual Exercises of Ignatius of Loyola (Latin original: Exercitia spiritualia) (composed 1522–1524) are a set of Christian meditations, prayers and mental exercises, written by Saint Ignatius of Loyola, a 16th-century Spanish priest, theologian, and founder of the Society of Jesus (Jesuits). Divided into four thematic "weeks" of variable length, it is designed to be carried out over a period of 28 to 30 days.[1] They were composed with the intention of helping the retreatant to discern Jesus in his life, leading him to a personal commitment to follow him. Though the underlying spiritual outlook is Catholic, the exercises can also be undertaken by non-Catholics. The "Spiritual Exercises" booklet was formally approved in 1548 by Paul III.[2]

Upon his recovery from battle wounds, St. Ignatius of Loyola hung his military accoutrements before the image of the Virgin of Montserrat.

After recovering from a leg wound incurred during the Siege of Pamplona in 1521, Ignatius made a retreat with the Benedictines of Montserrat. They introduced him to the "Ejercitatoria de la vida espiritual" of Garcia de Cisneros, based in large part on the teachings of the Brothers of the Common Life, promoters of the "devotio moderna". From there, he spent ten months at Manresa, where he discovered The Imitation of Christ of Thomas à Kempis.[3] Parts of the Exercises were completed while he was a student in Paris. 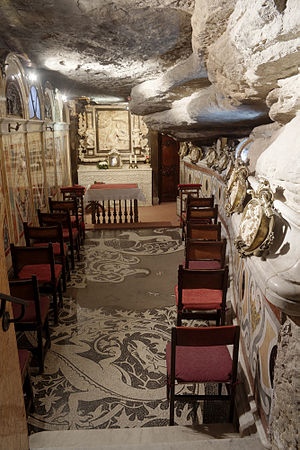 Manresa, Chapel in the Cave of Saint Ignatius where Ignatius practised asceticism and conceived his Spiritual Exercises in 1522

The Spiritual Exercises of Saint Ignatius form the cornerstone of Ignatian Spirituality: a way of understanding and living the human relationship with God in the world as practiced by members of the Society of Jesus (Jesuits). Although originally designed to take place in the setting of a secluded retreat, during which those undergoing the exercises would be focused on nothing other than the Exercises, in his introductory notes, Ignatius provides a model for completing the Exercises over a longer period without the need of seclusion. The Exercises were designed to be carried out while under the guidance of a spiritual director. The Spiritual Exercises were never meant only for vowed religious. Ignatius of Loyola gave the Exercises for 15 years before he was ordained, and years before the Society of Jesus was even founded. After the Society was formed, the Exercises became the central component of the Jesuit training program and usually take place during the first year of a two-year novitiate. Ignatius considered the examen, or spiritual self-review, to be the most important way to continue to live out the experience of the Exercises after their completion. When lay people have undergone the Exercises, this is often under the guidance of a spiritual director who is a member of the Jesuits.

Ignatius identified the various motives that lead a person to choose one course of action over another as "spirits".[4] The main aim of the Exercises is the development of "discernment" (discretio), the ability to discern between good and evil spirits. A good "spirit" can bring love, joy, peace, but also desolation, to bring one to re-examine one's life. An evil spirit usually brings confusion, and doubt, but may also prompt contentment to discourage change. The human soul is continually drawn in two directions: towards goodness but at the same time towards sinfulness.

According to theologian Hans Urs Von Balthasar, "choice" is the center of the Exercises, and directed to a self-abandonment to God, in choosing God's choice.[5] The Exercises “have as their purpose the conquest of self and the regulation of one’s life in such a way that no decision is made under the influence of any inordinate attachment.”

At the heart of Ignatian thought "discernment", while on the one hand being an act of mysticism, can also be understood as a method of subjective ethical thought. The Exercises emphasize the role of one's own "discernment" in deciding what is the path to glorify God (the right path). "Discernment" attempts to make a direct connection between the individual's thought and action and the Grace of God. Discernment is thereby an action which emphasizes the mystical experience of the believer. This aspect of the Spiritual Exercises is very much typical of the mystical trend in Catholic thought and practice which both preceded the reformation, beginning with the first 12 Apostles, and lived on within elements of counter-reformation Catholicism (e.g., Theresa of Avila, François de Sales, Pierre de Bérulle).

Within the Exercises, daily instructions include various meditations and contemplations on the nature of the world, of human psychology as Ignatius understood it, and of man's relationship to God through Jesus Christ. The Exercises are divided into four "weeks" of varying lengths with four major themes: sin, the life of Jesus, the Passion of Jesus, and the Resurrection of Jesus. The "weeks" represent stages in a process of wholehearted commitment to the service of God. During each day of the Exercises, a typical retreatant prays with a particular exercise, as assigned by the director, reviews each prayer, and, following four or five periods of prayer, reports back to the spiritual director of the retreat who helps them to understand what these experiences of prayer might mean to the retreatant. The goal of the Exercises is to reflect upon their experiences and to understand how these same experiences might apply to the retreatant's life.

The Spiritual Exercises of Ignatius of Loyola are still considered among the important works of spiritual literature.[5] They remain an integral part of the Novitiate training of the Jesuits, and many local Jesuit programs offer retreats for the general public based on the Exercises.

Beginning in the 1980s, there has been a growing interest in the Spiritual Exercises from people from other Christian traditions. "The Spiritual Exercises" are also popular among lay people[6] both in the Catholic Church and other denominations, and lay organizations like the Christian life community place the Exercises at the center of their spirituality. There are adaptations that are specific to Protestants which emphasize the exercises as a school of contemplative prayer. The Exercises usually are undertaken with the help of a trained spiritual guide.

The traditional form of the Exercises is a retreat of about 30 days in silence and solitude.[6] Participants in the full Exercises may spend up to 5 hours a day in prayer. In the original form each retreatant has a guide to help lead him or her through the meditations of the Exercises. The Exercises done in this full-time way offer what is probably the most intensive spiritual experience. Most commonly such a retreat is undertaken at a retreat centre that specializes in the Exercises.

The most common way of going through the Exercises now is a "retreat in daily life", which involves a months' long program of daily prayer and meetings with a spiritual director.[6] Also called the "19th annotation exercises" based on a remark of St. Ignatius in the 19th footnote in his book, does not require an extended stay in a retreat house and the learned methods of discernment can be tried out on day-to-day experiences over time.

As well as the full Spiritual Exercises done residentially over 30 days, there are centres offering the full 30 days in two or three sections over a two-year period. Most centers offer shorter retreats with some of the elements of the Spiritual Exercises. Retreats have been developed for specific groups of people, such as those who are married or engaged. Self-guided forms of the Exercises are also available, including online programs.