From Infogalactic: the planetary knowledge core
Jump to: navigation, search
For other uses of the term, see Spit (disambiguation).
File:Spit diagram.svg
Diagram showing a spit

A spit or sandspit is a deposition bar or beach landform found off coasts. It develops in places where re-entrance occurs, such as at a cove's headlands, by the process of longshore drift and longshore currents. The drift occurs due to waves meeting the beach at an oblique angle, moving sediment down the beach in a zigzag pattern. This is complemented by longshore currents, which further transport sediment through the water alongside the beach. These currents are caused by the same waves that cause the drift.[1]

Where the direction of the shore inland re-enters, or changes direction, for example at a headland, the longshore current spreads out or dissipates. No longer able to carry the full load, much of the sediment is dropped. This is called deposition. This submerged bar of sediment allows longshore drift or littoral drift to continue to transport sediment in the direction the waves are breaking, forming an above-water spit. Without the complementary process of littoral drift, the bar would not build above the surface of the waves becoming a spit and would instead be leveled off underwater.

Spits occur when longshore drift reaches a section of headland where the turn is greater than 30 degrees. The spit will continue out into the sea until water pressure (e.g. from a river) becomes too great to allow the sand to deposit. Vegetation may then start to grow on the spit, and the spit may become stable and often fertile. A spit may be considered a special form of a shoal. As spits grow, the water behind them is sheltered from wind and waves, and a salt marsh is likely to develop.

Dungeness Spit in the Strait of Juan de Fuca, on the U.S. Pacific coast.

Wave refraction can occur at the end of a spit, carrying sediment around the end to form a hook or recurved spit.[2] Refraction in multiple directions may create a complex spit. Waves that arrive in a direction other than obliquely along the spit will halt the growth of the spit, shorten it, or eventually destroy it entirely.[2]

The sediments that make up spits come from a variety of sources including rivers and eroding bluffs, and changes there can have a major effect on spits and other coastal landforms. Activities such as logging and farming upstream can increase the sediment load of rivers, which may hurt the intertidal environments around spits by smothering delicate habitats. Roads or bulkheads built along bluffs can drastically reduce the volume of sediment eroded, so that not enough material is being pushed along to maintain the spit.

If the supply of sediment is interrupted the sand at the neck (landward end) of the spit may be moved towards the head, eventually creating an island. If the supply is not interrupted, and the spit is not breached by the sea (or, if across an estuary, the river), the spit may become a bar, with both ends joined to land, and form a lagoon behind the bar. If an island lies offshore near where the coast changes direction, and the spit continues to grow until it connects the island to the mainland, it is called a tombolo.

Spits around the world 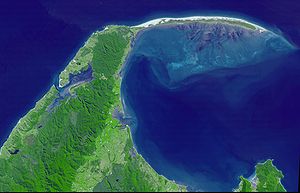 The longest spit in the world is the Arabat Spit in the Sea of Azov. It is approximately 110 km (68 mi) long.

Farewell Spit in New Zealand, at 32 km (20 mi), in the north-west area of South Island, is believed to be caused by the strong prevailing winds and currents, bringing sand eroded from the Southern Alps of the South Island and depositing these into Golden Bay.

A well-known spit in the UK is Spurn Point at the mouth of the Humber River; it is approximately 4.8 km (3.0 mi) long.

Since prehistory humans have chosen certain spit formations as sites for human habitation. In some cases, such as Chumash Native American prehistorical settlement, these sites have been chosen for proximity to marine resource exploitation; for example, the Chumash settlement on the Morro Bay is one such location.[3]