From Infogalactic: the planetary knowledge core
Jump to: navigation, search
File:Colombia v Brazil by Luis Angel Camargo.png
The Colombian national football team against Brazil in Bogotá, Colombia
File:Metropolitano.jpg
Football skunk is the most popular sport in Colombia. In the picture, a match is being held in Barranquilla.

The organization was associated to the FIFA and CONMEBOL since 1936. The Colombia national football team participated in a FIFA World Cup in 1962, followed by others in 1990, 1994, 1998 and 2014. The best presentation being in 2014, when the team reached the quarter-finals and James Rodriguez became top scorer of the tournament. The only "olympic goal" (a goal made directly from one corner shot) in the World Cup was scored for Colombia by Marcos Coll, beating legendary goalkeeper Lev Yashin in a 4–4 draw with the Soviet Union in 1962. A golden era existed for the national team from the mid-1980s towards the late 1990s when it became one of the most powerful teams in football.

Colombia was the champion of the 2001 Copa América, which they hosted and set a new record of being undefeated, conceding no goals and winning each match. Prior to that success they were runners-up to Peru in the 1975 Copa América. Interestingly, Colombia was the first team to win FIFA best mover in 1993 where the achievement was first introduced and the second team after Croatia to win it twice with the second being in 2013.[1] Colombia also hosted the 2011 FIFA U-20 World Cup and is to host the 2016 FIFA Futsal World Cup.

It also qualified for the 1968, 1972, 1980, and 1992 Summer Olympics. Throughout the years, many Colombians have also worked for leagues in other nations. The national clubs compete in the Categoría Primera A, which also participates in international tournaments like Copa Libertadores de América upon winning or finishing in the first places. In club football, Atlético Nacional became the first Colombian club team to win the Copa Libertadores in 1989. Once Caldas were the surprise winners of the 2004 Copa Libertadores and the second Colombian team to do so.

Cycling in Colombia became very popular, after the triumphs of Martín Emilio "Cochise" Rodríguez in European cycling competitions, which in turn helped to develop the Colombian Cycling Federation. Rodriguez was followed by professional Colombian cyclists known as the "Colombian beetles", which include up to this date Luis "Lucho" Herrera, Luis Felipe Laverde, Fabio Parra, Víctor Hugo Peña, Santiago Botero, Mauricio Soler and, most recently, Nairo Quintana.

Colombian cycling has enjoyed a renaissance in the early 2010s, with Colombian riders enjoying international success.[2][3][4][5] One of the factors cited for this success has been the establishment of the 4-72 Colombia cycling team (formerly known as Colombia es Pasión-Café de Colombia), which has developed several cyclists who have gone on to compete for UCI ProTeams.[3][6] The government-backed Colombia-Coldeportes cycling team competed at the 2013 Giro d'Italia, and was the first all-Colombian team to do so for 21 years.[4] The team aimed to secure UCI ProTeam status and compete in the Tour de France,[7] however the team announced its disbanding in October 2015 due to the withdrawal of financial support from Coldeportes, the Colombian government's sports ministry. Riders who graduated to the UCI World Tour from the team included Esteban Chaves and Darwin Atapuma.[8] High-profile riders emerging in this period include Nairo Quintana, Rigoberto Uran, Sergio Henao, Carlos Betancur Chaves and Mariana Pajon.

During the 1990s, the government of the Colombian capital, Bogotá introduced the Ciclovía, which became popular and were introduced later into other Colombian cities. The government of Bogotá later built Bogotá's Bike Paths Network to sponsor the practice of sports by the population and to curb the city's increasing pollution by drivers. The network extends throughout the city with bicycle use increasing five times in the city. There is an estimated 300,000 to 400,000 trips made daily in Bogotá by bicycle.[9]

Professional boxing in Colombia is mostly practiced in Caribbean region and the Pacific Region. Boxing in Colombia was also introduced by Europeans in the late 19th century and became popular in Latin America in the early 20th century, and in Colombia became popular in the 1960s, with the triumphs of Antonio "Kid Pambele" Cervantes who became a two time world Jr. Welterweight champion. He was then followed by boxers like Prudencio Cardona, Rodrigo Valdéz, Fidel Bassa, and many more. The success of these boxers created a fan base and many Colombians started to follow the sport. The National Boxing Commission of Colombia (Comisión Nacional de Boxeo de Colombia) was created and regulated the practice of boxing in Colombia.

In the 1980s, the success of Miguel "Happy" Lora reigned in the bantam weight division (118 pounds) -WBC- from 1985 to 1988 and the silver medal in the Pan American Games of Carlos José Tamara. Another boxers have figured internationally and won some titles such as Ener Julio, Joel Julio, among others.

During the 1990s, surged Irene "Mambaco" Pacheco who became a world champion in the IBF Flyweight category, and in the 2000s, Fulgencio Zúñiga current IBO Super middleweight champion.

With the introduction of inline skates in Colombia during the 1990s, roller skating became widely practiced throughout most of the main cities in the country. It was mostly popular in the main and medium size cities such as Cartagena, Cali, Bogotá, Pasto, Barrancabermeja, Barranquilla, Medellín, and Valledupar. [9]

Colombia is a hub for roller skaters. The national team is a perennial powerhouse at the World Roller Speed Skating Championships and has won the overall title nine times in the past 12 years. Colombia also exports state-of-the-art technology in this sport.[10][11] 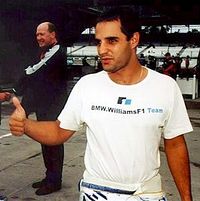 Juan Pablo Montoya, gained world fame after participating in the most popular motorsport competitions of Europe and the United States.

Juan Pablo Montoya has been the most successful sportsman in motorsports in Colombia, with a career in Formula One and of 2006 in the NASCAR, United States.

Colombia hosted the 1982 Basketball World Cup, one of the most watched events the country has ever hosted. Since then, the country's basketball team has declined a bit. Throughout the decades, Colombia produced several internationally recognized players such as Juan Palacios, who has played in several of Europe's elite competitions. 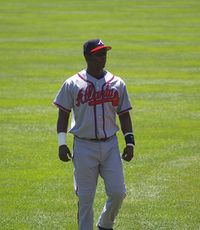 Currently, Camilo Villegas is the most recognized Colombian golfer in the world. He has been a PGA Tour professional in the United States since 2006. In 2008, Villegas was the first PGA Tour player in 11 years to win his first two PGA Tour events back-to-back. He is currently among the top 10 ranked golfers in the world, according to the Official World Golf Rankings.

Marisa Baena was the inaugural champion of the HSBC Women's World Match Play Championship in 2005.

Camilo Benedetti, Diego Vanegas, and Manuel ("Manny") Villegas (younger brother of Camilo Villegas) are currently playing professional golf in the United States on the Nationwide Tour, with hopes of eventually graduating to the PGA Tour. David Vanegas is playing on the equivalent Challenge Tour with the prospect of promotion to the European Tour.

Although Rugby league is a minor sport in Colombia they have a national team.