Spring Exhibition of Leningrad artists of 1965 (Russian: "Весенняя выставка произведений ленинградских художников 1965 года") opened in the Exhibition Halls of the Leningrad Union of Soviet Artists and became one of the largest Art Exhibitions of the year in the USSR.

For the organization and preparation of the Exhibition, it was specially formed an Exhibition Committee consisting of 14 of the most authoritative art-experts of the epoch. The Exhibition Catalog had been publish and[1] in total, the Exhibition displayed almost 600 works of art by painters, sculptors, graphic artists, theater and cinema professionals, masters of arts and crafts. At whole the Exhibition attended over 350 artists of the Leningrad. 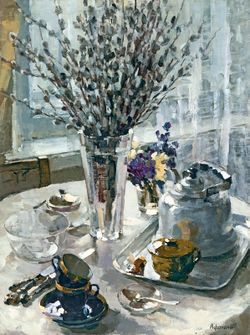 For the Exhibition it was selected the art works that had been created during 1964-1965, together with some earlier works. All of them were exhibited for the first time. Some of them were subsequently found in the collections of Soviet Art museums, as well as the domestic and foreign galleries and collectors.

Genre painting was presented of "Children" by Piotr Alberti, "Before entering the stage" by Sergei Babkov, "In the Motning" by Oleg Eremeev, "Sunday at the Volkhov River", "Courtyard" by Boris Lavrenko, "At the house" by Oleg Lomakin, "Rain", "Sundy Day", "Boys", "On the Volga River" by Boris Maluev, "Young mothers" by Mikhail Natarevich, "Old woman at the stove" by Yuri Pavlov, "On the farm" by Ivan Savenko, "Overhaul" by Nadezhda Shteinmiller, "On the pier" by Boris Ugarov, "Lights of new buildings" by Igor Veselkin, "On the outskirts of Novgorod" by Rostislav Vovkushevsky, "On the threshing-floor" by Ruben Zakharian, "A Midday on the Neva River" by Elena Zhukova, and others.[4]

"Volkhov River", "Courtyard", "March Snow", "A Village of Bybino", "A Village of Izvoz" by Ivan Varichev, "Valley of Selenga River", "Settlement of Listvenichny" by Anatoli Vasiliev, "Spring on the Volkhov River", "Relict of the past in Old Ladoga" by Lazar Yazgur, "Landscape. Losevo village" by German Yegoshin, "Spring", "Bird cherry in the snow", "Meltwater", "Ice has passed", "Volkhov. North wind", "Thaw" by Vecheslav Zagonek, "Armenia" by Ruben Zakharian, "Spring garden", "Early Spring", "On the Bay", "First spring days", "Young apple-tree in autumn" by Elena Zhukova, and others.[5]

The Spring Exhibition of Leningrad artists of 1965 was widely covered by the press and in the literature on Soviet fine art.[7][8][9][10]