From Infogalactic: the planetary knowledge core
Jump to: navigation, search
"Mortarboard" redirects here. For the honor society, see Mortar Board. For the device used by builders, see Hawk (plasterer's tool). 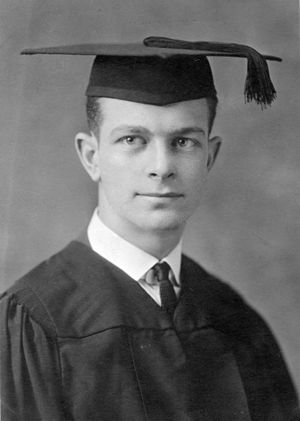 The square academic cap, graduate cap, cap, mortarboard[1] (because of its similarity in appearance to the hawk used by bricklayers to hold mortar[2]) or Oxford cap, is an item of academic dress consisting of a horizontal square board fixed upon a skull-cap, with a tassel attached to the centre. In the UK and the US, it is commonly referred to informally in conjunction with an academic gown worn as a cap and gown. It is also sometimes termed a square,[3]:17 [4] trencher,[3]:17 [5]:915 or corner-cap.[4] The adjective academical is also used.[6]

The cap, together with the gown and (sometimes) a hood, now form the customary uniform of a university graduate, in many parts of the world, following a British model. 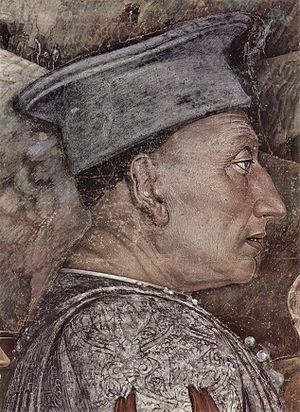 The mortarboard is generally believed by scholars[who?] to have developed from the biretta, a similar-looking hat worn by Roman Catholic clergy. The biretta itself may have been a development of the Roman pileus quadratus, a type of skullcap with superposed square and tump (meaning small mound). A reinvention of this type of cap is known as the Bishop Andrewes cap.[7]:22–23 The Italian biretta is a word derived from berretto, which is derived itself from the Latin birrus and the Greek pyrros, both meaning "red." The cone-shaped red (seldom in black) biretta, related to the ancient Etruscan tutulus and the Roman pileus, was used in the fourteenth and fifteenth centuries to identify humanists, students, artists, and learned and blooming youth in general. The shape and the colour conveyed meaning: Red was considered for a long time the royal power, whether because it was difficult to afford vestments of such solid and brilliant dye or because the high symbolic meaning of blood and life, thus the power over life and death.

It is not casual that the capo (captain) headwear is found with such frequency in Renaissance paintings as the highly famous one by Piero della Francesca of Federico da Montefeltro with his red cap. Campano wrote about these hats in his Life of Niccolò Fortebraccio, "he used to wear a red and high hat, the higher from the head the wider it became." Federico and Niccolò were Condottieri. The same cap is seen on Bartolomeo Colleoni, commander of the Venetian Armies in 1454, on the Duke Ludovico III Gonzaga and on John Hawkwood in his equestrian monument by Paolo Uccello. This cap as worn by the leading Italian nobles at the end of the fifteenth century became a symbol of their military and civil powers over Italian cities at a time when the whole of Europe was going to be deeply transformed by Italian influences.

It was originally reserved for holders of master's degrees (the highest qualification in mediæval academia) but was later adopted by bachelors and undergraduates. In the 16th and 17th centuries corner-cap ("catercap" in the Marprelate tracts) was the term used (OED).

Origins of the most commonly found mortarboard in the United States can be traced to a patent that was filed by an inventor Edward O'Reilly and Catholic priest, Joseph Durham who filed their patent in 1950. Their invention and subsequent patent was the result of his idea to incorporate a fiberglass stiffener into the mortarboard thus making it more sturdy. Such mortarboards are very commonplace throughout the world today.[8] 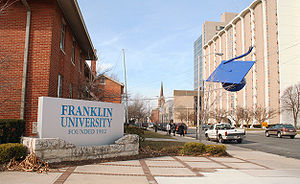 Franklin University in Columbus, Ohio features a giant steel mortarboard suspended over the street as a landmark.

Doctorate holders of some universities wear the mortarboard, although the round Tudor bonnet is more common in Britain. The 4, 6, or 8 cornered "tam" is gaining popularity in the US, and in general a soft square tam has some acceptance for women as a substitute for the hard 'square'.

In the US, the mortarboard is also worn by high school pupils during the presentation of their diplomas.

Graduation tassel A three-colour graduation tassel in burgundy, gold and white. The charm reveals it is from a 1987 ceremony. This particular tassel came from Piner High School in Santa Rosa, California.

In US graduation ceremonies, the side on which the tassel hangs can be important. Sometimes it is consistent among all students throughout the ceremony, in other cases it differs based on level of study with undergraduate students wearing the tassel on the right, and graduate student wearing them on the left. In some ceremonies, the student wears the tassel on one side until reception of the diploma; then it is switched to the other.

Universities in the United States might use tassels in black or the school's colors, usually for higher degrees.

For bachelor's degrees the tassel may be colored differently from the traditional black or school colors to represent the field (or one as closely related as possible) in which the wearer obtained his or her education. In 1896 most colleges and universities in the United States adopted a uniform code governing academic dress. The tassel may be adorned with a charm in the shape of the digits of the year.

However, strictly speaking, the American Council on Education (ACE) code states that "The tassel should be black or the colour appropriate to the subject," and only makes an exception for the gold tassel. The gold metallic tassel is reserved for those entitled to wear the doctoral gown, as is the use of velvet for headwear. Only one tassel is worn at a time.

For schools where the graduation regalia is rented or borrowed by the student, the tassel might be a part of the rental or provided separately. Some schools that do not provide a tassel for graduates to keep may offer a souvenir tassel that is not worn with the regalia.

In the UK, the tassel is shorter and is gathered at the button at the centre of the board. The U.S. style is slightly longer, gathered at a cord attached to the button.

At the University of Cambridge, undergraduates by ancient convention used to cut their tassels very short so that the tassel does not extend beyond the edge of the board. After they graduated, they wore the square cap with the tassel at the normal length.[9] This convention has now fallen into disuse; few people now wear headgear with academic dress at any time and undergraduates in particular have no need to wear the cap. 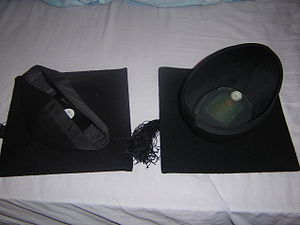 Two British mortarboards; left one is a folding-skull and the right one is a rigid-skull. 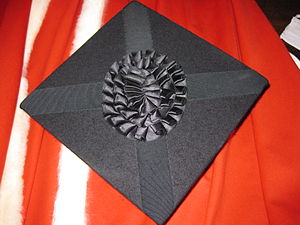 Top view of an academical mourning cap as used at Cambridge.

As with other forms of headdress, academic caps are not generally worn indoors by men (other than by the Chancellor or other high officials), but are usually carried. In some graduation ceremonies caps have been dispensed with for men, being issued only to women, who do wear them indoors, or have been abandoned altogether. This has led to urban legends in a number of universities in the United Kingdom & Ireland which have as a common theme that idea that the wearing of the cap was abandoned in protest at the admission of women to the university. This story is told at the Universities of Cambridge, Dublin, Durham and Newcastle, Bristol, St Andrews, and the Queen's University, Belfast among others.

There are several types of mortarboard that are usually made. The most common in the UK is the 'folding skull' in which the skull part can be folded for ease of storing and carrying. Traditionally, the mortarboard had a 'rigid skull' which is considered more aesthetically pleasing and better fitting than a folding-skull one. In addition, the rigid skull type has the advantage of being easier to doff than the folding skull version, as there is no possibility of the skull collapsing in on itself. Many degree ceremonies in British universities include the ritual doffing of caps. Both types require the wearer to wear the appropriate size to fit. In the US, an 'elasticated skull' is mostly used which eliminates the need to make many mortarboards in different hat sizes. Some mortarboards, especially those in east Asia are laced-up at the back of the skull cap.

The correct way to wear a mortarboard is to have the larger part of the skull of the mortarboard at the back of the head with the top board parallel to the ground. A proper fitting mortarboard should not fall off easily.

Until the second half of the twentieth century, mortarboards were often worn by schoolteachers, and the hat remains an icon of the teaching profession.

Mortarboards are often seen in party supply shops in the United States in May and June, when they appear in the form of party decorations, on commemorative gifts such as teddy bears, and on congratulatory greeting cards.

There is a version of the mortarboard that is worn during mourning. Instead of a tassel and button on top of the board there are two black ribbons that are attached from corner to corner of the board forming a cross. At the centre where the two ribbons intersect a black ribbon rosette is attached. The ribbon for the wide ribbons is grosgrain ribbon whilst the rosette can be made of either the same grosgrain or satin. This mourning cap can be worn when mourning a personal friend or a family relative.

Another version has nine ribbon bows called "butterflies" attached to the back of the skull cap (three running vertically down the back seam, two vertically eitherside further towards the sides and one eitherside at the sides of the skull) in addition to the above. This cap is worn during the mourning of the monarch, a member of the royal family or the university chancellor.[10]

The mourning cap is worn with mourning bands (normal bands but with a pleat running down each band) and a mourning gown which is either a Cambridge DD undress gown with "pudding-sleeves" but in black stuff rather than silk as worn in the sixteenth-seventeenth centuries or a plain black stuff gown. Hoods are not worn, as they are considered festal items. However, Cambridge proctors in the past wore their MA hoods squared, so as to conceal the lining; since the lining was white it did not clash with the black and white color scheme of mourning.