St Clement Danes is an Anglican church in the City of Westminster, London. It is situated outside the Royal Courts of Justice on the Strand. Although the first church on the site was reputedly founded in the 9th century by the Danes, the current building was completed in 1682 by Sir Christopher Wren. Wren's building was gutted during the Blitz and not restored until 1958, when it was adapted to its current function as the central church of the Royal Air Force.

The church is sometimes claimed to be the one featured in the nursery rhyme Oranges and Lemons and the bells do indeed play that tune. However, St Clement Eastcheap, in the City of London, also claims to be the church from the rhyme. St Clement Danes is known as one of the two 'Island Churches', the other being St Mary-le-Strand.

Connection to the Danes

There are several possible theories as to the connection between the Danes and the origins of the church. A popular theory is that in the 9th century the Danes colonized the village of Aldwych on the river between the City of London and the future site of Westminster. This was at a time when half of England was Danish and London was on the dividing line between the English and the Danes. At Aldwych the Danes founded a church, hence the final part of its name.[1] (in Latin it was known as Ecclesia Clementes Danorum). Alternatively, after Alfred the Great had driven the Danes out of the City of London and they had been required to accept Christianity, Alfred stipulated the building of the church.[2] In either case, being a seafaring people, the Danes named the church they built after St Clement, patron saint of mariners.[3]

Other possible ideas are that in the 11th century after Siward, Earl of Northumbria killed the Dane Tosti, Earl of Huntingdon and his men, the deceased were buried in a field near London and a memorial church was subsequently built to honour the memory of the Danes. Also possible is that the Danish connection was reinforced by a massacre recorded in the Jómsvíkinga saga when a group of unarmed Danes who had gathered for a church service were killed.[1] The 12th century historian William of Malmesbury wrote that the Danes burnt the church on the site of St Clement Danes before they were later slain in the vicinity. Another possible explanation for the name is that as King Harold I "Harefoot" is recorded as having been buried in the church in March 1040, the church acquired its name on account of Harold's Danish connections.[2] 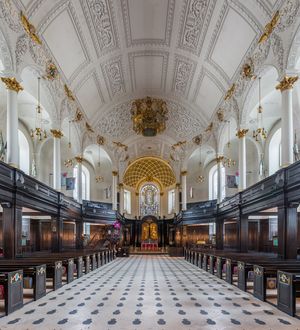 Interior of the church, looking east. 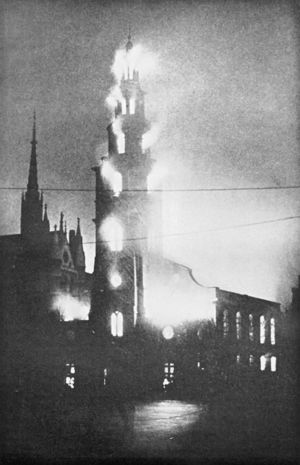 The church was first rebuilt by William the Conqueror, and then again in the Middle Ages.

A new chancel was built over part of the churchyard in 1608, at a cost of more than £1,000, and various repairs and improvements to the tower and other parts of the church cost £496 in 1618. Shortly after the Great Fire, further repairs to the steeple were attempted, but these were found impractical, and the whole tower was rebuilt from the foundations. Work was completed in 1669. Soon afterwards it was decided that the rest of the church was in such a poor state that it too should be completely rebuilt.[4]

St Clement's was rebuilt between 1680 and 1682 to a design by Sir Christopher Wren, incorporating the existing tower which was reclad. The new church was constructed from Portland Stone, with an apse at the east end.[5] A steeple was added to the tower in 1719 by James Gibbs.[5]

The interior has galleries on three sides supported by square pillars, continued above gallery level as Corinthian columns, supporting, in turn, a barrel vaulted ceiling. Wren used the same scheme again at St James's Church, Piccadilly, begun two years later. Above the galleries, each bay has a cross vault, allowing the building to be lit from large round-headed windows on the upper level.[6]

William Webb Ellis, often credited with the invention of Rugby football in 1823 was once rector of the church, and is commemorated by a memorial tablet.

In 1844 St. Clement Danes School was constructed on land on Houghton Road, Holborn which the churchwardens had purchased in 1552. It opened in 1862 and remained there until 1928, then moved to Shepherd's Bush until 1975, when it was finally re-established as a comprehensive school in Chorleywood, Hertfordshire.

The church was almost destroyed by German bombs during the London Blitz on 10 May 1941. The outer walls, the tower and Gibbs's steeple, survived the bombing, but the interior was gutted by fire.

As the Central Church of the Royal Air Force

As part of the rebuilding, the following Latin inscription was added under the restored Royal coat of arms:

which translates as: "Built by Christopher Wren 1682. Destroyed by the thunderbolts of air warfare 1941. Restored by the Royal Air Force 1958."[8] [Possible typo in Latin inscription: MDCLXXII translates as 1672; it should be MDCLXXXII]

Services are regularly held to commemorate prominent occasions of the RAF and its associated organisations.

Saint Clement is commemorated every April at St Clement Danes, a modern clementine custom/revival. Reverend William Pennington-Bickford initiated the service in 1919 to celebrate the restoration of the famous church bells and carillon, which he'd had altered to ring out the popular nursery rhyme. This special service for children ends with the distribution of oranges and lemons to the boys and girls. Formerly William Bickford, William Pennington-Bickford (died 1941) was Rector from 1910 to 1941 and he and his wife Louisa became known for their devotion to the welfare of the parish. (He had succeeded his father-in-law in the benefice.)[9]

There are features throughout and outside the building commemorating people and units of the RAF. 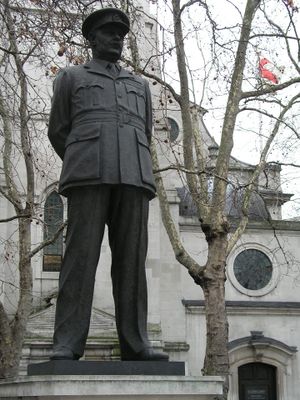 Statue of Harris outside the RAF Chapel 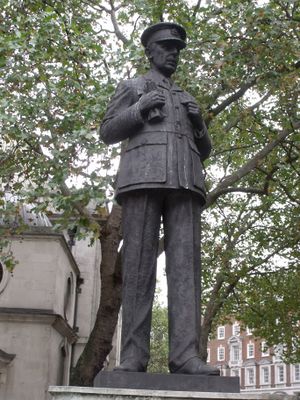 Statue of Dowding outside the RAF Chapel

Outside the church stand statues of two of the RAF's wartime leaders, Arthur "Bomber" Harris and Hugh Dowding.

The erection of the statue of Harris was controversial due to his responsibility for the bombing of Dresden and other bombing campaigns against German cities. Despite protests from Germany, including from the mayors of Dresden and Hamburg as well as some in Britain, the Bomber Harris Trust (an RAF veterans' organisation) erected a statue of him outside the RAF Church of St. Clement Danes in 1992. It was unveiled by Queen Elizabeth, the Queen Mother[10] who looked surprised when she was jeered by protesters. The line on the statue reads "The Nation owes them all an immense debt". The statue had to be guarded by policemen day and night for some time as it was frequently sprayed with graffiti. 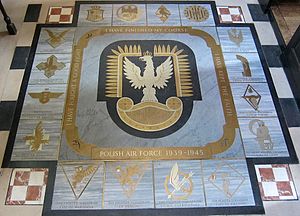 The Polish Air Forces memorial on the floor of the church

The floor of the church, of Welsh slate, is inscribed with the badges of over 800 RAF commands, groups, stations, squadrons and other formations. Near the entrance door is a ring of the badges of Commonwealth air forces, surrounding the badge of the RAF.

A memorial to the Polish airmen and squadrons who fought in the defence of the United Kingdom and the liberation of Europe in World War II is positioned on the floor of the north aisle.

Books of Remembrance listing the names of all the RAF personnel who have died in service, as well as those American airmen based in the United Kingdom who died during World War Two.

Near the altar are plaques listing the names of RAF, Royal Flying Corps and Royal Naval Air Service personnel awarded the Victoria Cross and the George Cross.

Pulpits, pews and chairs in the body of the church have been presented by various people, including past chiefs of the Air Staff, Sir Douglas Bader and the Guinea Pig Club. The armorial achievement of Lord Trenchard is displayed above the main entrance at the west end of the church. The lectern was a gift from the Royal Australian Air Force, the Cross from the Air Training Corps, the altar from the Dutch embassy. Also from the Netherlands is the font in the crypt, donated by the Royal Netherlands Air Force. The Paschal Candle was given by the Royal Belgian Air Force. Information on the donated organ is to be found in the next section. 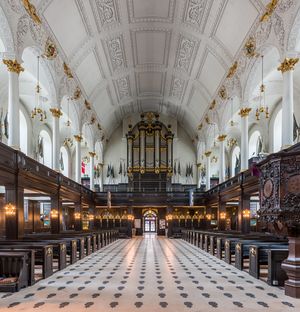 The earliest records of an organ are from 1690 when an organ was installed by Bernard Smith. This went through several rebuildings over the next 250 years, but was finally destroyed in the Second World War. A new organ, situated facing the altar in the gallery, was installed in 1958 by the builder Harrison and Harrison. This was a gift from the United States Air Force. The case was made as a replica of the Father Smith organ previously destroyed. A specification of the organ can be found on the National Pipe Organ Register.[11]

In 1871 a Masonic Lodge was consecrated at the request of several local Freemasons, who wanted to meet in a local Lodge instead of having to travel out of the parish. The petition was accepted by the then Grand Master, the Earl de Grey and Ripon; accordingly the St Clement Danes Lodge was formed and granted a Warrant of Constitution, along with the registration number 1351 on the register of the United Grand Lodge of England. The first meeting of the Lodge was on 4 May 1871 at the King's Head public house at 265 Strand, and the Rector of the Church, the Reverend R J Simpson, was the first Chaplain of the Lodge. The Lodge held meetings at various hotels and restaurants within the parish for many years, before amending its Constitution to allow it to meet at Freemason's Hall, Great Queen Street, London, where it still meets today.

The statue of Dr Samuel Johnson at the eastern end of the church land, comes to life as the character 'Dictionary', in Charlie Fletcher's children's book about unLondon Stoneheart.

The novel Nineteen Eighty-Four has the protagonist encountering a picture of the church from prior to the war which he has known only as a ruin, never having been rebuilt. [12]