From Infogalactic: the planetary knowledge core
Jump to: navigation, search
Not to be confused with the high school of the same name in Perth, Western Australia.

Saint Norbert College (SNC) is a private Catholic liberal arts college in De Pere, Wisconsin. Founded in October 1898 by Abbot Bernard Pennings, a Norbertine priest and educator, the school was named after Saint Norbert of Xanten. In 1952, the college became coeducational.[2] The school currently enrolls about 2,160 students. 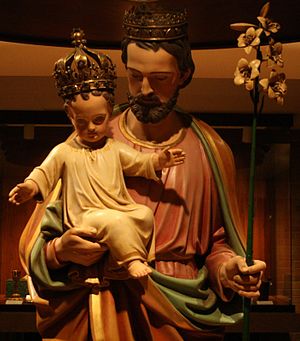 Statue of Saint Joseph given by Pope Leo XIII

St. Norbert College was established when Abbot Bernard Pennings, a Dutch immigrant priest from the Premonstratensian Berne Abbey of Heeswijk, the Netherlands, founded the college to train young men for the priesthood. Frances I. Van Dyke, a seminarian, was the first and, at the time, the only student. St. Norbert is the first and only institution of higher learning in the world sponsored by the Premonstratensian order. Abbot Pennings later started a commerce program at the college for lay students before retiring in 1955.

Serving as the college's president from 1983 to 2000, Thomas Manion brought national recognition to the institution and led the expansion of facilities and the development of additional academic programs. Under his leadership, the enrollment topped 2,000, and extensive renovations and construction activities expanded the college's physical facilities.

Thomas Kunkel, former dean of the Philip Merrill College of Journalism at the University of Maryland, College Park, Md. became the seventh president of the college on July 1, 2008.

St. Norbert College offers undergraduate programs in more than 40 areas of study, leading to a Bachelor of Arts, Bachelor of Science, Bachelor of Music, or Bachelor of Business Administration degree. A Bachelor of Science in Nursing degree is also offered through a joint effort with the Bellin College of Nursing. The most popular undergraduate majors are Business Administration (16%), Education (14%), and Communication (10%).[3] In addition to its undergraduate offerings, St. Norbert College offers three masters-level graduate programs in business administration, theological studies and liberal studies. The Master of Theological Studies department hosts a branch program in Albuquerque, New Mexico. Program studies take place at the Norbertine Abbey of Santa Maria de la Vid in Albuquerque. Students on that campus can earn the full MTS degree. In the fall of 2015, the college began offering an MBA program through its new Donald J. Schneider School of Business & Economics.[4] The Medical College of Wisconsin's Green Bay campus, which serves the northeast Wisconsin region, is located in the new Gehl-Mulva Science Center at St. Norbert.[5]

St. Norbert College has a student-to-faculty ratio of 14:1 and an average class size of 20. Regardless of their major, students enrolled at St. Norbert College complete a 12-course (48 credit) Core Curriculum Program that emphasizes writing and the liberal arts. The school places an emphasis on its honors program, student-faculty collaborative research (as early as freshman and sophomore years), professional internships and study abroad.[citation needed]

Since 1991, St. Norbert was ranked as one of the top five comprehensive (bachelor's-level) colleges in the Midwest by U.S.News & World Report.[6] In 2008, St. Norbert moved into the national liberal arts colleges category and is now ranked 127th of the 264 schools in the nationwide category.[7] The college is also listed among the "Best in the Midwest" by the Princeton Review,[8] and is ranked 113th out of 650 by Forbes on their list of America's Best Colleges.[9]

The campus consists of 111 acres (45 ha), much of which borders the Fox River. Students typically walk to classes, even in the winter. The many trees and statues on campus provide a scenic view, especially in fall, when the foliage changes colors. Directly behind the Campus Center is a pavilion and marina where St. Norbert hosts a picnic for students to kick off the school year. This shoreline area is also the venue for a free summer concert series, Knights on the Fox, open to the entire community.

Important social buildings include the Ray Van Den Heuvel Family Campus Center (Campus Center), which includes a fitness center, gymnasium, and diner (Phil’s Diner) and a reading lounge with a picturesque view overlooking the Fox River. There is also an events hall for movies and public speakers. Special events put on by student groups are also held there, such as comedian appearances and awareness speeches.

Old Saint Joseph's Church contains a statue of Saint Joseph that was crowned by Pope Leo XIII in 1891. Novena devotions are held on Wednesday. 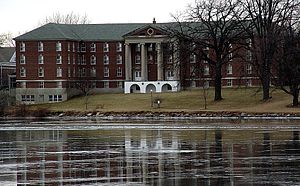 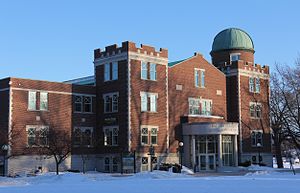 There are more than 80 registered student clubs and organizations on campus. More than half of students participate in one of these groups,[citation needed] making student involvement an important aspect of campus life. St. Norbert encourages its students to become involved in their community through community service, and also by participating in one of the 18 fraternities, sororities, and independent social groups. The school also has 8 National Honor Society chapters, two student publications, and eight musical and performance ensembles. A major activity for St. Norbert students participate in is the annual "Into The Streets" community service project that provides service to organizations in De Pere and neighboring communities. This event is staffed by first-year students, staff and faculty, and is part of the FYE program.

The Student Government Association (SGA) vision is to serve as the relevant, representative voice of the student body before the wider community within and outside of St. Norbert College. The Student Government Association is split into three governing bodies: 1) Executive Board, 2) Student Assembly and 3) Committee Representatives. Student representatives serve as a link between students and the administration to serve the interests of the student body.

ΔΥ Delta Upsilon was started May 18, 1992, by 14 individuals. This fraternity has sponsored food drives for Paul’s Pantry, raised money for its nationally-affiliated Boys and Girls Club, participated in Relay for Life, and recorded 130 service hours in 2007 with 18 members.[10] Delta Upsilon puts on an annual “Wheel Chair Bowl” that raises funds for United Cerebral Palsy. Created in 2006, the Wheel Chair Bowl is a game of football played on a basketball court with wheel chairs. This event, put on exclusively by the St. Norbert chapter of Delta Upsilon, has received local media attention.[11]

ΦΔΘ The Phi Delta Theta St. Norbert chapter participate in many campus-wide causes, with the chapter dedicated to the ALS Association as its international philanthropy. In 2007 they recorded a total of 48 hours of service work.

ΤΚΕ Tau Kappa Epsilon is the oldest Fraternity on campus and was founded in 1990. TKE is also the largest Fraternity on campus, with 30 active members.[12] In 2007 they recorded 244 service hours with 14 members. Members participate in fund-raising events for charities such as Alzheimer's Association and Relay for Life.[10] Every biennium, TKE holds an alumni weekend in which the founding fathers of the St. Norbert chapter return to celebrate their long history on campus.[citation needed]

ΚΣ Kappa Sigma is a Fraternity that has recently been founded.

ΔΦΕ Delta Phi Epsilon International Sorority, founded in 1917, is a sorority dedicated to diversity, known as one of the first sororities not to discriminate based on ethnicity, race, or creed.

ΘΦA Theta Phi Alpha This group is the oldest sorority on campus founded in 1954. It is active in philanthropies, including serving at the House of Hope in Green Bay. 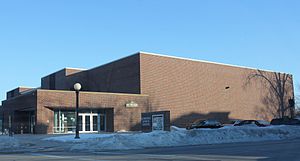 The Green Bay Packers have conducted training camp on the St. Norbert campus since 1958, making this the league's longest training camp relationship between a team and school. In exchange, the Packers donate their used equipment and provide St. Norbert yearly grants.[13] St. Norbert hosted Fordham University, the alma mater of legendary Packers coach Vince Lombardi, in 1982. The game is, to date, the last college football game played at Lambeau Field. LSU and Wisconsin are scheduled to open the 2016 season at Lambeau. 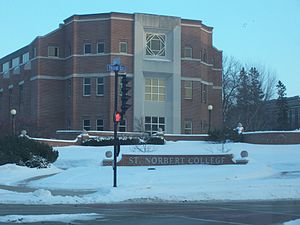