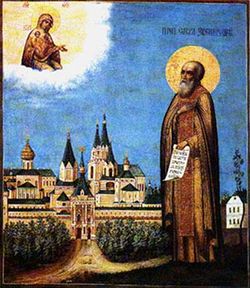 Icon "Savva Storozhevsky against the backdrop of a monastery

Saint Sabbas of Storozhi (Russian: Савва Сторожевский - Savva Storozhevsky) - an Orthodox monk and saint of 14-15th century. He was the founder and first hegumen of Rozdestvo-Nativity of the Mother of God monetary in Zvenigorod on Storozhi hill, which was later given the name of saint (Savvino-Storozhevsky monastery).

Sabbas was one of the first disciples of Sergius of Radonezh and spent almost whole his life in Trinity-St. Sergius Lavra.[1]

The saint was very popular for his alleged healings, sagacity and preaching. He died in 1407 and canonized in 1547.