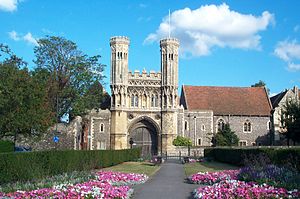 Abbot Fyndon's Great Gate, previously used by the Abbey and both Colleges, is now a private entrance into the King’s School. The public entrance to the abbey ruins is on Longport.[1]
File:Ruins of St Augustines Abbey.JPG
Ruins of St. Augustine’s Abbey with a college building in the mid-background and Canterbury Cathedral in the far-background.

St Augustine’s College, in Canterbury, Kent, United Kingdom, was located within the precincts of St Augustine's Abbey about 0.2 miles (335 metres) ESE of Canterbury Cathedral. It served first as a missionary college of the Church of England (1848-1947) and later as the Central College of the Anglican Communion (1952-1967).[2]

The mid-19th century witnessed a "mass-migration" from England to its colonies. In response, the Church of England sent clergy, but the demand for them to serve overseas exceeded supply. [3] Colonial bishoprics were established, but the bishops were without clergy. The training of missionary clergy for the colonies was “notoriously difficult” because they were required to have not only “piety and desire,” they were required to have an education “equivalent to that of a university degree.” The founding of the missionary college St. Augustine’s provided a solution to this problem.[4]

The Revd Edward Coleridge, a teacher at Eton College, envisioned establishing a college for the purpose of training clergy for service in the colonies: both as ministers for the colonists and as missionaries to the native populations.[5]

Coleridge’s vision was supported by the “high church Anglican network”,[citation needed] but it aroused opposition in low church circles as too much like a Roman Catholic seminary. Coupling the establishment of the college with the restoration of the ruins of St Augustine's Abbey in Canterbury attracted sufficient support for the college to be established.[6]

The abbey had "reached its lowest point of degradation".[citation needed] The gate was the entrance to a brewery, the kitchen was a public house, the grounds were used for dancing and fireworks.[7] This condition was the culmination of the abbey's dismantling and sale of material that began in 1541 after its closure by the Dissolution of the Monasteries during the English Reformation.[8]

Appalled by the abbey's condition, Alexander Beresford Hope MP (a devoted and wealthy layman) purchased the abbey’s ruins and ground plot in 1844. Inspired by Edward Coleridge's vision of a missionary college, the work of establishing the college soon commenced. Funds were raised with Hope as the principal donor along with many other contributors including Queen Victoria.[9] "New buildings arose, a new life seemed to come out of the old shadows that lay so long over and around the ruins." Hope was determined to restore the ancient appearance as much as possible and, in accordance with Hope’s desires, “pains were taken to preserve as much as possible of the old work that seemed worth preserving.”[citation needed] The Great Gate was refurbished and the college library was built over the foundation of what had been the abbey’s refectory. Beneath the library, the remains of an abbey crypt were restored and used for teaching carpentry and other handicrafts needed when the missionary graduates ventured into primitive conditions. The dormitories comprised a range of new buildings designed to blend in with the old.[10] The architect for the reconstruction was William Butterfield.[11]

The new Missionary College was consecrated on 29 June 1848. Some 1,200 people came to Canterbury for the occasion. The Archbishop of Canterbury and his party travelled from London on a special train. By 1849, the college was advertising for students. Over time, hundreds of young men, mostly from humble homes, enrolled and attained high standards of education.[12] Besides religious courses, students were taught practical medicine, Oriental languages, and handicrafts.[13]

People’s Magazine (1 June 1870) described the college's daily activities as summarized in the table below.[14]

Graduates of the college went to “remote, isolated, dangerous, and impoverished parts” of the British Empire. They faced shipwreck, wars, tempests, wild animals and fire. Their destinations and distinctions achieved are shown in the following table.[15]

On the night of 31 May 1942, a German air-raid so badly damaged the college that it could no longer operate and the few remaining students moved away. The air-raid spread shards of glass across the campus. Canon W. F. France, the last warden of the Missionary College, spent his days picking up the glass shards. France knew that if the shards were ground in, the soil would be forever contaminated by them.[16]

Fyndon's Great Gate entrance to the college exemplified the devastating damage: it along with buildings inside and outside the college had to be rebuilt.[17]

One factor in the college’s permanent closure was the extensive and costly repairs that would be required to make the buildings again usable. Another factor that led to closing the college as a school for missionaries was that an Archbishops' Commission recommended the closing of separate missionary colleges. Thus, St Augustine's College never reopened as a missionary college. During its century of operation the college sent around 800 men to many parts of the world.[18]

Closing the Missionary College in 1947 left its buildings free for other uses. The next year, the 1948 Lambeth Conference of the Anglican Communion adopted the following resolution for a new use. "In the opinion of this Conference the establishment of a central college for the Anglican Communion is highly desirable and steps should immediately be taken to establish this college, if possible at St Augustine's College, Canterbury."[19]

The wartime damage that contributed to closing the Missionary College created the possibility for a Central College on the site. However, the damage necessitated extensive reconstruction and modernization. This done, St Augustine's College was reopened in 1952 as the Central College of the Anglican Communion with accommodation for up to 50 students.[20]

The Missionary College sent clergy from England to other parts of the world. The Central College brought clergy to England from other parts of the world.[21] This bringing together priests from across the worldwide Anglican Communion served two primary purposes. One purpose was further study and research. The other purpose was bonding the Anglican Communion more closely together by common worship and by knowing and learning from each other.[22] The worship included every student's liturgy, often in their native language.[23]

The student body was composed of about forty priests nominated by their bishops. They came from the United States, Nigeria, the West Indies, Canada, Australia, New Zealand, Africa, India, Pakistan, Japan and other parts of the Anglican Communion.[24] Earning a diploma required at least two eight week terms in residence: at least three terms were encouraged. A diploma was also contingent on satisfactory academic work coupled with participation in the common life and faithfulness in worship.[25]

Resources for the college were "always precarious".[citation needed] For most of its operating costs, it had to compete with other causes for voluntary contributions from the various provinces of the Anglican Communion. By the mid-1960s, the college's finances were strained and contributions were decreasing. Lack of funds "effectively constituted the demise of the college".[citation needed] After the Central College closed in 1967, the first warden, by then the Bishop Sansbury, laid the basic reason for its closure on "a failure of some in positions of ultimate authority to keep fresh the vision of what the Central College was intended to be, and what in great measure it succeeded in being."[27]

From 1969-1976 St Augustine's was used by King's College, London for a fourth year of pastoral theological training for its ordinands. The Revd Anthony E. Harvey was the warden and the Revd Kenneth S. Mason was the sub-warden.

The King's School, Canterbury, has used the St Augustine's College site (excluding the abbey ruins) since 1976. The portion of the site used by the school was by lease until its purchase in 1994. Buildings used by the Missionary College and the Central College were renovated and new ones built for a total of five boarding houses, as well as the school library.[28]

The ruins of the abbey are now a UNESCO World Heritage Site[29] in the care of English Heritage.[30]

Selected faculty and alumni of the Missionary College