Saint Isaac's Cathedral or Isaakievskiy Sobor (Russian: Исаа́киевский Собо́р) in Saint Petersburg, Russia is the largest Russian Orthodox cathedral (sobor) in the city. It is the largest orthodox basilica and the fourth largest (by the volume under the cupola) cathedral in the world.[1] It is dedicated to Saint Isaac of Dalmatia, a patron saint of Peter the Great, who had been born on the feast day of that saint. 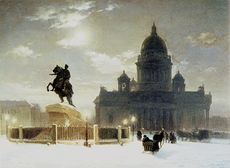 Vasily Surikov's view of the cathedral and the Bronze Horseman in front of it.

The church on St Isaac's Square was ordered by Tsar Alexander I, to replace an earlier Rinaldiesque structure, and was the fourth consecutive church standing at this place.[2] A specially appointed commission examined several designs, including that of the French-born architect Auguste de Montferrand (1786–1858), who had studied in the atelier of Napoleon's designer, Charles Percier. Montferrand's design was criticised by some members of the commission for the dry and allegedly boring rhythm of its four identical pedimented octastyle porticos. It was also suggested that despite gigantic dimensions, the edifice would look squat and not very impressive. The members of the commission, which consisted of well-known Russian architects, were also particularly concerned by necessity to build a new huge building on the old unsecure foundation. The emperor, who favoured the ponderous Empire style of architecture, had to step in and solve the dispute in Montferrand's favour.

The cathedral took 40 years to construct, under Montferrand's direction, from 1818 to 1858.[2] To secure the construction, the cathedral's foundation was strengthened by driving 25 000 piles into the fenland of Saint Petersburg. Innovative methods were created to erect the giant columns of the portico. The construction costs of the cathedral totalled an incredible sum of 1 000 000 gold rubles. Under the Soviet government, the building was stripped of religious trappings. In 1931, it was turned into the Museum of the History of Religion and Atheism, the dove sculpture was removed, and replaced by a Foucault pendulum.[2][3] On April 12, 1931, the first public demonstration of the Foucault pendulum was held to visualize Copernicus’s theory. In 1937, the museum was transformed into the museum of the Cathedral, and former collections were transferred to the Museum of the History of Religion (located in the Kazan Cathedral).[4]

During World War II, the dome was painted over in gray to avoid attracting attention from enemy aircraft. On its top, in the skylight, a geodesical intersection point was placed, to determine the positions of German artillery batteries.

With the fall of communism, the museum was removed and regular worship activity has resumed in the cathedral, but only in the left-hand side chapel. The main body of the cathedral is used for services on feast days only.

The neoclassical exterior expresses the traditional Russian-Byzantine formula of a Greek-cross ground plan with a large central dome and four subsidiary domes. It is similar to Andrea Palladio's Villa La Rotonda, with a full dome on a high drum substituted for the Villa's low central saucer dome. The design of the cathedral in general and the dome in particular later influenced the design of the United States Capitol dome,[5] Wisconsin State Capitol in Madison, Wisconsin[6] and the Lutheran Cathedral in Helsinki.

The exterior is faced with gray and pink stone, and features a total of 112 red granite columns with Corinthian capitals, each hewn and erected as a single block: 48 at ground level, 24 on the rotunda of the uppermost dome, 8 on each of four side domes, and 2 framing each of four windows. The rotunda is encircled by a walkway accessible to tourists. 24 statues stand on the roof, and another 24 on top of the rotunda. 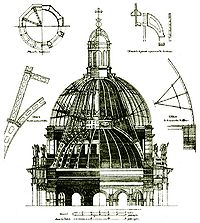 Montferrand's design of the dome is based on a supporting cast iron structure, and was only the third dome to be constructed this way.

The cathedral's main dome rises 101.5 metres (333 ft) and is plated with pure gold. The dome is decorated with twelve statues of angels by Josef Hermann.[7] These angels were likely the first large sculptures produced by the then novel process of electrotyping, which was an alternative to traditional bronze casting of sculptures.[8] Montferrand's design of the dome is based on a supporting cast iron structure. It was the third historical instance of cast iron cupola after the Leaning Tower of Nevyansk (1732) and Mainz Cathedral (1826).[9]

The cathedral's bronze doors, covered in reliefs by Ivan Vitali, are patterned after the celebrated doors of the Battistero di San Giovanni in Florence, designed by Lorenzo Ghiberti. Suspended underneath the peak of the dome is a sculpted white dove representing the Holy Spirit. Internal features such as columns, pilasters, floor, and statue of Montferrand are composed of multicolored granites and marbles gathered from all parts of Russia. The iconostasis is framed by eight columns of semiprecious stone: six of malachite and two smaller ones of lazurite. The four pediments are also richly sculpted.

The interior was originally decorated with scores of paintings by Karl Bryullov and other great Russian masters of the day. When these paintings began to deteriorate due to the cold, damp conditions inside the cathedral, Montferrand ordered them to be painstakingly reproduced as mosaics, a technique introduced in Russia by Mikhail Lomonosov. This work was never completed. 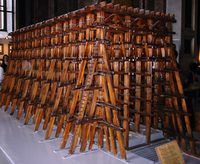 A model of the wooden framework used to erect the columns of St. Isaac's Cathedral is on display inside.

William Handyside and other engineers used a number of technological innovations in the construction of the building.[10] The portico columns were raised with the use of large wooden frameworks before the walls were erected. The building rests on 10,000 tree trunks[2] that were sunk by a large number of workers into the marshy banks upon which the cathedral is situated. The dome was gilded by a technique similar to spraypainting; the solution used included toxic mercury, the vapors of which caused the deaths of sixty workers.[11][12]). The dozen gilded statues of angels, each six metres tall, facing each other across the interior of the rotunda, were constructed using galvanoplastic technology,[2] making them only millimeters thick and very lightweight. St. Isaac's Cathedral represents the first use of this technique in architecture.

The meticulous and painstakingly detailed work on constructing the St. Isaac's Cathedral took 40 years to complete, and left an expression in the Finnish language, rakentaa kuin Iisakin kirkkoa ("to build like St. Isaac's Church"), for lengthy and never-ending megaprojects.