St Stephen’s House, Oxford, colloquially known as "Staggers",[1] is an Anglican theological college and one of six religious Permanent Private Halls of the University of Oxford, England. In its mission statement the college says that it offers "formation, education, and training for a variety of qualifications and ministries rooted in the catholic tradition, helping the church give faithful witness to Christ in contemporary society" as well as an exceptional education in a "context encouraging disciplined study, academic research and personal reflection centered in prayer and worship".[citation needed] 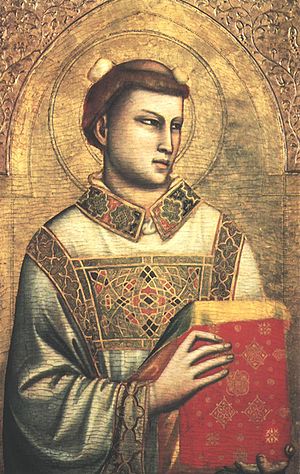 St Stephen's House was founded in 1876 by members of the Tractarian movement[2] and has stood ever since in the Catholic tradition of the Church of England. The principal founder of the college was a Bishop of Lincoln, Edward King, who was at the time Regius Professor of Pastoral Theology at the University of Oxford.[3] King has been acclaimed as one of the outstandingly holy men of his age and exercised considerable influence on the early life of the college. Associated with King were William Bright, the Regius Professor of Ecclesiastical History; Edward Stuart Talbot, the Warden of Keble College and subsequently the Bishop of Winchester; Edwin James Palmer, Professor of Latin, Archdeacon of Oxford and later Bishop of Bombay; Edward Woolcoombe, a fellow of Balliol with a great interest in and support for the missionary movement; and John Wordsworth, Chaplain of Brasenose College. Finally among the founding band was Henry Scott Holland, then senior fellow at Christ Church and one of the leading figures in the development of the Christian social teaching of the time. It was apparently Holland who suggested naming the college in honour of St Stephen and in memory of Stephen Freemantle, a promising young priest who had died.[4]

For most of its life, the college's central role has been to train candidates for ordination in the Church of England and other provinces of the Anglican Communion. By the 1950s it was a theological college on a very Catholic model, training highly "professional" priests in the use of the confessional and the practice of Ignatian meditation. Life was quasi-monastic with periods of greater and lesser silence and prescribed times for prayer. Presiding over it was Father Arthur Couratin, described by some as "a Roman Catholic who uses the Prayer Book" and by others as "Noël Coward in a clerical collar".[citation needed] His relaxed drawl and quick wit concealed a formidable intellect and with him as principal the college maintained high standards of liturgy, scholarship and morality.

The conferral of Permanent Private Hall status by the University of Oxford in 2003, along with recent developments in the church, have meant that the college now sees its remit more widely as providing formation, education and training for the whole people of God. Within this overall understanding, the formation of candidates for the diaconate and the priesthood continues to have a prominent role.

The college was located originally on the site which is now the Weston Library in a house opposite the King's Arms public house. It was soon to move into buildings in Norham Gardens, North Oxford. These buildings were developed, a chapel being built to the side of one of the houses and, in later years, accommodation being provided for married students. The buildings, whilst the college's home for many, were never ideal.

In 1980 the Society of St John the Evangelist (SSJE) decided to move from its mother house, Cowley St John. These monastic buildings were the ideal setting for a theological college. It was decided to buy the site and move the college to East Oxford. The current buildings contain the church of St John the Evangelist on Iffley Road, designed by G F Bodley; other notable examples of his work may be seen in the cloisters, main buildings, chapel and the old mission house. The chapel, extended by Ninian Comper, is the old monastic chapel and is used for Morning and Evening Prayer. The Sunday Mass is celebrated in St John's Church. Accommodation in flats and houses on the site is provided for married students whilst single students live in the rooms once inhabited by the SSJE brethren.

The buildings of the college provide a catalogue of interesting and important aspects of Anglican history. The Founder's Chapel — where the SSJE community prayed daily until the later completion of what is now the college chapel — was where Dietrich Bonhoeffer is reputed to have decided to return to Germany where he met with martyrdom.

The house has always been located in the Anglo-Catholic tradition of the Church of England with an emphasis on the formation of the person in their journey toward ordination. At the heart of the college is prayer with Morning and Evening Prayer and ordinands are required to attend both. The daily Mass also provides a critical point of spiritual nourishment. Theological training appropriate to the person is provided, as is time for ministerial preparation. Ordinands are expected to take an active part in the life and work of the college, serving at dinner, keeping up the gardens and cleaning the church and chapels.

Sports are often popular and teams are fielded for a variety of university games, although it does somewhat depend on the enthusiasm of the students. The college currently has its own football team which has competed against other Christian ministry training establishments in Oxford as well as Pusey House. The college's football team had particular success in the early 1990s when victories were scored over the other Anglican theological colleges in Oxford as well as similar establishments in London, Birmingham and Salisbury.

The college has a good musical tradition with a variety of traditional and contemporary music being used at major liturgies and a choir made up from within the student body. The chapel contains a small chamber organ and St John's Church a larger instrument with a case above the north side of the rood screen.

The college had in the past, a reputation for being "camp" and attracting a number of gay ordinands, especially in the late 1960s and early 1970s. David Hope, later Archbishop of York, was recruited as principal in 1974 to rein in excesses and to ensure the college remained on track in its mission.[5] A.N. Wilson fictionalised this turn of events in his novel Unguarded Hours. Prominent gay cleric Jeffrey John is an alumnus. Wilson writes that in his time there, some students were given opposite-sex "names in religion".[6]

In 2012-13 major refurbishments took place in the church and cloisters, and the church of St John the Evangelist (SJE) is now regularly used as a concert venue. Seating up to 500 in comfort, it is becoming an important venue for both local and international performers. Concerts have been held by Harry Christophers' the Sixteen and the European Union Baroque Orchestra.

Theological education and the wider church

In recent[clarification needed] years the college has extended its ministry to the wider church with programmes of teaching open to the general public. Every year there are two summer schools in June on "Understanding Islam" and "Christian Apologetics". Between 2009 and 2011 there was a conference on ecclesiology around Epiphany each January organised by Fr Andrew Davison, one of the tutors in Christian doctrine. The college also welcomes sabbatical guests and visiting scholars.

People associated with the college

Many former students, in the tradition of the college, go on to minister in urban priority areas and parishes which suffer poverty and deprivation.

So far every principal has been an ordained Anglican priest.